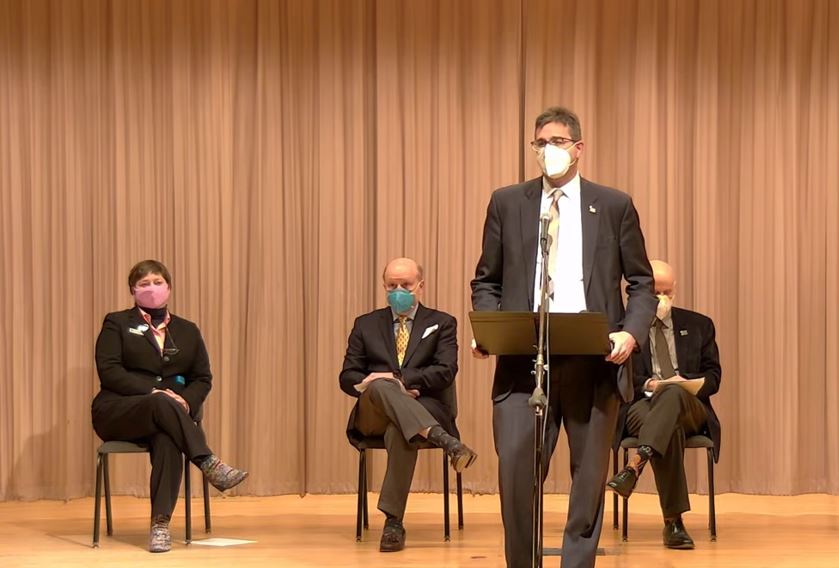 New Castle County Executive Matt Meyer, at microphone, was one of many officials expressing their gratitude for the bequest.

A Wilmington music lover has left $10 million to the Music School of Delaware, a donation officials call transformative and say will help fund 80 scholarships a year in perpetuity.

Mary Ellen Northrop, a tax analyst who also played clarinet, began contacting a Music School development officer in 2013 asking about the school. Eventually, Northrop said she would like to do something for the school, but wasn’t specific about what.

After she died in June at the age of 78, Music School officials were surprised to discover that Northrop had left it the largest gift it has received in its nearly 100 years.

“We are beyond thrilled, obviously, to receive this,” said John du Pont, chair of the Music School board, during a livestreamed event Tuesday. The Music School has an annual budget of $2.5 million and about 2,500 students each year.

Those at the school never met Northrop, but stayed in touch with her over the years, and were stunned to learn from Northrop’s executor that she had left $10 million.

“This is a life changing event that will help a lot of people,” du Pont said.

Northrop loved music and participated in programs at  local churches, playing clarinet solos and singing in the choir, a press release said.

Music School treasurer Larry Hamermesh said the Mary Ellen Northrop Endowed Fund for Music Education is set up as an endowment account that will generating earnings for the scholarships.

Kate Ransom, president and CEO of the school, said that the scholarships will be open to new and current students.

“We certainly hope the influx of new students each year is augmented by the availability of these scholarships,” she said. “We want to reach more students, and believe that is what Ms. Northrop wanted.”

Assuming a 4% return on the money, the endowment should support about 80 scholarships of up to $5,000 for the first year for students from preschool through twelfth grade, Hamermesh said.  The scholarships can be used  for tuition, voice lessons, instrument purchase or instrumental rental — but not guitars or guitar lessons, per Northrop’s instructions.

The scholarships also can be used to participate in the Music School’s ensembles such as a youth orchestra or other musicianship classes at the school.

“It does get complicated,” he said.

The scholarships are open to students from public, private and parochial schools, but not charter schools, Hamermesh said.

The scholarships also will be targeted to families that have a federal gross income of less than $150,000. The funds for music lessons are not given to families, but go straight to the Music School, he said.

Hamermesh said the Music School, which provides lessons up and down the state, hopes to find a way to offer scholarships to guitar and charter school students.

The school’s biggest challenge will be finding ways to help the students after the second year of the scholarship, he said.

Even so, he said, “We’re extremely excited to be able to see how this could extend the reach of music education in the state of Delaware.”

The school did not have a photo of Northrop.

“This magnanimous gift will enable the Music School to extend its standard-setting individual and group  instruction to families who otherwise could not participate,” Ransom said. “We are so grateful to Mary Ellen Northrop for leaving a legacy that will make a profound difference in  the lives of young musicians in Delaware.”

Help after Ida: Delaware power crews to be in Louisiana Wednesday
Advocates ask Delaware to prioritize vaccines for Type 1 diabetes
From Wilmington to Bethany, your fireworks guide
State GOP predicts ‘red wave’ in 2022, plans to kick off campaign Monday