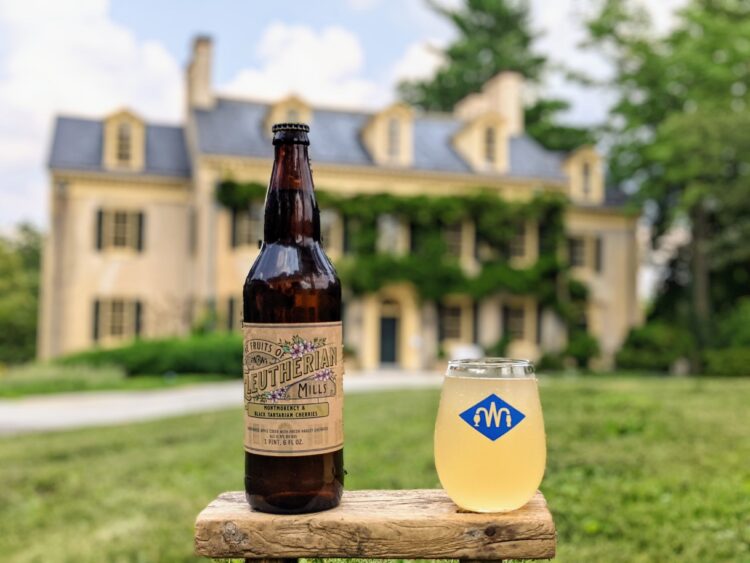 The Fruits of Eleutherian Mills cider, made with cherries from Hagley by Wilmington Brew Works, in front of the du Pont home for which it’s named

Most people know Hagley Museum & Library as the birth of the DuPont Co.

Along the banks of the Brandywine River, E.I. du Pont built Eleutherian Mills, his gunpowder yard and ancestral home.

By 1804, the patriarch had also created an enviable orchard with nearly 400 of prized peach, pear, apple, plum and cherry varieties. The family sold some of the fruit to employees, many of whom lived on the land. They also made alcohol.

A collaboration grew from that conversation, and beginning Wednesday, July 21, cider-lovers can taste the Fruits of Eleutherian Mills, a “bone-dry” cider available in 22-ounce bottles for $15. It’s also on tap at WBW.

The limited-release cider rides the wave of a ripening trend. Cider is one of the fastest-growing segments in the entire alcohol industry, Rice said. WBW now devotes three on-site taps to cider.

Typically made with fermented apple juice, the beverage can be sparkling or non-sparkling. Since it’s gluten-free, it has a ready-made audience. But good cider has become a go-to for a variety of consumers.

“More and more people are experiencing what craft cider can be,” Rice said. “You can have a cider that’s nothing but apples to a cider that has apples and seven other fruits.”

The label of the new Hagley-Wilmington Brew Works cider made from fruit picked at Hagley.

It took two days to pick the fruit and five hours to remove the pits. When Rice was finished, he had 15 pounds of cherries ready for processing.

He and WBW CEO and brewmaster Craig Wensell decided to ferment the apple and cherries together using a simple recipe.

“We wanted to keep this as close to what we think they would have made at Hagley in the early 1800s,” Rice explained.

After 11 days of fermentation and three weeks for maturation, the cider was ready. It’s dry and tart, with a subtle cherry finish and effervescence.

Visitors to Hagley can tour the existing orchard, which once covered the property from the Buck Road gates to Christ Church, said Paul Orpello, Hagley’s director of gardens and horticulture.

Much of that land is now turf fields, large trees and residential housing.

There were just 18 trees in 2018 when Orpello came on board.

“We sourced and replanted 32 of the original varieties that make up the orchard today,” he said. “We are limited to the 50 trees due to constraints of Hagley signature events, such as our fireworks and car show.”

Fifty trees are more than enough for Rice. After all, peach season is right around the corner.

The Fruits of Eleutherian Mills cider, made with fruit from Hagley by Wilmington Brew Works, in front of the du Pont home for which it’s named

The Fruits of Eleutherian Mills cider, made with fruit from Hagley by Wilmington Brew Works, in front of the du Pont home for which it’s named

Paul Orpello, Hagley’s director of gardens and horticulture, picks cherries in the orchard

These Montmorency cherries were picked at Hagley