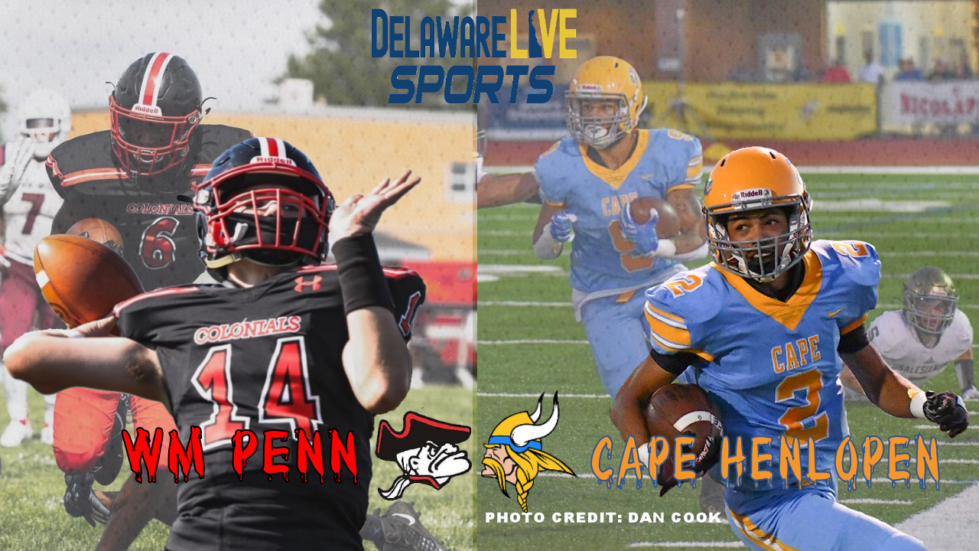 The fireworks began on the opening kickoff and the Colonials and Vikings kept that pace throughout the game totaling 90 points between them and the teams combined for 761 yards in total offense.

In the end two Cape Henlopen turnovers led to scores for Wm Penn and the Colonials left Legends Stadium with a 52-38 win in a Class AAA non district contest.
“This is the most exciting football game I have ever been a part of in my coaching career, let me tell you Cape is a very good 0-3 team,” Wm Penn head coach Matt Sabol said.
The excitement started on the opening kickoff when Cape Henlopen’s Maurki James returned the kick 80 yards for a touchdown. Hank D’Ambrogi’s kick was no good and the Vikings took an early 6-0 lead.
Wm. Penn answered on their first drive of the game when Jacob Tiberi connected with David Dunston for a five yard touchdown pass. Jordan Jones added the PAT and the Colonials led 7-6 with 8:33 to play in the first quarter.
Tiberi finished the game completing 18 of 23 passes for 285 yards with two touchdowns and one interception.
The back and forth continued as the Vikings answered when James scored his second touchdown on a 2 yard run. D’Ambrogi ran in the two point conversion giving Cape Henlopen a 14-7 lead with 1:36 left in the first quarter.
Tiberi struck again early in the second quarter when he found Tayvione Squarrell for a 25 yard touchdown pass. Jones was good on the PAT kick and the score was tied at 14-14.
Cape Henlopen would need just 14 seconds to answer the Colonials score when Chancler Johnson went off the left side for a 54 yard touchdown run. D’Abrogi added the point after kick giving the Vikings a 21-14 lead with 10:02 to play in the first half.
Tiberi and Dunston hooked up again this time on a nine yard touchdown pass. On the PAT the Colonials faked the kick and Tiberi rolled out to the right finding Squarrell in the front corner of the endzone for the two point conversion. Wm Penn led 22-21 with 4:58 left in the first half.
Cape Henlopen continued the back and forth battle when Thomas Messick went around left end, down the sideline and then cut back to the middle of the field for a 20 yard touchdown run. Daniel Saez plunged in on the two point conversion and the Vikings took back the lead 29-22 with 3:05 to play in the first half.
As Wm. Penn drove into Cape territory Jack Schell came on a blitz and sacked Tiberi causing a fumble, Malaki Lewis recovered the fumble at the Colonials 42 yard line with just a minute to play in the first half.
Cape Henlopen drove down to the Wm. Penn seven yard line where they settled for a Hank D’Ambrogi 24 yard field goal taking a 32-22 lead into halftime.
The Vikings would increase their lead with 7:06 to play in the third quarter on a 67 yard touchdown run by Johnson, his second touchdown of the game. The PAT was blocked and the Vikings jumped out to a 38-22 lead early in the second half.
With 1:31 to play in the third quarter Wm. Penn would score the first of 30 unanswered points to close out the game. Holman scored on a three yard touchdown pass from Tiberi followed by a Tiberi to Squarrell pass play for 35 yards. The Colonials converted both of the two point tries tying the game at 38-38 with :18 to play in the third quarter.
Squarrell caught five passes for 140 yards and two touchdowns for the Colonials.
Holman would add touchdown runs of one yard and 46 yards in the fourth quarter as the Colonial took a 52-38 lead with just 3:15 to play in the game.
The go ahead touchdown was set up by a one handed catch by Holman in traffic in the middle of the field giving Wm. Penn a first and goal.
“Oh my, we were at a fourth a seven thinking do we punt or go for it. We were looking to get a match up on a linebacker and Markell and Jacob got a great read on it,” Sabol said.
Holman rushed for 202 yards on 25 carries, caught five passes for 96 yards and scored three touchdowns for Wm. Penn. This was the third 100 yard plus game of the season for Holman.
“Markell is kind of the heartbeat of our team right now, he’s got some meat on him and is tough to bring down. Our offensive line did a great job giving him room to run tonight,” Sabol said.
Cape Henlopen had some stars of their own in taking the loss. Johnson rushed for 173 yards on seven carries with two touchdowns. James scored a pair of touchdowns and had an interception for the Vikings.
Cape Henlopen travels to Dover on Thursday, September 23 with kickoff at 5:00pm. Wm. Penn will host Hodgson on Saturday, September 25 for their homecoming. Kickoff will be at 2:30.