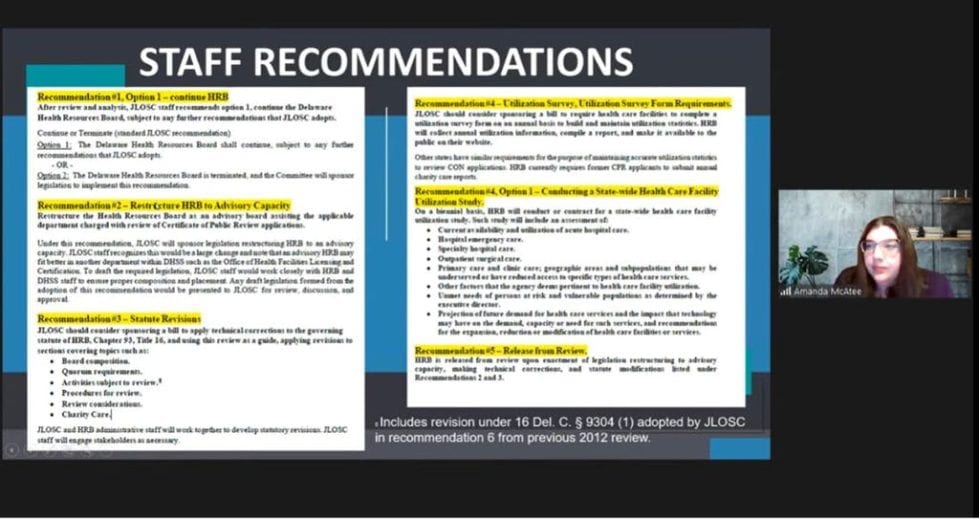 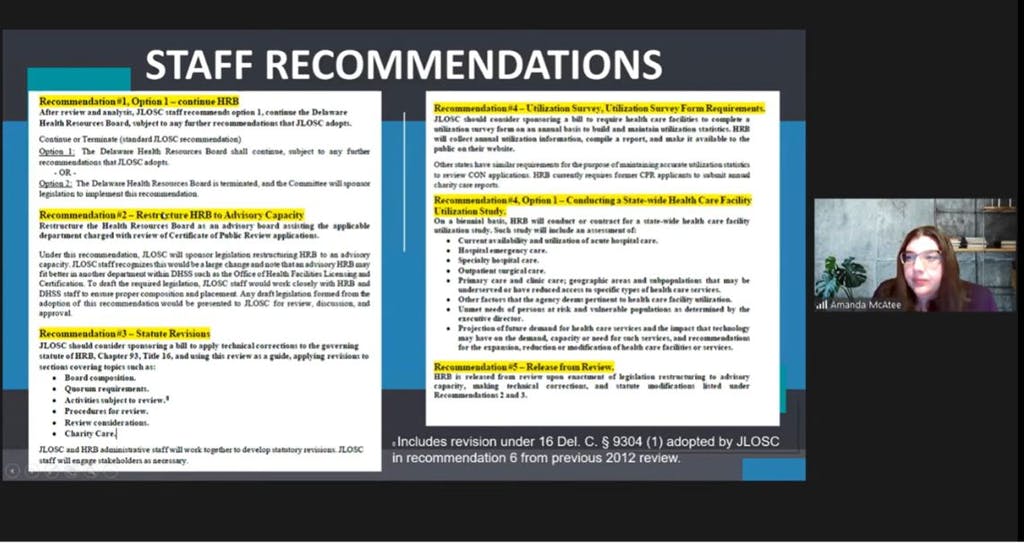 A board display details recommended changes to the Health Resources Board.

UPDATE: Comments have been added from representatives of the Caesar Rodney Institute and the Delaware Healthcare Association.

A vote to kill Delaware’s Health Resources Board and a vote to keep it both failed in a committee charged with reviewing the board’s function and viability.

That means the Joint Legislative Oversight and Sunset Committee will continue to consider their options about the powerful health board at a future meeting.

For the time being, the Resources Board can continue to function as it always has. The votes, however, illustrate the high feelings over the politically and financially charged decisions the board makes about which entities are allowed to offer new healthcare services and build new facilities.

Ultimately, that translates into what residents pay for their health care and whether they have it nearby.

The Sunset Committee staff recommended last week that the Resources Board be shrunk from 15 members to about five and turned into an advisory board that held public meetings, with research and decision-making shifted to the board’s administration.

But before the Sunset Committee can vote on that option, under board rules it must first vote to continue the board’s existence.

Rep. Sherry Dorsey Walker, D-West Wilmington, broke from the ranks of her fellow Democrats to vote yes on abolishing the board, and then no on allowing it to continue. That made the vote 6-5, and committee rules require at least seven yes votes.

Even if the Sunset Committee does vote to continue the board and change it to an advisory capacity, those changes must be made into bills that will then be introduced into the legislative process.

Dr. Christopher T. Casscells, health policy director for the Caesar Rodney Institute, thinks the board should be abolished.

“The review and research were scathing,” he said in an email. “The board is dysfunctional and serves only as a deterrent to medical services in Delaware.”

Even so, he said, “I was very impressed by that review report and the whole process. Remarkably missing from an otherwise damning report and survey was any reason to continue the Health Resources Board, except that it exists. The Sunset Committee did a very good job of dressing down the HRB, but still threw it a tenuous lifeline.”

Christina Bryan, director of communications and policy at the Delaware Healthcare Association, which represents hospitals, listened to the Sunset Committee meeting Thursday.

“We’re hopeful that Joint Legislative and Sunset Committee will vote to approve that the board continues, but continues in a much improved format,” Bryan said. “We support the Joint Legislative and Sunset Committee’s recommendation to basically overhaul the board and turn it into an advisory board instead of its current formula, which should make it more efficient, faster for our hospitals to complete their project reviews, quicker for the project to get up and running, and avoid a lot of the quorum issues that the board has been plagued with for years.”

The harsh review of the Resources Board said conflicts of interest among board members “negatively impact” the review of healthcare projects,  and board attendance problems cancel meetings and so prevent the system from meeting its own published project deadlines. It also said the board has insufficient independent data to review applications, relying on information provided by applicants.

In addition to shrinking it to an advisory board, the Sunset Committee staff recommended raising the thresholds for capital expenditures that trigger reviews from $5.8 million to at least $30 million. Maryland’s is $50 million, pointed out Amanda McAtee, an analyst with the Legislative Council’s Division of Research.

The staff report recommended  narrowing reviews to projects that included establishing a long-term facility, changing the number of long-term beds in an existing facility by 10, and for-profit acquisitions of a non-profit health care facility. Non-profit acquisitions of another nonprofit would not need review. It also pointed out that a Resource Board review banning new acute care facilities since 2009 needs to be put into law if it continues.

Rep. Lyndon Yearick, R-Camden/Wyoming, praised the idea of raising the trigger thresholds and noted that the healthcare business environment has changed in the last decade.

Healthcare companies once seemed to have agreements about whose territory was whose, but not anymore, he said. Many are putting in services very close to each other, which he said a drive around Sussex County would prove.

On Thursday, those who want to abolish the board argued that the many state licensing and permit hoops for new businesses negated the need for the Resources Board, that it routinely overlooks  local needs and that a free market would better serve Delaware’s needs.

Those who want to keep it said it helped prevent non-profits from cherry-picking locations and populations to serve and that the board helps make sure services are put where they can help people.

Walker said she had not received many positive comments about the Health Resources Board.

“I’m not sure of the reason for the existence of this particular board,” she said, and asked people who served on the board for clarity.

Resources Board Chairman Brett Fallon said it looks at whether the project is profitable and consistent with board purposes outlined in the Health Resources management plan. That includes the needs of the population, availability of less costly alternatives, the immediate and long-term viability of the proposal and any anticipated effects on the quality and the costs and charges for healthcare.

“So we look at a number of other factors that perhaps wouldn’t be looked at in a so-called free market system,” Fallon said.

Elizabeth Massa, executive director of the Health Care Commission, which oversees the resources board, pointed out that its hearings allow for public scrutiny of an application and that the board is always looking at cost, access and quality.

Sen. Kyle Evans Gay,  D-Elsmere, and chairman of the Sunset Committee, noted that it had received many comments about allowing the free market to rule.

When she asked Fallon to speak to that, he said that the board is a passive organization, meaning it doesn’t do anything to solve a health care need like find more physicians for a rural area. It only rules on what it’s brought.

Sen. Brian Pettyjohn, R-Georgetown, said that the board’s actions often didn’t match its state purposes. He pointed to a case in which the board said no to free-standing emergency rooms in Georgetown. Then it approved a hybrid one that offered both ER and urgent care options in the same facility, but it was located closer to existing facilities than the town. It was approved with by the full board with no discussion, even though a subcommittee reviewing the project had voted 2-1 to turn it down, which was odd, McAtee noted.

Supporters of keeping the Health Resources Board argue that it will prevent national for-profit companies from coming in and cherry-picking sites and populations to serve.

Pettyjohn agreed that could happen.

“But at the same time, I think that the HRB has fallen flat on its purpose, and that is to make sure that we have that care and those facilities available to our communities that absolutely positively need it,”

Dr. Nancy Fan, chair of the Delaware Healthcare Commission, said she thought the Sunset Committee’s review was needed and important. She said she agreed with the criticism and with Pettyjohn that its decisions have “not been optimally exercised and implemented.”

But, she said, “That doesn’t mean you need to throw out the baby with the bathwater.”

She pointed to Philadelphia, where multiple for-profits compete for properties and close them as they wish, without regard to the needs of the people around them.

“But that doesn’t mean that 21st century healthcare needs no oversight, no review, no monitoring because I’m not so sure that within our state market forces will actually be able to improve on that purpose, be able to align access,” Fan said.

Dorsey Walker pointed out she had excellent health care near her, but knew that people in Sussex County did not. She asked if the board could add requirements to consider equity and fairness to the seven criteria the board uses to make decisions, and McAtee said it could.

Rep. Jeffrey Spiegelman, R-Clayton, said that as a commercial real estate agent, he was well aware of all the hoops any new business had to go through to open, from construction approval through business licenses, but no other business segments had to contend with something like a Health Resources Board.

“Why is this in place for this specific industry, but no other industries tend to have to go through something like this, not even childcare,” he asked.

“Is it needed,” she asked. “That’s what we’re talking about and that’s what would be discussed when going through the whole drafting of the bill process.”

Spiegelman said the process is maddening.

He said other companies that would invest in Delaware are likely to look at the process and decide to spend their money elsewhere.

When both votes failed, Pettyjohn pointed out that if nothing else, the votes put the Health Resources Board on notice that people were watching.

State officials blame Delta variant for rise in COVID-19 cases
COVID cases decline; more than 200,0000 vaccines given; state continues testing
20 educators to vie for title of Teacher of the Year
Tatnall's second quarter run proves to be too much for Friends