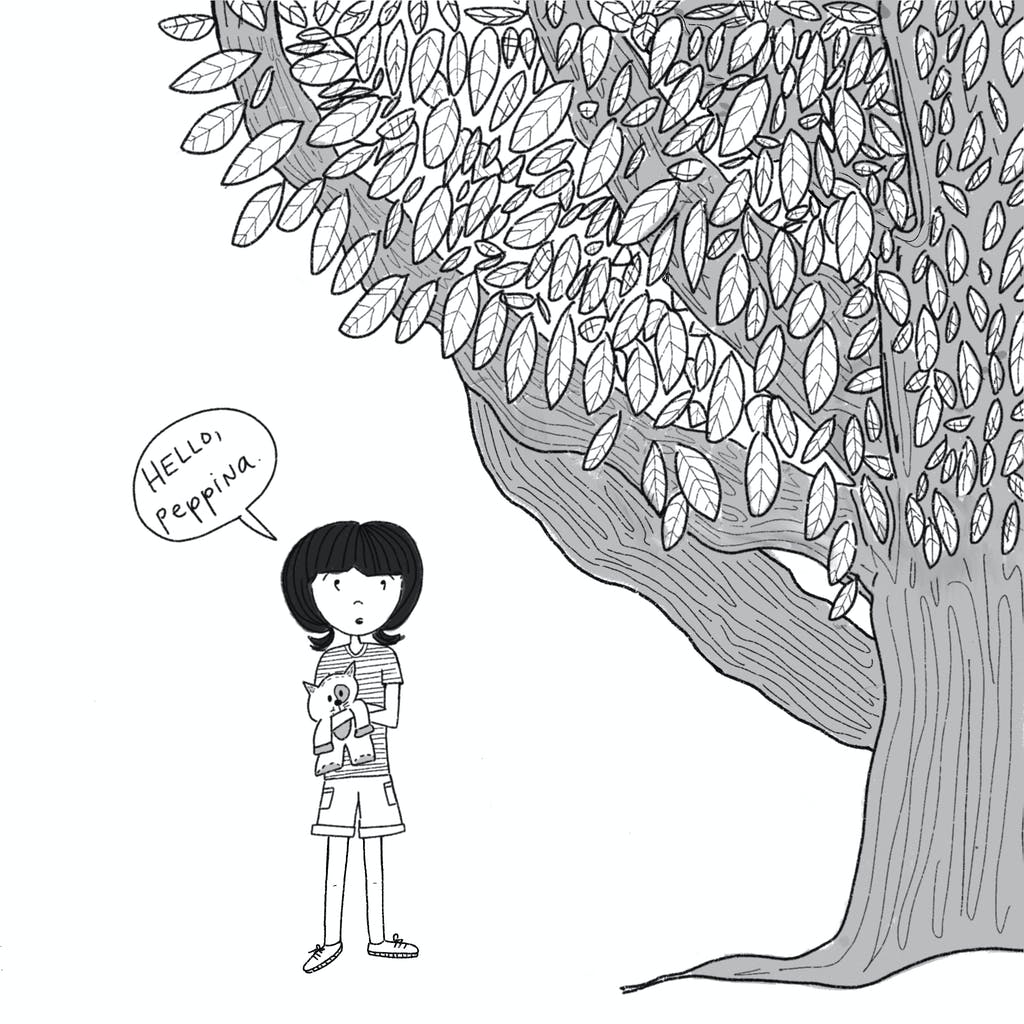 Middletown author Erin Entrada Kelly never climbed a tree, but the main character in her new book, Marisol, will by its end.

The story of the introspective 8-year-old in “Maybe, Maybe, Marisol Rainey” was ripped from the pages of Kelly’s own life in southern Louisiana, but is a departure for the Newbery Award-winning writer.

She  previously focused on young adult novels before tackling this new series for elementary-aged readers. The book also marks the first time she’s illustrated her own book.

“I feel like there’s a lot of books for elementary readers where the characters are very loud and proud and kind of getting into trouble and mischief,” Kelly said. “But I wrote this book for the other kind of kids, the ones who are quiet and have a big interior life. They might not be the loudest kid in the neighborhood, but they have a lot going on in their imaginations, and I want those kids to also have books about them.”

After plans were made for a Marisol series, Kelly said she struggled with finding Marisol’s voice.

“Then my editor suggested I just basically base Marisol off myself,” Kelly said. “So it’s about a girl who is 8 years old. She lives in Louisiana, which is where I grew up, and she has a lot of fears and anxieties. One of the fears she has is climbing the tree in her backyard that everyone else climbs very easily.”

Like Kelly, Marisol loves her stuffed animals and to watch silent movies. She likes to name everything in her house and yard because she believes it’s all alive and needs proper names. The refrigerator is named Buster, for silent film star Buster Keaton, her dresser is named Maple and her tree nemesis is named Pepinna.

Like Kelly, Marisol is Filipina-American, with a mother who grew up in the Philippines. That made Kelly feel set apart and struggle with her place in the world. Kelly’s mom immigrated to the U.S. after she fell in love with an American soldier stationed in the Philippines during the Vietnam War. She worked in retail when Kelly was in school, but later became a nurse.

Her dad was from Kansas, but had a job as a branch manager for a finance company that sent him to Louisiana to work.

Even though the book will arrive in bookstores May 4 amidst the tide of #StopAsianHate, Kelly said that doesn’t come into play in “Marisol” and it’s not really what the book is about.

“I think it’s important, it’s definitely important, for young people of all backgrounds to be able to pick up a book and see someone who looks like them or whose family looks like theirs,” she said. “But it’s also important for for kids to read books that have families that are different from theirs as well, so that definitely plays a role in my works in general.”

“So it’s kind of been a part of my life, my whole life, just kind of like an escape,” she said.

Her books are well-received. She won the 2018 Newbery Medal for “Hello, Universe,” an intertwined story of two boys and two girls finding their own inner heroes. She also won awards for “The Land of Forgotten Girls” and “Blackbird Fly.” Her sixth book, “We Dream of Space,” was also her first historical fiction, based in the weeks leading up to the 1986 Challenger disaster. 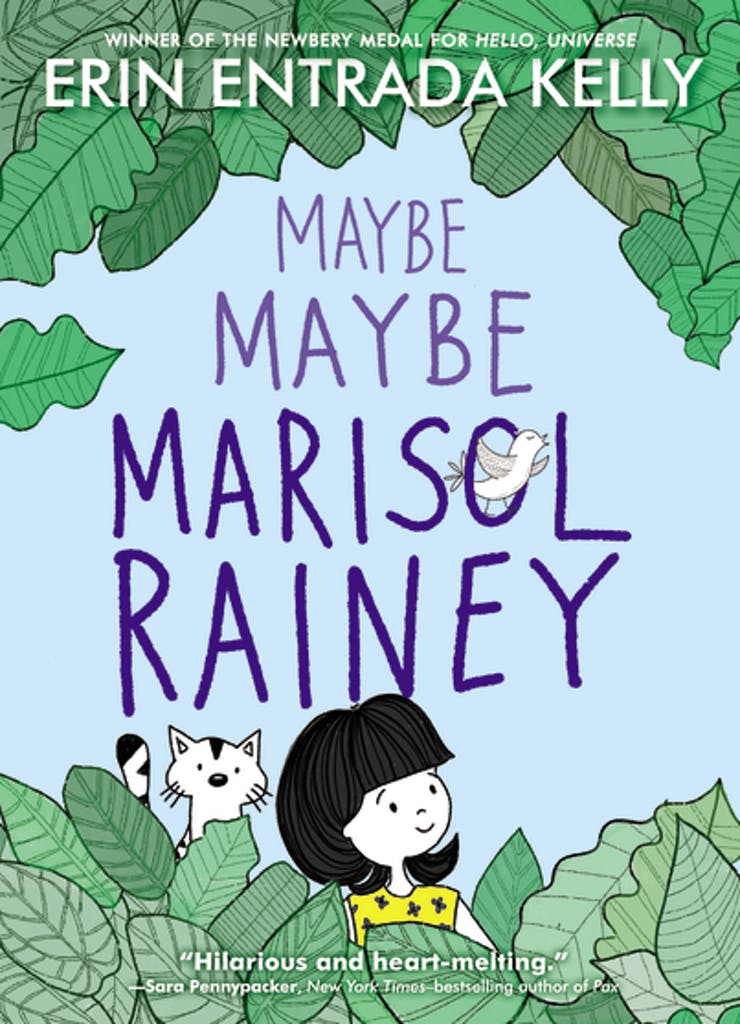 ‘Maybe Maybe Marisol Rainey’ will come out May 4.

“I love writing for kids,” she said. “I really love the idea of being able to speak to younger kids. A lot of the school visits and things that I do are for middle school, and I really liked the idea of being able to go into elementary schools and connect with kids at that age. I just love kids. They are very honest and they’re a great audience, and they make me laugh.”

While Kelly still hasn’t climbed a tree, she plans to do it soon with her writing partner, Sharon Huss Roat of Kennett Square, author of “Between the Notes” and “How to Disappear.” They met at a book festival, became friends and check in each week on their writing projects.

“Erin writes the kind of books you want to hug when you’re finished,” Roat said in an email. “She’s an incredibly kind and empathetic person in real life, and that comes through in her stories. Her characters struggle and stumble and learn and grow in all the ways her readers do. She doesn’t shy away from difficult topics or hard truths, but she provides a safe, gentle space to explore them. It kind of feels like she’s holding your hand while you’re reading.”

Kelly said Roat’s scouted some trees for her to climb, but they haven’t set the big day yet.

“Maybe, Maybe, Marisol Rainey” was written partly during the COVID-19 pandemic, but all the illustration and edits all fell into it. Like so many, Kelly said she’s ready for summer and ready to get out into the post-vaccinated world.

“I’ve got all these summer dresses and spring dresses because I’m constantly trying to manifest the warmer weather,” she said last week.

Now 43 and the mother of a grown daughter, she and her partner, Daniel, moved to Middletown from Pennsylvania two years ago. It’s been a a peaceful place to get work done and easy to get other places she needs to for work, such as New York City. There are many aspects of the area that remind her of south Louisiana, such as broad swaths of land, she said.

Kelly has a bachelor’s degree in women’s studies and liberal arts from McNeese State University and a master’s of fine arts from Rosemont College. In addition to writing, she also teaches in the MFA programs at Rosemont and Hamline University and teaches fiction with the Gotham Writers Workshop.

She has become a huge fan of Delaware’s library system, particularly the Odessa Library and can’t wait to see how the new Middletown Library now under construction will turn out.

She’s also a huge fan of the Delaware Art Museum. “I often go there,” she said.

While Kelly said she hasn’t really been able to explore Middletown or the area as much as she would have liked because of the pandemic, she does have a post-lockdown Middletown bucket list.

“So, once lockdown is over, and things are back to whatever the new normal is, I want to try out for something there, like a little small role, but just I just want to have the experience my daughter did in community theater.”