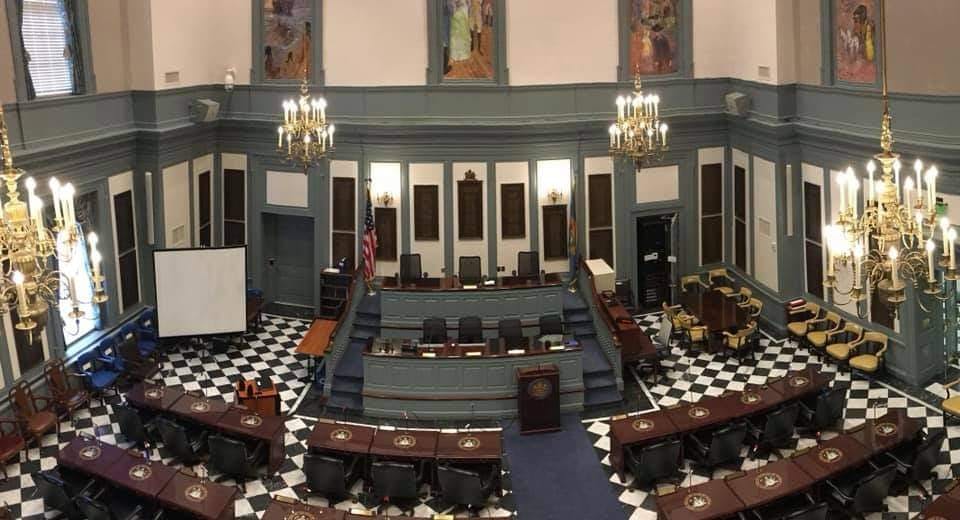 Legislative efforts to remove Kathleen McGuiness from office seem likely to fail, based on state rules

With embattled Delaware State Auditor Kathy McGuiness refusing to step down in the wake of her criminal indictment some legislators are pursuing other means to remove her from office.

Accompanying the resolution is a joint letter that asks the House and Senate Democratic leadership to hold a vote on the measure when the assembly reconvenes on Nov. 1 to consider redistricting legislation.

“We speak for our constituents,” the letter reads. “The Auditor has been asked by House and Senate leadership to temporarily step down while the court process unfolds. She has refused to do so. We have a responsibility to our constituents and we respectfully request this resolution be heard in the interest of public trust.”

It doesn’t appear that Wilson-Anton and Smith will be successful in their efforts.

Article III §13 of the Delaware Constitution allows the governor to remove any officer, except the lieutenant governor and members of the General Assembly, for “any reasonable cause” and upon a two-thirds vote of both the House and the Senate.

The same passage requires, however, that the individual subject to removal from office must receive notice, along with the alleged cause for removal, at least 10 days before the day of the General Assembly’s vote.

While the joint letter and resolution were announced on Oct. 22 — exactly 10 days before the Nov. 1 special session — the resolution does not appear to have been officially filed and it’s unclear what constitutes “notice.”

Drew Volturo, a spokesman for the House Democratic Caucus, said that the relevant section of the Delaware Constitution has never been used before so there’s no precedent to follow.

“House attorneys are researching the issue to determine what the proper and constitutionally valid process is,” Volturo said. “However, initial legal analysis indicates that the email circulated last week, which included a draft resolution, may not constitute proper notice as required by the Constitution.”

He said that at a minimum, the 10-day notice required in Section 13 would begin after a resolution has been filed.

“The House is not in session and, as of now, no resolution has been filed,” Volturo said. “The attorneys’ research on this is continuing.”

Wilson-Anton declined to comment and Smith could not be reached.

McGuiness’s attorney, Steve Wood, said that regardless of the 10-day rule, the indictment against the auditor does not constitute “reasonable cause” for the governor to remove her.

“In every criminal trial in Superior Court, the jury is told by the presiding judge that the indictment is merely the process by which a charge is brought against the defendant. It is not in itself any evidence of the guilt of the defendant,” Wood said in a statement to Delaware LIVE News. “For that reason, the mere fact of an indictment cannot constitute ‘reasonable cause’ as required by the Delaware Constitution.”

Wood also said that members of the General Assembly have, in the past, been charged with crimes while in office.

“Some of those crimes were violent crimes,” Wood said. “But never in history has the General Assembly attempted to remove one of its own simply because of a mere allegation of criminal conduct.”

Brown is expected to appear in court on domestic assault charges on Dec. 1 and Bennett faced similar charges before they were dropped at the victim’s request.

In neither case was the accused party subject to so much as an ethics hearing.

Democratic leaders in the House and Senate previously stated that they would not pursue impeachment proceedings or removal from office against McGuiness out of respect for her right to the presumption of innocence.

However, both chambers’ leaders have encouraged the auditor to take a voluntary leave of absence pending the outcome of her criminal proceedings.

The Democratic leaders in the House and Senate did not ask the same of Brown or Bennett.

“The investigation is ongoing and we do not wish to complicate, jeopardize or otherwise interfere with the investigatory process or the criminal proceedings that have been initiated,” Reps. Pete Schwartzkopf, Valerie Longhurst and Larry Mitchell said in a press release. “We will closely follow developments in this case and are keeping all constitutional options open and available.”

A similar statement from the Senate Democratic Caucus followed, in which Sens. Dave Sokola, Bryan Townsend and Tizzy Lockman reaffirmed their belief that “an accused person deserves their day in court” but noted the “scale of the charges both shatters the public’s confidence in Auditor McGuiness’ ability to serve as a watchdog of government finances and prevents her from meeting the duties and obligations of her office.”

If the bipartisan resolution calling on the governor to remove McGuiness from office is unsuccessful, the only remaining legislative option is impeachment.

Impeachment of an executive officer is unprecedented in Delaware but would look similar to federal proceedings.

According to Article VI of the Delaware Constitution, the House of Representatives has the sole power to impeach an elected official and a successful impeachment requires the concurrence of two-thirds of the members.

For the impeached individual to be removed from office, the impeachment must be tried in the Senate during a special session and two-thirds of the members must vote to remove.

Without any indication that leaders in either chamber are planning for impeachment proceedings against the auditor, her attorney says she is focused on doing the job that she was elected to do and has no intention of stepping aside.

“Auditor McGuiness asks for the same patience and respect for the presumption of innocence that the General Assembly has historically afforded its own members when they are charged with crimes,” Wood said. “The Constitution demands no less.”