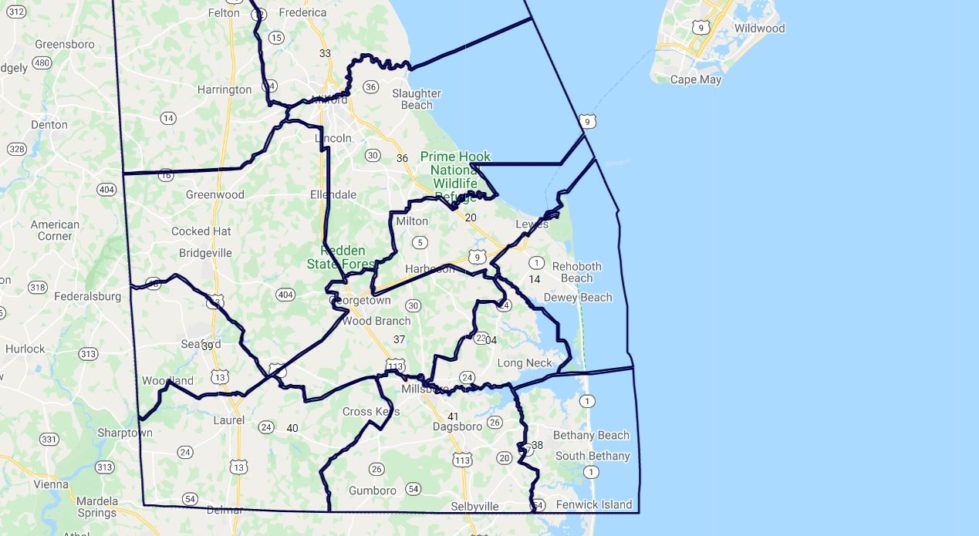 House Democratic leadership has released their proposed redistricting maps and Sussex County will pick up a seat — that of embattled Representative Gerald Brady, a Democrat from Wilmington.

The House of Representatives will convene in a special session on Nov. 1 to finalize the maps that will define Delaware’s House and Senate districts for the next decade.

That’s just six days before the deadline for both parties to agree on redrawn districts, given that candidates must live in their constituent districts for at least 1 year prior to the Nov. 8, 2022 general election.

If the draft maps are adopted, Brady’s House District 4 will be relocated to Sussex County and will include most unincorporated areas of Millsboro, from west of the Mountaire chicken plant to Oak Orchard, Long Neck and Angola, all the way to Love Creek approaching the Route 24/Route 1 intersection in Rehoboth.

For Republican Rep. Ruth Briggs King, that means she’ll pick up a bit of ground west of Route 113 in Millsboro — an area she’s familiar with having represented that area before redistricting a decade ago.

That area would include Piney Grove, Shortly and Hardscrabble, currently represented by Republican Rep. Tim Dukes in District 40.

“I have done so much work and it was a promise and a commitment from the first day I took over in the Oak Orchard, Long Neck area to address some of the flooding, the drainage and water issues, and finally getting the funds together and the first part of that project being fixed,” Briggs King said in a statement to Delaware LIVE News.

She said throughout the past decade she’s developed relationships in those areas and she’ll continue to advocate for those needs with whoever goes on to represent District 4, should the draft maps be adopted.

“I’m not surprised my district had to have a lot of changes this time because we had tremendous growth,” Briggs King said. “This was one of the fastest growing districts in the state and so I knew there would be changes — I just didn’t know exactly where those changes would be.”

The 37th Representative District grew faster than any other in the state, including coastal districts and areas like Middletown, which have seen an influx in out-of-state transplants in recent years.

Republican Rep. Rich Collins will pick up some ground in the southeastern part of his district near Roxana. In order to make that adjustment, Republican Rep. Ron Gray in District 40 will have to cede some territory near Williamsville.

Representative District 8 surrounding Middletown is currently represented by Democratic Rep. Sherae’a Moore. Currently, her district runs north along the Maryland border all the way to the Chesapeake and Delaware Canal.

Under the proposed maps, District 8 would stop short in Mount Pleasant where District 27 would begin, earning Democratic Rep. Eric Morrison some new voters.

To the east of that area, House Majority Leader Valerie Longhurst’s district will be sliced in half.

She’ll keep the eastern side of District 15, following Route 1 from St. Georges to Red Lion, but Delaware City and surrounding areas would become part of District 17, represented by Democratic Rep. Melissa Minor Brown.

District 17, which currently divides the town of New Castle, would lose a bit of ground in the northeastern part of the town.

If the draft maps are adopted, District 16, currently held by Democratic Rep. Franklin Cooke, would grow a bit to fill that void.

Republican Rep. Mike Ramone will lose a significant portion of District 21, including the Drummond Hill area. Ramone is one of the last Republicans standing in New Castle County.

Joining him is Republican Rep. Mike Smith, who will cede a bit of his district to Ramone around Cornish Hills.

District 10 in the Brandywine Hundred area will no longer include Arden, Ardencroft and Ardentown. Those areas are currently represented by Democratic Rep. Sean Matthews.

The remainder of the districts will remain more or less the same, including Christiana’s District 18, currently held by Rep. David Bentz, who has announced he is retiring. That district will shrink a bit near Ogletown, but not significantly.

None of the proposed changes are final.

The House Democratic Caucus will hold a hybrid online/in person public hearing on Monday, Oct. 18 where they will allow public comment on the draft maps.

A registration link for the 6 p.m. hearing is available on the legislative redistricting website.

The new legislative districts will take effect for the 2022 general election. Candidates in that election must reside in the new districts, and immediately following the November 8, 2022 election, legislators will begin representing constituents within the new district lines.