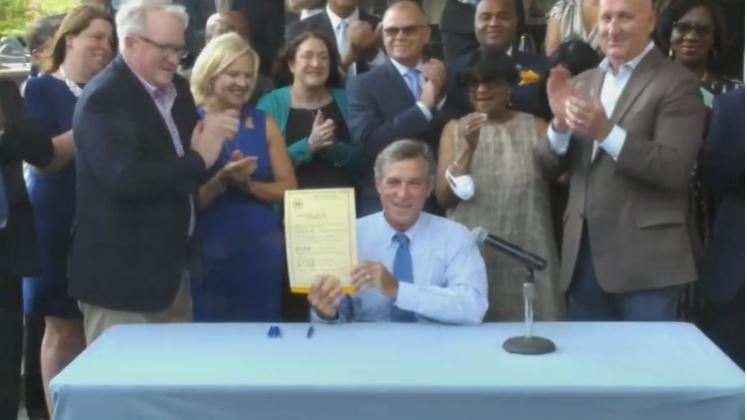 Delaware Gov. John Carney, a Democrat, signed a bill Monday which will incrementally increase the minimum wage to $15 per hour by 2025.

Senate Bill 15, sponsored by Sen. Jack Walsh, D-White Clay, and Rep. Gerald Brady, D-Greenville, passed along party lines in both the House and the Senate earlier this year.

The bill saw support from some businesses and union leaders but was met with opposition from small-business owners and local chambers of commerce.

Before signing the bill, Carney said that increasing the minimum wage would “lift up those lower wage workers so that they can provide the same opportunities for their children that the rest of us can.”

“We’ve been pretty clear on the issue,” he said. “We believe it should have been at least a year after we came out of the pandemic before any increase and no more than 50 cents a year.

“It already passed and not much we can do about it, but no one is going to see an increase in their pocket. Costs at the registers because of wage and product increases will take care of that.  I’ve said before, this governor and the state are not small business,  TRUE small business,  friendly.

Judy Diogo, president of the Central Delaware Chamber of Commerce, said no one disagrees that a person should be paid an honest wage for an honest day’s work, but government should not mandate how employers and employees negotiate pay.

“That’s always a concern for  us,” she said. “Do we think having this minimum wage bill right now is a good thing? No, we don’t, again, for those reasons. You know, employee pay should be negotiated between the employer and employee and it should be based on, you know, their years of experience and their skillset is what their wages should be predicated on.”

She said it was going to hurt small businesses and the youth of Delaware.

“I don’t think anyone disagrees that a person should be paid an honest wage for an honest day’s work, but when you are a business owner you have to put everything in perspective,” Diogo said.

Walsh said that his decision to sponsor SB 15 was easy, citing the principles he says the United States was founded on: “equality, fairness, and taking care of each other.”

Regarding the criticism that minimum wage increases could hurt small businesses and cost Delawareans their jobs, Walsh said that’s “simply not true – not true at all.”

“If you look at almost every instance in which we’ve raised the minimum wage, you see the unemployment rate in Delaware fall or remain flat – you see the labor force participation rate increase or remain flat – and you see Delaware’s GDP grow or remain flat,” Walsh said. “The reason is simple. Putting more money in people’s pockets means more bills getting paid, and more money going into cash registers, which results in a better economy for all of us.”

Walsh said that he drafted SB 15 in close consultation with local business leaders and trade groups.

“The bill is not a question of pro-business or anti-business,” Walsh said. “It’s a simple question of whether you believe in lifting people out of poverty or not.”

Late in the legislative session last month Republicans introduced eight amendments to SB 15 aimed at easing the minimum wage hike’s burden on small businesses and nonprofits, as well as tracking its economic impact.

All nine amendments were promptly shot down by Democratic legislators, who have a majority in both houses.