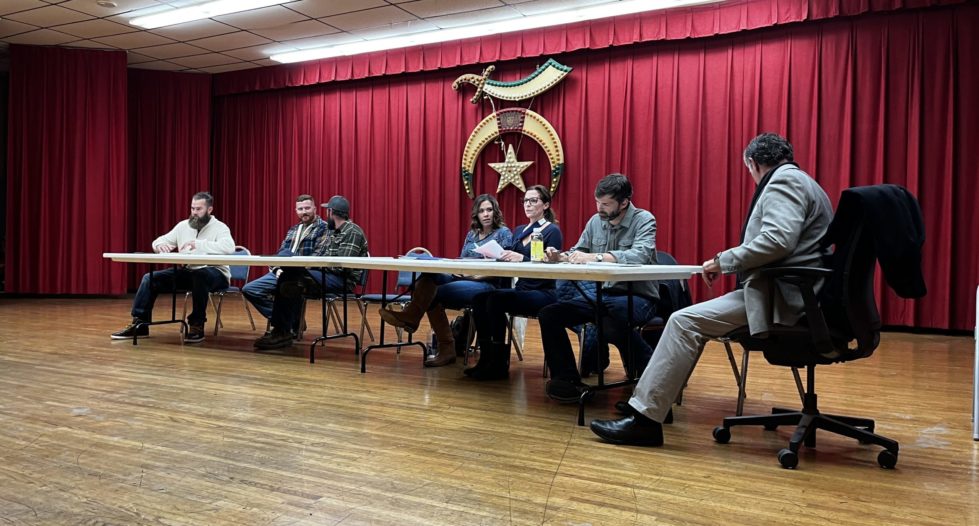 A meeting called by electrical workers to build momentum in their fight against a federal vaccine mandate drew 400 people Monday, many of whom seized the moment to air grievances against Democrats and COVID policies.

Members of International Brotherhood of Electrical Workers Local 1238 asked for the meeting after learning that they would be designated as federal contractors who must be vaccinated against COVID-19 by Jan. 4 2022.

The linemen planned the event and later asked the Delaware Medical Freedom Alliance, which opposes vaccine mandates, to hold a joint meeting.

The IBEW Local 1238 utility workers say they aren’t necessarily opposed to vaccinations, but they are opposed to being designated as federal contractors when most rarely work on federal projects.

Lineman Jamin Smith said Monday night that as he was preparing his comments, all he could think about were “all of the women and men that have already taken a stand against this mandate and lost their jobs.”

He said he stands in solidarity with those people in the fight for their “God-given right to make a choice.”

“The corruption of our system will always be here,” Smith said. “But I say let’s make a stand. Let’s make them a little nervous. And let’s make them second guess what the f**k they bring to the table.”

“It’s time to make a stand,” Thompson said. “Where does it end? How far is the government willing to go? I’ll tell you — as far as we let them.”

He said he’s opposed to the mandates because he doesn’t want his children to learn that he did nothing to stand up against government tyranny.

For that, he said, he’s “willing to lose everything I’ve ever worked for.”

“I’m not going to be the father who stands there as my kids are older and I pass this burden on and they look at me and say ‘why?’” Thompson said. “‘Why did we let this happen?’ Because money was more important? My job was more important? But what’s more important than freedom? That’s what this country was founded on. Freedom. And if we don’t stand up and do something, it’s gonna be gone.”

Two parents, who opted not to share their last names, spoke before the audience about mask and vaccine efficacy, homeschooling, Freedom of Information Act requests and COVID-19 tests.

Those remedies have not been endorsed by the NIH, FDA or CDC, which Hudson argued can be attributed to greed.

Rep. Steve Smyk, R-Milton, was the lone elected official to speak during the meeting.

“What you are seeing today is exactly what has occurred in history,” Smyk said. “The Bolsheviks did this, the Chinese did this, and one of the things that they did was they stopped tolerance. You either thought like they did or you didn’t get the opportunity to think.”

Smyk later clarified his comments, indicating that he was not comparing vaccine mandates to the Holocaust.

“To be clear, the Holocaust was a vastly different scenario than the complaint of the people,” Smyk said in an email. “They may have gathered against forced vaccines, but I interjected the values of freedom & liberty in our current government.”

Near the end of Smyk’s remarks, an attendee began a shouting match with the Milton representative, claiming that politicians like Smyk “have been in office for 10, 15 years and it’s not changing anything” and that “we are forming our own government — a self-government — we’re going to do it in five years and we’ve got the blueprint.”

The unidentified audience member continued on a tirade about a lack of Republican poll watchers and “Democratic Party [voting] machines.”

Smyk pushed back, saying, “She’s gonna have to have another seminar on her own.”

He said mandates like these are the result of voters electing people who support taking away constitutional rights. He also argued that the legislature needs to repeal a law that gives the governor “dictatorial powers over any kind of emergency.”

“There are legitimate emergencies like nuclear war, genuine biological warfare, that kind of thing,” Collins said. “But the General Assembly should never have been cut out. Right now people don’t understand: No member of the General Assembly has any authority to stop anything the governor doing by law, and the courts have not ruled that unconstitutional.”

Lineman Jamin Smith, who first spoke out against the federal contractor mandate and organized the meeting, said he doesn’t expect the legislators in attendance to do anything.

“I have faith in politics,” Smith said. “I just think at the level of politicians that we’re dealing with right now, this is sort of out of their control.”

He said his reason for inviting the elected officials was so that they could hear their concerns and see how many people are passionate about issues like the mandates.

Where the mandates stand

As the issue is debated at the local level, federal courts have weighed in.

The U.S. Fifth Circuit Court of Appeals on Friday upheld its Nov. 6 decision to temporarily stop the Biden administration’s vaccine mandate for companies with more than 100 employees.

In a 22-page ruling issued Friday, a three-judge panel held that challengers to the large company mandate are likely to successfully argue that the Biden Administration’s actions represent an unlawful overreach.

“Health agencies do not make housing policy, and occupational safety administrations do not make health policy. In seeking to do so here, OSHA runs afoul of the statute from which it draws its power and, likely, violates the constitutional structure that safeguards our collective liberty,” the ruling said.

The case is expected to end up in the U.S. Supreme Court.

Jamin Smith said his next move in Delaware is to organize some peaceful protests to bring their concerns right to the people in power.

Asked if he’s felt supported by his union, IBEW 1238, and his employer, Exelon/Delmarva Power, since coming out in opposition to the federal contractor mandate, Smith said, “one hundred percent.”