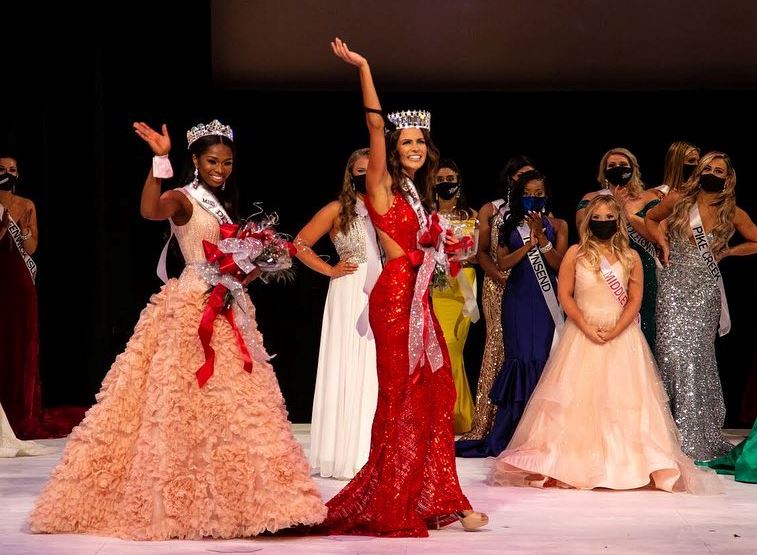 They were crowned in a fast-moving pageant finals at the Laird Performing Arts Center at Tatnall School. The show combined both contests into one event with activewear/swimsuit, gown and interview sections.

The young women dangled black masks from their arms like a trendy bracelet during most of the competitions. The contestants only wore the masks onstage at the end when they were all gathered together for the first time.

This year’s pageant took place 18 months after Miss Delaware USA 2020 Katie Guevarra and Miss Delaware Teen 2020 Samantha Repass won their crowns. Both of them talked during the pageant Sunday about how much of their work ended up taking place online because their reigns coincided with the COVID-19 pandemic.

Knox mentioned sexual assault during the interview portion of the night. All the contestants pulled two questions out of a fish bowl, and one of hers was about whether parents should police their children’s social media.

She said that social media can be a way that children are exposed to unsavory and upsetting things. She pointed out that she herself had been sexually assaulted by a teacher, and she supported parental rights to monitor social media and what their children were doing online as an effort to protect them.

A former Miss Delaware’s Outstanding Teen, Knox graduated with high honors from The Baldwin School, where she was head of the Black Student Union, Service League and Student Ambassadors Committee. She will be going to Cornell University, where she will focus on Africana studies, psychology and communications.

Knox holds 10 competitive gymnast state and regional titles in Delaware and Pennsylvania, is classically trained in violin, piano and vocals, and likes music so much, she’s composed pieces she plans to record in the summer and debut in fall. She founded a nonprofit, B.E.S.T., which stands for brave early screening teens, to encourage teens to be their physical and mental best.

She also is the teen program manager at the Teen Warehouse in Northeast Wilmington, where she offers a B.E.S.T program and others.

Her new bio says she hopes that by telling her story of overcoming adversity from sexual assault she will be a beacon of hope for her peers who have similar stories.

Sanclemente, the first medical student to participate in a Miss Delaware USA pageant, was asked how she would use the attention that being Miss Delaware would bring.

She said she plans to be a pediatrician and will use what she’s learned to encourage patients to achieve their goals. She also hopes it will help her raise money for her charity, H.O.P.E. Scholarship Foundation, that gives support and scholarships to women who are victims of sexual assault.

The new Miss Delaware USA is a second year medical student at Thomas Jefferson University’s Sidney Kimmel Medical College, where she also is a student admissions program director and president of the Med-Peds Society of Philadelphia.

She graduated from Appoquinimink High School before earning a degree in kinesiology and exercise science from the University of Delaware.

Sanclemente said in her pageant biography that she looks forward to “demonstrating to young women that you can wear a swimsuit and scrubs, you can wear a stethoscope and a crown, you can be a scientist, researcher and student doctor and become Miss Delaware USA.”

Kayla Kosmalski, Miss Middletown Teen, was a crowd favorite during the pageant finals. Kosmalski, who has Down Syndrome, was named Miss Congeniality and also won a one-year management contract with B2B Management.