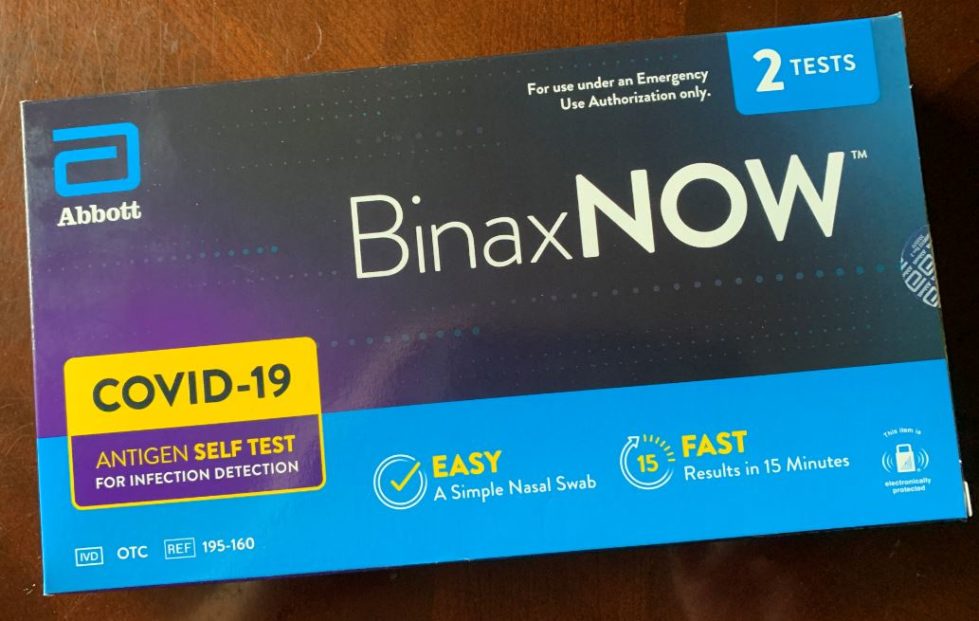 Abbott Laboratories’ home COVID-19 testing kit is among those available at area drug stores, when in stock.

People who have Highmark Blue Cross Blue Shield health insurance can pick up a COVID-19 test at any in-network pharmacy without having to pay for it, the company announced Monday.

Highmark is complying with an order by the Biden administration that insurance companies begin providing the tests for their clients at no costs.

Highmark clients can get up to eight over-the-counter tests per month, the company said.

The program is meant to be used by individuals who have been exposed to COVID-19 or are showing symptoms, said Bob Wanovich, vice president of Provider Strategy for Highmark.

The program is not meant to be used by people who need testing to return to school or to work, or to stockpile. Many schools and work places will not accept the over-the-counter tests, he pointed out.

The Highmark announcement comes as demand for testing reached record highs during December and January as the more infectious Omicron variety began making its way through the country. That has begun to wane a bit as the number of new cases drops.

Highmark customers should take tests to the pharmacy counter and show their Highmark insurance card in order to get the test for free, he said.

Customers who have a separate pharmacy benefit card should show that card and ask the pharmacy to process the purchase under it.

In addition, Highmark customers who use the company’s mail-order pharmacy, called Express Scripts, can order at-h0me tests through it.

Many boxes include two tests, Wanovich pointed out.

He also noted that clients can’t be guaranteed their pharmacies will have the tests. A pharmacy’s inventory will depend on deliveries from the companies making them, he said.

Customers should follow the directions on the box about how to use the test, Wanovich said. That will include advice on the best times to test after a possible exposure, he said.

Highmark, which has 6 million clients in Pennsylvania, Delaware, West Virginia and New York, already had been following federal guidelines to reimburse clients for the costs of COVID-19 tests that they had already bought.

Wanovich, who is a pharmacist, said the company had reimbursed about 1,000 customers already since that requirement began Jan. 15.

Highmark contracts with most national pharmacy chains and many local ones. Wanovich said customers needed to check with their state Highmark office and website if they needed information about which local pharmacies to use.

Wanovich also recommended that customers register to receive four free COVID-19 tests at home from the federal government by going to covidtests.com. The tests will be mailed by the U.S. Postal Service to those that register. They are limited to four per household.