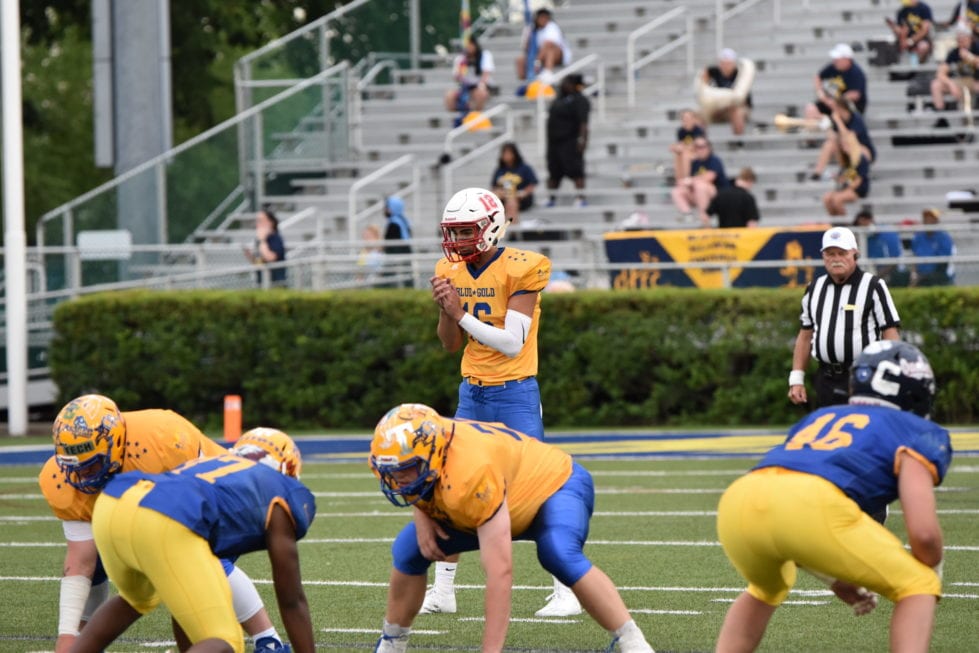 It was a beautiful night for football at Delaware Stadium Friday for the return of the DFRC Blue-Gold All-Star game after an absence due to the pandemic in 2020. 80 seniors from across the state would get together for one final game in Delaware and it would live up to the hype. A 4th down 17-yard touchdown pass from Gold Quarterback Aidan Sanchez to his Smyrna teammate Jeremiah Earl would prove to be the difference in the 21-13 win.

The Gold team controlled time of possession throughout the game but the Blue team would come up with some big stops deep in their own territory, including two 4th down stops from inside the two-yard line. The Gold would get on the board first in the opening quarter as Dover’s Qualeak Bumbry would punch it in from 1 yard out on 4th and goal (Vickers PAT). In the second quarter, the Blue team would answer. 2019 Delaware Player of the Year and Hodgson Quarterback CJ Henry would find the talented Wide Receiver from Howard Tyaire Spencer for a 27-yard touchdown down the right sideline (Spychalski PAT) to tie the game at 7. Another Blue team defensive stop on 4th and goal would keep the score 7-7 at the half.

It was all Gold in the second half as the scoring would begin with the Smyrna teammates. On 4th down the Sanchez to Earl 17-yard fade touchdown (Vickers PAT) would give the Gold team the lead back late in the third. The Gold team would also possess the next scoring play as Blue team quarterback Miles Harding rolled right and fired late across the middle and into the hands of Gold team DB Sean McGee. The Sussex Central Golden Knight would take it 16 yards into the endzone for a defensive score (Vickers PAT).

After trailing 21-7 the Blue team would try and find some rhythm late in the fourth. CJ Henry would find his longtime receiver at Hodgson Ny’Ghee Lolley for a 58 yard TD pass with 2 minutes to play, that might have been the best play of the night. Lolley took the jump ball away from the defender and broke a tackle as he walked into the endzone to cut the Gold lead 21-13 (PAT Failed). The ensuing onside kick would be unsuccessful for the Blue squad as Gold would recover and go on to win the game for the fourth straight year and for the 8th time in the last 10 years. The Blue team still leads the series 32-30 (3 ties).