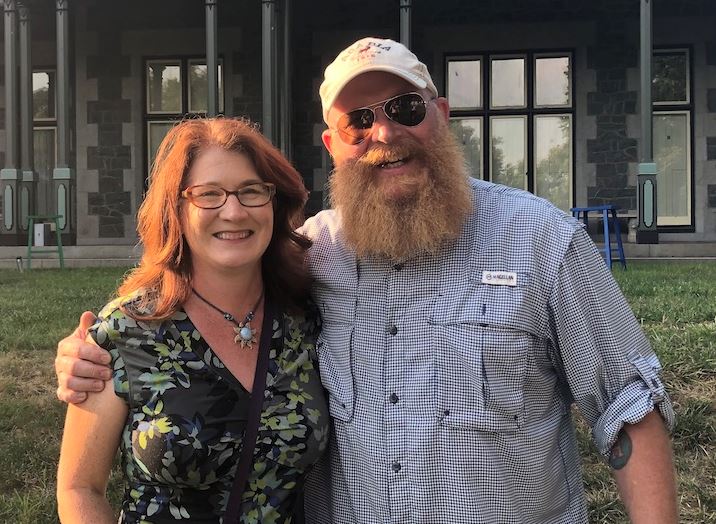 Katrina Baecht and Dustin Parks of Texas ended their quest to visit all 50 states before turning 50 by hitting Delaware over the weekend.

When Katrina Baecht and Dustin Parks decided they wanted to visit all 50 states before they turned 50, they decided Delaware would be last.

“I was like, well, Delaware was the first state in the Union, so let’s make it the last on our trip,” said Baecht.

The Austin, Texas, couple completed that bucket list over the weekend, seeing Delaware Shakespeare’s “Midsummer Mix Tape” at Rockwood Mansion as part of their visit.

Their quest started about about 13 years ago, when they were sitting around with her sister and the sister’s husband. The sister suggested they should all try to see all 50 states before they turned 50.

“This was alarming to be because I was the oldest,” Baecht said, “and had the fewest number of states visited on my list.”

But the idea grew on them.

“It’s one of the things where you kind of started talking about it casually, and then you’re like, ‘Are we really gonna do this? Yeah. Let’s go for it,” she said.

She and her husband got busy. Parks combined their lists and realized that they would have to revisit almost all the states because their lists didn’t match. Now, the only state they have not visited together is Florida, but they’ve both been to it.

As teachers, they needed to travel in summer. Some of their visits were via car trips to states they grouped together. Others, like trips to Hawaii and Alaska, requited more $$$$ and more planning.

The most horrifying visit came on a trip where they headed first to a campground in Devil’s Den State Park in Arkansas. The campground had a steam meandering nearby. They set up their site just as it started raining, so they decided to take a nap.

An hour and a half later, Baecht woke up wanting to go to the bathroom and realized it was still pouring. They both went to use the facilities in the rain and then decided to go check out the stream.

“It had turned into a raging river with giant logs floating down it,” Baecht said. “As we’re standing there, we watched it breach the campground.”

Everybody in the campground starting frantically tearing down their sites and throwing things in the cars trying to save stuff.

“Finally the water was about halfway up the wheel well and we just abandoned everything,” she said.

The campers all drove to the highest spot in the campground. It was surrounded by water and they were trapped there. After about an hour and a half, the water stopped about halfway up the hill and finally began receding.

They found their tent, but it had been destroyed. The couple drove to the nearest town and booked into a motel to dry everything out. When they got up the next morning, there was an inpromptu parade in the street to celebrate the U.S. Supreme Court’s decision on marriage equality, which had been announced the day before.

“So we got to see a parade,” Baecht said.

She said the couple spent a few days processing the experience.

Mostly, through, they found they fell in love with wherever they visited.

The best, Parks said, is that on the trips “my wife and I are at our very best for each other,” he said. “The whole overarching 50-by-50 is just an excuse to get us out of the state, and be together on the road.”

They both grew up in Texas, she from the north and he from the central part. They are aided in bridging their regional differences, he said, because she went to Texas A&M and his father did, too.

“I can speak her language,” he joked.

Parks said his favorite spot came in Custer State Park in South Dakota, on the edge of the Badlands and Mount Rushmore.

“We don’t like to do more touristy things, so we drove into the park and all of a sudden we’re surrounded by bison,” he said. “They’re just hanging out around the car. And because our electric car doesn’t make any noise when it’s sitting still, they’re coming right up to us and sticking their noses in the car and licking the windows. There’s nobody else but us in our car with these bison. It was so cool. We just felt like we were having a magical experience.”

Parks said the couple learns a lot about the state and about nature in particularly, but it’s been hard to retain it all.

They’ve made theater productions a part of their trips because his degree is in theater and he teaches it. The Delaware Shakespeare production wasn’t the only one they took in Saturday.

They also went to the Delaware Theater Co. and saw Tony Braithwaite’s afternoon performance of “Me, My Mic, and I.”  They loved both shows, and sitting outside, both at Rockwood and also at DTC, under trees in the parking lot.

“We couldn’t have asked for a better Delaware experience than what we’ve had today,” Parks said Saturday night after the DelShakes show. “We haven’t even been to bed yet. We woke up this morning in Boston, and we flew to Philly and came to Wilmington, and we had a day of it.”

“But a little pandemic came up and we had to put it off until this summer,” Baecht said.

And just in time.

She turns 50 in November.