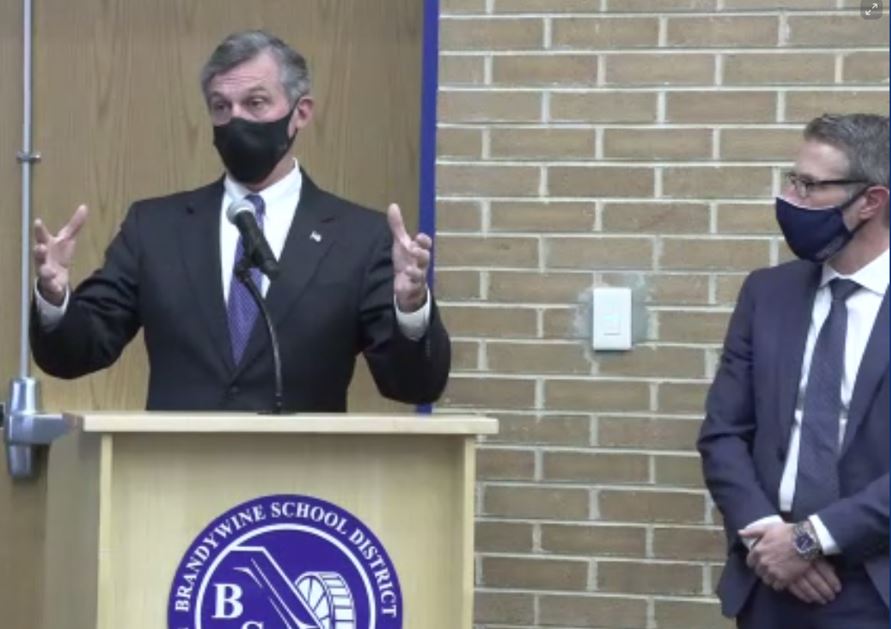 Gov. John Carney, left, and Dr. Mark Holodick, secretary of the Delaware Department of Education talk to the Brandywine School District board.

The Brandywine School District board voted unanimously Monday night to join the Wilmington Learning Collaborative, following the lead of the Christina district.

The Collaborative, a idea lobbied for by Gov. John Carney’s office and the Delaware Department of Education, will create a new board that would oversee city students from kindergarten through eighth grade in the two districts. Carney has pledged an additional $7 million in state money to go to the program.

The organizers are hoping that the Red Clay system board also will vote on Wednesday to join.

All three districts have students in the city, but those kids represent less than 15% of each district’s student bodies. That means that when districts enact mainstream policies, they often do not serve the needs of city students as well as those in the suburbs, Collaborative organizers say.

Among the issues that disproportionately affect city learners are poverty, crime, trauma, food insecurity, transiency as families move, and more teachers leaving city schools. The Collaborative will be charged with also reaching into the community to help solve problems there, too.

If approved, the Collaborative board will oversee a small staff and report to the three district boards, but is expected to be able to operate independently.

The idea, organizers say, is to take advantage of the knowledge and ideas of people who already are dealing with the city children to help them learn to the best of their abilities.

How the board overseeing the Collaborative will operate will be decided by the representatives each district sends to discussions that will hammer out a memorandum of understanding governing it. The memorandum must be brought back to each school board to approve before it goes into effect.

Organizers had hoped all three districts would approve joining the Collaborative in early January so a memorandum of understanding could be hammered out this spring and the board could go into effect by the start of the next school year.

But they got a lot of pushback about the fast pace. Now, they hope the memorandum will be hammered out and approved in time to use the next year for planning so the program can start with the 2023-24 school year.

In trying to sell the Collaborative, which is based on programs in other cities, Carney and the other organizers have had 150 meetings with teachers, board members and others. Carney has spent many weekends going through the city neighborhoods that are in the districts to spread the message and ask for support.

Carney, Delaware Secretary of Education Mark Holodick and Wilmington Mayor Mike Purzycki spoke to the board about the need for the program.

The governor said many people are worried that this is just another program that won’t work.

“That’s the question,” Carney said. “How do you get everybody moving in the same direction, and that’s really what we’re proposing to do through the Collaborative.”

Holodick pointed out that even in his 12 years as superintendent of the Brandywine District, several programs to help had been introduced, and just petered out.

He sees the Collaborative as a “second shot,” he said.

The problem with earlier programs, he said, was that all the programs were on top of what teachers and administrators already needed to do. It was a capacity issue, he said, with programs demanding too much of the people doing the work.

“Can we really expect the schools themselves to do all of this work and really change what’s happening?” he asked? “The short answer is no.

“And that’s the beauty of the Wilmington Learning Collaborative. It will engage community-based organizations, faith-based organizations. We need to launch summer programming bridge programs. When we do engage families in the community. we need to ensure that we have teacher agency and community agency in these schools by participating on councils where they actually have authority to make decisions.”

Purzycki told the Brandywine Board that he thought most of the city’s problems come back to education. It hurts that Wilmington has so many fine qualities, but is constantly cited as one of the country’s more violent cities, he said.

“The only thing that differentiates us from so many other cities is we have this bifurcated, fragmented education system that seems to divide our community or the way our kids live with one another day to day,” the mayor said.

Kids and parents don’t go to games or events together, and that starts in elementary school, he said.

The need for focusing on high school students rose again, and Carney agreed that those students also need to be focused on, too, but he wants to start with younger children who are learning the basics.

One board member suggested letting high school students attend whatever school they want and making sure they have transportation to that school.

Carney said that system essentially exists, and what he’d really like to see is students pick schools in the districts serving the city. Many high schools have capacity that’s not being used, he said.

No. 1 Buccaneers girls advance to championship game
Delaware tells vaccine providers to give booster doses to those eligible
Inside The Circle – Softball Week 6 Preview
Convoy taking wreaths to Arlington will stop in Delaware