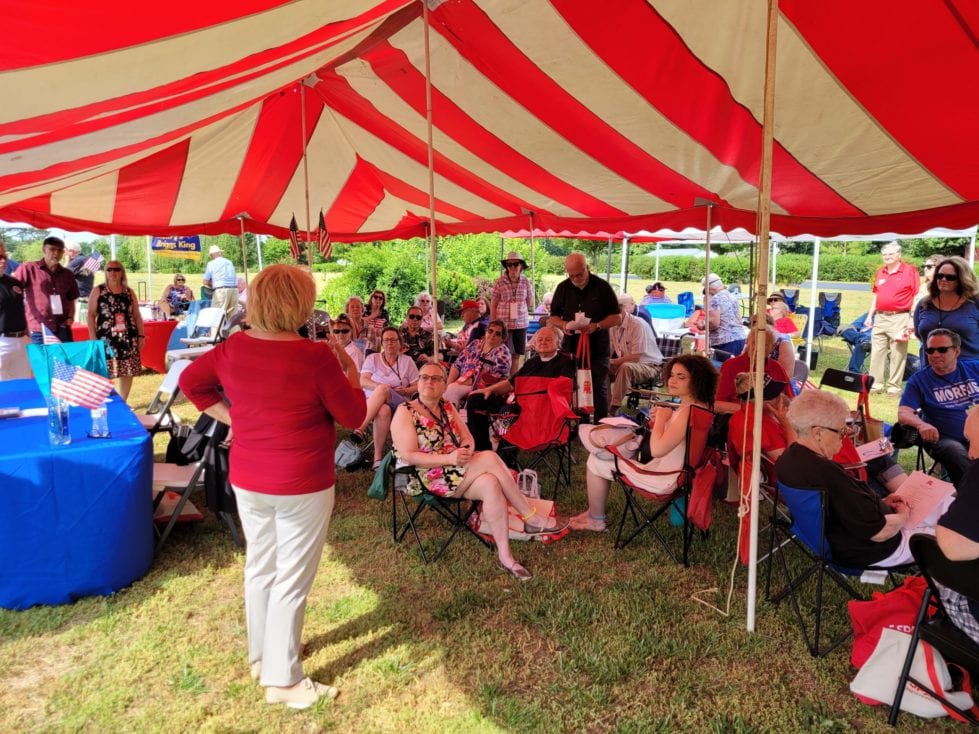 Jane Brady, back to camera, talks to Republicans Saturday at state convention. Photo by Ethan Lang

Jane Brady was re-elected as chair of the Delaware Republican Party Saturday, beating 2020 gubernatorial candidate Julianne Murray to hold on to her office.

The vote came during the party’s convention, which featured a spirited debate between Brady and Murray, as well as calls for unity among Delaware Republicans.

About 200 delegates and alternates met in Milford to vote on rules changes and officers to prepare for the upcoming midterm elections in 2022. Others were present on Zoom.

“There is a fervent debate of the ideas going on here, and I, for one, am for it,” said Albert Boyce, one of the delegates from Kent County. “There are a lot of new faces here.”

Brady prides herself on her communication and transparency.

“I’m working on informing the public on various issues,” said Brady. “Delawareans don’t support what they are doing, but they don’t know. They don’t know how they are using their tax dollars in Dover.”

Brady is ready for the midterm elections in 2022.

“Every incumbent is subject to redistricting, and we are encouraging candidates both old and new to run,” she said. “If districts come to Sussex and leave New Castle, that gives us an incredible opportunity.”

Brady hopes to expand the party and increase its reach.

“We need to reach into communities with personal and particular relationships,” said Brady. “I want to take the party and grow it. We need to look beyond our core and reach out to these people who feel alienated and left behind.”

About 200 Republicans gathered in person and on Zoom Saturday in Milford.

Murray said she had nothing against Brady, but felt like she could take the party to the next level.

Murray said that her campaign gave her a lot of traction and helped her make political inroads with voters who are disgruntled.

“I have many people behind me that I can bring to the party,” she said. “I’m hard to ignore, and I can bring in grassroots involvement.”

The shift to the left by Democrats has created a vacuum, Murray said.

“There’s a large class of voters that don’t feel at home,” she said. “Democrats, a lot of them have been left behind.”

Murray wants to include these voters under the Republican tent.

“If they don’t want to register as Republican, at least consider our Republican candidates,” she said.

She believes the party needs to be more visible: “We need to go on the offense.”

“We’re not the party of just old, white men,” said Murray. “We need to show that the party has room for a broad amount of people, and we need to make sure more people feel included.”

Speaker Chris Kenny, chairman of A Better Delaware, talked about addressing economic opportunity and creating a higher quality of life for families in the state. Kenny also is the owner of DelawareLive.

He stressed unity in the party.

“We need to dispel this talk of RINOs in the party,” he said. “You need to have room for a diverse set of ideas and beliefs to grow the party and be successful.”

Keynote speaker Paris Dennard is a national spokesperson and director of Black Media Affairs with the Republican National Convention.

He’s been active with the Republican Party since he was 17 in Phoenix, Arizona, and worked with the Bush White House for four years and later returned to the RNC.

He said it’s essential to be involved at the local level and tailor messages to specific states.

“In my position, I want to take our message into as many households as possible,” Dennard said. “I want to increase our outreach, especially in markets we don’t usually reach.”

Efforts like that helped former president Donald Trump more than double his percentages with black women and got 26% of the black male vote, Dennard said.

“Our methods of engagement with the black community are making inroads, and we are going to continue,” he said.