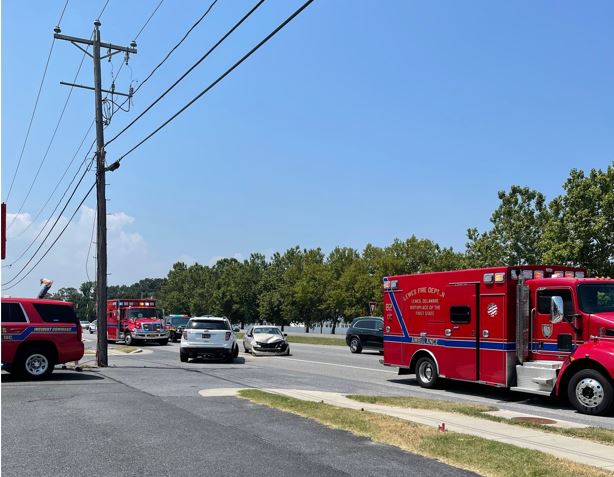 Dr. Beth Duncan says there are increasing numbers of accidents in front of her Lewes office.

Delaware’s beaches have seen traffic return to pre-pandemic levels — and then some, according to people driving the roads.

With the resurgence of tourism and rapid development of the coastal region, some locals say the summer of 2021 traffic has become worse than ever.

Tourism is the fourth largest industry in Delaware, having attracted over 9.2 million visitors in the year of 2018 alone.

That all changed when the pandemic forced restaurants, hotels and attractions to close; a blow to the industry that serves as the lifeblood of the coastal region.

With all the harm caused by the pandemic, some Sussex County residents were able to appreciate that for the first time accessing local amenities with ease during the summer, knowing that the traffic would return.

Rehoboth Beach, for example, already has virtually matched its 2019 parking meter revenue, according to a city spokeswoman. That’s significant, considering the beach town has begun offering “meterless Mondays,” which allow visitors to park free of charge on city streets. She declined to say what that total is.

Repeated efforts were unsuccessful to get comments from the Delaware Department of Transportation about the traffic, or the number of vehicles passing through Route 1 toll booths this summer, compared to 2020 and 2019. DelDOT also has not yet responded to a recently filed Freedom of Information request about that.

However, people who frequently drive to the beaches say there’s no doubt traffic is heavier.

Garchinsky travels from Wilmington to Dewey Beach frequently for his gigs, and has become all-too-familiar with the problem of traffic in the beach region.

“Compared to recent years, I’d definitely say that there’s more traffic volume, for sure,” Garchinsky said. “Especially along Coastal Highway once you get from Lewes to down south of Dewey.”

He said he faces the most congestion during the weekends, but traffic has become worse during weekdays as well.

Garchinsky credits the resurgence in tourism to post-COVID fatigue.

“After having a year of not being able to do what they want freely, people are taking the opportunity this summer to enjoy the beaches and the towns and the nightlife,” he said.

Traffic isn’t limited to the roadways, according to Garchinsky.

“The nightclubs and everything are busier, and also, people seem to be having a lot more fun than in the past.”

It’s not all fun and games, if you ask Dr. Beth Duncan, owner of Delaware Otolaryngology Consultants in Lewes.

She commutes from Wilmington about three days per week.

“It’s a nightmare everywhere,” Duncan said. “People just are driving faster and faster and I think right now with the fallout from the virus and the lockdowns, the accidents are just incredible, and they’re everywhere.”

Duncan believes traffic is worse now than before the pandemic. She credits the increase to the rapid development of the coastal region.

“A lot of people retire here or just move here from high-tax states like New York, New Jersey, Maryland and Virginia,” Duncan said. “They’ve been vacationing here for however many years and they think, ‘Wow, this is such a beautiful place. I’m going to retire here.’”

Duncan believes that development near the beach area has come without sufficient planning, congesting roads and leading to a higher risk of car accidents.

Duncan also has noticed an increase in aggressive driving.

“Summertime is when you realize how bad it is,” Duncan said. “But people are also becoming more aggressive and angry and frustrated on the roads. We’ve had some spectacular crashes at the entrance to my parking lot, and it’s getting worse all the time.”

Carla Briccotto of Middletown travels to the beach area nearly every weekend during the summer.

“It is absolutely the worst that we have ever seen,” Briccotto said. “We’ve been traveling down for 11 years, every week, and it’s amazing this year, the amount of traffic that we are encountering.”

Briccotto attributes that to numerous factors, including an influx of new residents, as well as tourists visiting after having to cancel their vacation plans during the pandemic.

“It is wonderful for the beach towns.” Briccotto said. “It’s amazing for that and for getting people back to work, but getting there — that’s the trick. The time of day is absolutely critical.”

Briccotto tries to leave Middletown for the beaches by 8 a.m. in order to avoid getting caught in traffic jams.

She believes it will become critical for the state to begin investing heavily in infrastructure improvements.

“We’re just not keeping up with the influx of new residents. The roads just weren’t originally designed for the volume that they’re handling right now,” Briccotto said.

Despite the traffic, Briccotto said she understands why people would want to move to Delaware.

“We just have so much to offer between the beaches, all the way up north to Wilmington, and in the city, of course,” Briccotto said. “It’s wonderful to have the development but perhaps we should try to slow that down, or implement a moratorium for however many years until we can catch up.”

In the meantime, Briccotto said, drivers and visitors need to try to exercise patience.

“The important thing is when you get into Sussex County, you have to respect that the restaurants may have a wait and that the traffic will be there and you won’t always be able to get around it,” Briccotto said.

“You just have to relax and have patience and focus on the end result: getting your feet in the sand.”