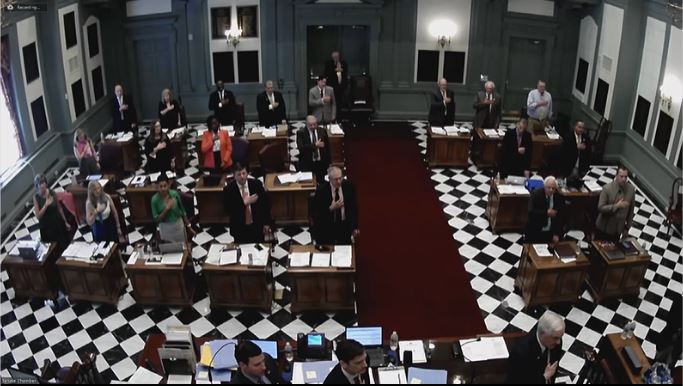 The Delaware Senate says the Pledge of Allegiance at the start of one of its meetings.

A women’s group has called on the Senate Ethics Committee to conduct a formal inquiry into the arrest of State Sen. Darius Brown, D-Wilmington.

That committee rarely meets and requires a fellow senator to ask for an investigation because of legislative misconduct.

In May, Brown was arrested and charged with two misdemeanor counts of domestic assault after a woman was punched at Taverna Rustic Italian Restaurant in Talleyville. Police reports later said the incident occurred during an argument about a social media post.

Brown was accused of throwing a glass of water at the woman before he left the restaurant.

The Women’s Defense Coalition of Delaware, which describes itself as a statewide non-partisan movement,  issued a press release Thursday saying it had emailed Delaware legislators in May about Brown. That letter expressed concern about Brown remaining in office and in particular chairing the Judiciary Committee, which votes on issues regarding women’s safety.

Brown later was removed from his chairmanship, but State Sen. Dave Sokola, D-Newark, said the Senate would wait and see how the case turned out before focusing on Brown’s seat.

“Accusations of domestic violence are serious and in direct conflict with the values of the Delaware Senate Democratic Caucus,” Sokola said in a statement then. “ However, a presumption of innocence is one of the most sacred principles in the American criminal justice system.”

“We understand Sen. Sokola’s response and respect the presumptions of innocence until proven guilty,” the Women’s Defense Coalition of Delaware said in its press release. The coalition describes itself as “a non-partisan movement of women across Delaware providing training, education, resources, and advocacy for a woman’s ability to defend herself so that she may live with less fear and more freedom.”

“However, our deep respect for the foundation of our justice system does not prevent WDC and its members from requesting our Senate to conduct an Ethics Committee review of Sen. Brown’s past and current unlawful and dangerous behaviors.”

Efforts were unsuccessful Thursday to reach members of the Delaware Democratic Caucus for comment about an ethics committee investigation.

In order for the Senate Rules & Ethics Committee to conduct an inquiry into Brown’s alleged actions, a fellow senator would have to file a complaint against him alleging some kind of legislative misconduct.

Senators are subject to sanction if they are suspected of engaging in conduct that brings the Senate into disrepute or reflects adversely on the member’s fitness to hold legislative office, or engaging in any disorderly behavior occurring after the member is elected to the Senate.

Members of both parties have said such action should occur only after Brown’s criminal charges are adjudicated.

“Should Sen. Brown be found guilty of the charges brought before him, or should irrefutable and incriminating evidence be made public, he should absolutely resign or be removed from his position as a Senator,” said a statement from Senate Republican Leadership Thursday.

Senate Minority Leader Gerald Hocker, R-Ocean View, and Minority Whip Brian Pettyjohn, R-Georgetown, said in a joint statement on Facebook following Brown’s arrest that they “are aware of and deeply concerned by the accusations of domestic abuse made against Brown” and “such alleged actions do not represent the values of our caucus or the General Assembly.”

They said then they would withhold comment until more information became available.

Former Rep. John Atkins, a Republican in the House of Representatives from 2003 until 2007, faced an ethics investigation after being arrested for drunk driving, displaying his legislative identification card, then going home where he was arrested for a second time after allegedly assaulting his wife.

The House Ethics Committee found sufficient evidence to begin expulsion hearings, and Atkins resigned. Then he switched parties and defeated his successor in 2008, serving as a Democrat in the House of Representatives until 2013.

Former Rep. Brad Bennett, a Democrat, was arrested for driving under the influence in 2012, but the House Ethics Committee dropped its investigation after Bennett resigned.

Bennett’s wife, current Rep. Andrea Bennett, D-Dover, was arrested in December of 2020 and charged with third-degree assault after a domestic dispute, but the House Ethics Committee took no action and the charges were eventually dropped at the victim’s request.