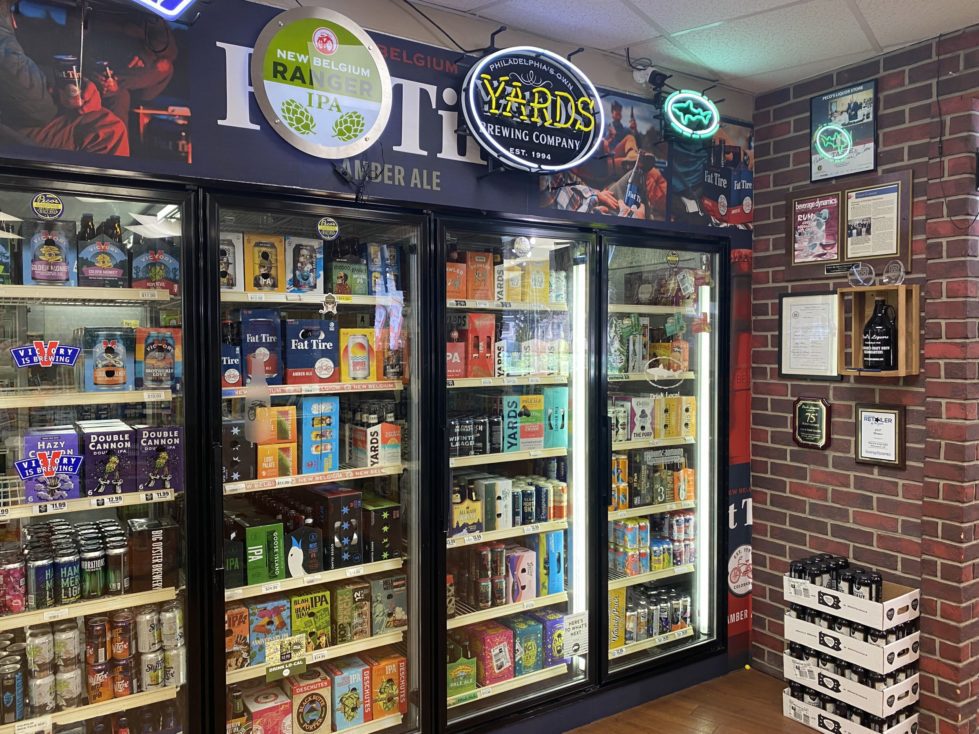 Twenty years ago, if you were drinking a beer in Delaware, it was likely one of the classics: Budweiser, Miller or Coors.

That’s not necessarily the case anymore.

Today, it’s likely to be a local craft beer from one of Delaware’s 32 breweries, and that craft brew is likely to have been picked up not at the brewery, but at a local liquor store.

Liquor stores have capitalized on the craft beer craze — not only because that’s what so many customers want, but also because local liquor stores want to support local breweries.

“In our industry, that’s the hot new thing,” says Jeff Kreston of Kreston Wine & Spirits in Middletown. “The biggest upside to craft beer is the local aspect.”

Kreston said that local beers are among the best sellers in his store. Aside from being in high demand, Kreston said he likes to offer his customers local brands because he wants to support Delaware’s small businesses.

“We’re a family-run business like most of the craft breweries in the state,” Kreston said. “So why wouldn’t we give them support and love? We want to see them succeed just as much as we want to see ourselves succeed.”

Kreston said some of his team members even visit state breweries to check out their newest offerings.

“First State Brewing Co. in Middletown, for example. I have a guy who will go there to grab a drink and a sandwich just to keep an eye on them, and then when they have something new go to distribution, we’re already familiar with it and we’re ready to rock and roll.”

With so many local offerings available, customers are always coming in looking for new beers to try, said Jason Lydon, ambassador of good beer at State Line Liquors in Elkton, Maryland — just west of the Delaware state line.

“People come in all the time asking, ‘What’s the best?’ but there’s no such thing,” Lydon said. “We’ll often tell people if there was a best we wouldn’t have all these other beers.”

With over 3,000 beers in its inventory, State Line Liquors has something for everybody.

“We love to support local,” Lydon said. “It’s awesome when you can support local and it’s also delicious beer.”

Throughout the past 20 years, many beer enthusiasts have become brewers. Inevitably, the quality of beer offerings have improved as more options have become available.

“Right now, there’s so much good beer that it’s ridiculous. The bar has really been raised on what constitutes good beer,” Lydon said.

Macro-beers — the ones that come from the nation’s largest breweries — are consistent wherever you go.

“Beer has become ultra-local,” Lydon said. “You can go anywhere and get really good beer.”

Mulvihill finds new craft beer offerings by word of mouth, through social media, from their wholesalers and even from their customers.

“I can’t tell you how many times a customer comes in and says ‘Hey, I was on vacation and I had this beer and it was really great,’ so we keep our ears open for stuff like that,” Mulvihill said.

Peco’s Liquor Store has the advantage of one of their managers, Damien Grant, being a cicerone — the beer equivalent of a wine sommelier.

When a customer comes in looking for a new beer to try, the staff at Peco’s usually asks, “What do you normally drink?” according to Mulvihill.

“From there we can make suggestions based on what we can discern from their palate and their previous choices.”

There are now more than 8,000 craft breweries in the United States, with 32 of them being in Delaware.

While that might not seem like a lot, that’s 4.2 breweries for every 100,000 Delawareans 21 years of age or older. According to the Brewers Association, Delaware is ranked 21st in terms of craft breweries per capita.

Craft breweries contributed $430 million to Delaware’s economy in 2019, the seventh highest contribution of any state when considered as a proportion of the population.

The state produced 299,299 barrels of craft beer in 2020, or 12.6 gallons of craft beer for every Delawarean of legal drinking age. By that metric, Delaware ranks second in the nation.

Boozy sodas, seltzers, teas and coffees continue to disrupt the market, but craft breweries often get in on those fads too.

Multiple liquor store operators said the biggest trend as of late has been canned ready-to-drink cocktails.

NielsenIQ credits some of the increase in canned cocktail sales to Covid-related bar and restaurant closures.

Some effects of the pandemic are just beginning to manifest themselves.

“Other challenges that weren’t apparent right in the beginning of the pandemic but are now are just product availability,” Mulvihill said. “Some companies are struggling to get raw materials like glass and aluminum, so we’re seeing some brands that are just unavailable right now, or sporadically available.

“There’s bottle shortages, there’s can shortages,” Kreston explained. “MillerCoors just announced that they’re discontinuing 30-some different brands, just because they don’t have the materials to make them anymore.”

The beer, wine and liquor store industry, like many others, was forced to adapt their practices during the pandemic, but unlike other industries, demand for their products increased.

According to NielsenIQ, total alcohol sales outside of bars and restaurants increased by around 24% during the pandemic and sales of spirits with higher alcohol content rose even faster, more than 27% over last year.

“We have a little bit of survivor’s guilt in the off-premise liquor industry,” Mulvihill said. “We were largely unaffected sales-wise.”

At the height of the pandemic, 70% of Peco’s Liquor Store’s sales were conducted via curbside pickup.

With all the changes in consumer trends and business practices, one thing is clear, even if it’s not bottled, liquor store owners say: the small state of Delaware is by no means a small player in the craft beer industry.

“We try to highlight that as much as we can by including those local breweries,” Lydon said. “But at the end of the day, good beer sells itself.”