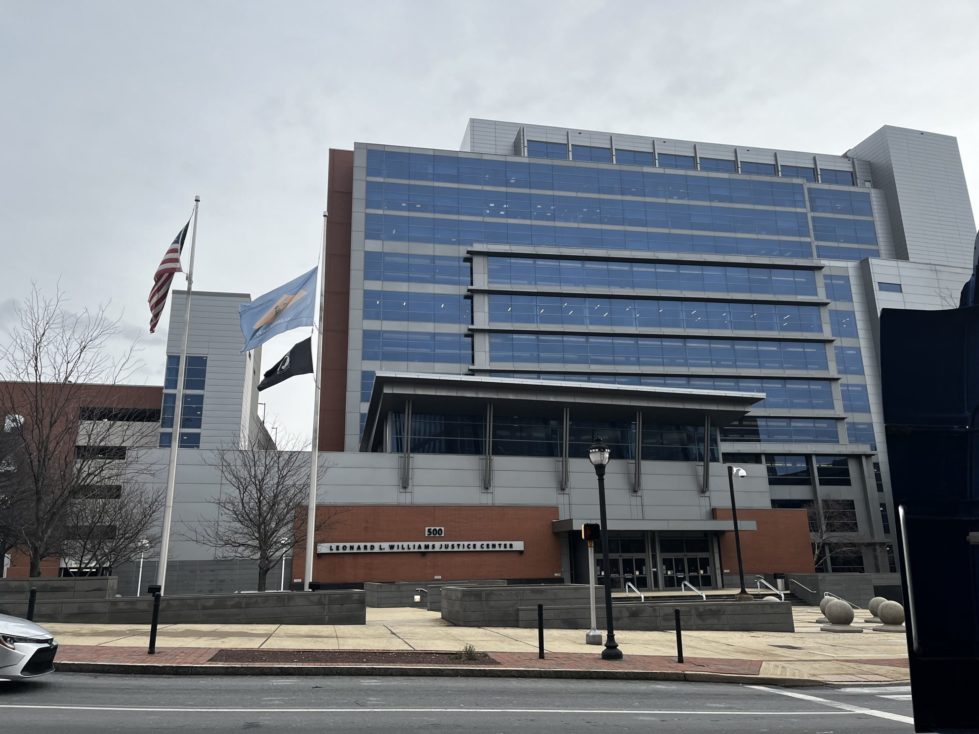 The trial of State Sen. Darius Brown is taking place at the t the Leonard L. Williams Justice Center in Wilmington.

The woman that State Sen. Darius Brown is accused of assaulting testified Wednesday that he hit her and threw a glass of water at her after seeing a photo of her and another man on Facebook.

The victim testified at the Leonard L. Williams Justice Center in Wilmington that she and Brown have known each other for about 10 years and have been “off again on again” dating throughout that time.

After arguing about the photo, she said, Brown told her he was leaving the restaurant they were in. She said she was staying.

The victim testified Brown walked over to her, said something like “You think this is a game?” and then hit the side of her head and threw a drink at her. He left.

Brown is facing charges of offensive touching and disorderly conduct. Chief Judge Carl C. Danberg is presiding over the trial in the Court of Common Pleas.

The charges stem from a May 2021 altercation at Taverna Rustic Italian Restaurant in Wilmington.

In the prosecution’s opening statement, Deputy Attorney General Joe Grubb said the jury would hear evidence establishing that Brown punched the victim in the head, picked up a drink and “launched it at her.”

Grubb said Brown became jealous when he saw the  photo on the victim’s phone.

The prosecutor told the jury that they would hear the testimony of a bartender, a waiter and a patron of the restaurant. None of them actually saw the punch being thrown, he said.

All of them saw the result, he said: The emotional victim sitting in the booth, drenched in water, shards of glass in her hair, as Brown left the restaurant.

Grubb also said the state also would show video surveillance from the restaurant. Again, he told the jury, the video would not show the actual punch or the water being thrown.

Instead, the video will show Brown getting out of his seat, doing something near the victim, then leaving the restaurant.

“Something happened,” Grubb said, that made all three witnesses turn around and look.

The day after the altercation, the victim received 12 white roses with a note that said, “I love you fifty eleven times,” Grubb said.

The note was not signed, but Grubb said the phrase “fifty eleven” was an inside phrase used by Brown and the victim.

Grubb pointed out that the state does not need to prove that the victim was injured. In fact, fortunately, the victim was not seriously injured during the altercation and nobody required medical attention.

The state must prove, Grubb acknowledged, that Brown intentionally made contact with the victim with a part of his body — his fist — knowing that his actions would cause offense or alarm.

On the second charge — disorderly conduct — the state must establish that Brown caused some kind of public annoyance, defined as an offensive gesture, noise or display.

Brown’s defense attorney, William Rhodunda of Rhodunda, Williams & Kondraschow, said during his opening statement that “there are always two sides to the story.”

He reminded the jury that Brown is presumed innocent and that the state holds the burden of proof. It’s a standard the state won’t meet, Rhodunda said.

He reminded the jury that the state conceded that none of its witnesses actually saw the punch or the glass being thrown and that whatever happened was out of view of the restaurant surveillance camera.

Those factors, he said, cast doubt upon the charges.

Rhodunda asked the jury to consider the evidence carefully, noting that “criminal charges can have negative consequences to people.”

He said that later the defense will prove that it was “physically impossible” for Brown to do what he is accused of doing.

The victim testified that on May 16 she went to church in the morning and then received a phone call from Brown.

Brown asked her to come speak with a young couple at his church about relationships and mental health, she testified. She did, and afterward, Brown and the victim went to Taverna Rustic Italian Restaurant.

They dined and talked for about three hours, she said, and she was enjoying herself.

But near the end of their visit, she was on Facebook when the photo she was tagged in with another man came across her screen. Brown saw the photo and became upset.

The victim said she discussed it with him for a short period of time but then said, “I’m not going to argue about social media.”

The incident then occurred.

She said she was in a state of disbelief, and felt ashamed and embarrassed. She testified she was thinking to herself, “What just happened?”

Other customers in the restaurant came to console her, she said. She remembers hearing people say “be still,” “it’s OK” and “not all guys act like this.”

At that point, the prosecution attempted to play the video surveillance from the restaurant, but the file was the wrong type and could not be played on the computer.

The court recessed for lunch and resumed at 1:45 p.m.