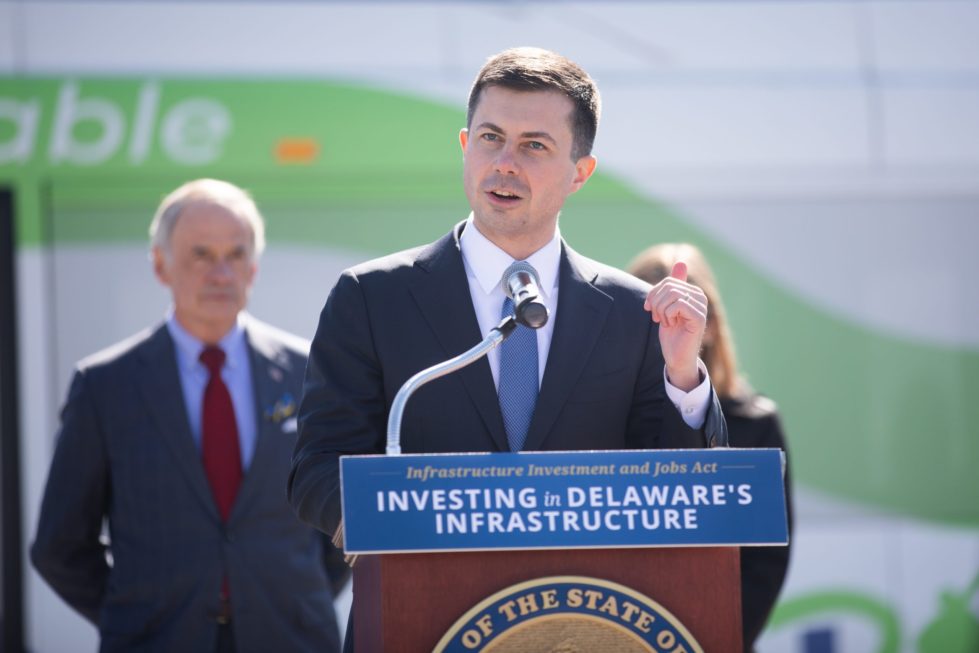 Buttigieg said that because of that law, more Americans will have clean and high-quality transit options. He emphasized the importance of helping workers gain the skills they need to repair, maintain and operate electric buses.

“It is a very good thing that millions of people ride the bus every week, to get to work, to get to school, to get across town, to get where they need to be. The more people that are on buses, the less congestion, the less pollution on our roads,” Buttigieg said.

“But we also know that far too many buses — the majority in our country — are outdated. They have diesel engines, they contribute to emissions and pollution, and we have a chance to do something about it.”

Next week, Buttigieg said, the Biden Administration will announce an unprecedented funding opportunity to modernize bus fleets and bus facilities across the country, “and create good jobs in the process.”

They’ll do it through a low-and-no emissions grant program that will help transit agencies get clean, primarily electric-powered buses.

The transportation secretary said shifting transit vehicles to electric is necessary to confront the threat of climate change, particularly in Delaware, the lowest-lying state in the nation.

“We always talk about climate in terms of the consequences if we fail — and rightly so because they’re dire — but this is also a good time and place to talk about what we stand to gain by getting it right.”

He said political leaders must work to break the false narrative that there is a choice between climate and jobs.

“We’re here to talk about climate jobs,” he said. “And often those so-called green-collar jobs are also blue-collar jobs. It’s the people who will be operating and servicing and manufacturing buses like those you see here today.”

To receive grants under the zero-emission bus program, transit agencies will be required to put forward a plan showing how they are going to support, train and retain their employees.

Buttigieg said that with very few exceptions, agencies will be required to use 5% of their grant funding toward workforce development efforts.

“So it’s not just that we’re saying it’s a good thing to do. We’re putting dollars behind it — funding, specifically, for the first time, to make sure that skilled operators and mechanics working today on diesel buses are prepared to be the electric transit workforce of tomorrow.”

Making the switch to electric won’t only be good for the people who ride buses, the secretary said.

It will also be good for the child living in the apartment unit with a window air conditioner, he said, pointing to a building in the distance, because the child won’t have to breathe in the toxic fumes coming out of diesel buses.

Delaware Transit Corp., which operates Delaware’s DART buses, currently has 26 electric buses in its fleet — about 10% of their current fixed-route fleet.

Those buses were purchased with grants from the Federal Transit Authority. In total, the transportation organization has received $9.1 million in grants from the federal government to purchase alternative-fuel buses.

The department will have the opportunity to apply for more grants under the Biden Administration’s program which is expected to be announced next week.

The event happened just one day after Gov. John Carney announced that Delaware will join 13 other states in adopting California’s zero-emission vehicle regulations, a move that he said will provide drivers looking to purchase an electric vehicle with more choices at Delaware dealerships.

“In 2017, we signed on to the U.S. Climate Alliance, committing to reduce our carbon emissions by at least 26 percent by 2025,” Carney said in a press release. “Adopting zero-emission vehicle regulations will help us make progress on those goals, as well as the other goals outlined in Delaware’s Climate Action Plan.”

The program will impose regulations mandating that a certain percentage of the vehicles delivered for sale in a state are zero-emission vehicles.

Manufacturers will receive credits for each delivered vehicle based on the type of vehicle, range and other factors.

Each year, manufacturers must meet a zero-emission vehicle credit amount based on average annual sales. In states already participating in the program, the automobile industry has successfully met the required percentage.

DNREC also offers a Clean Vehicle Rebate Program that gives rebates of up to $2,500 within 90 days of a vehicle purchase or lease before June 30, 2022.

In November, DNREC also announced a $1.4 million grant program to expand Delaware’s electric charging network. Funding will be targeted to increase the availability of electric vehicle infrastructure in areas where access to fast-charging stations is limited.

Implementation of the zero-emission vehicle regulations would not take place until model year 2027 (2026) to provide manufacturers time to adjust their inventories and prepare dealerships.

There are currently at least 45 zero-emission vehicle models available to customers in the United States and over 1.5 million have been sold nationwide.