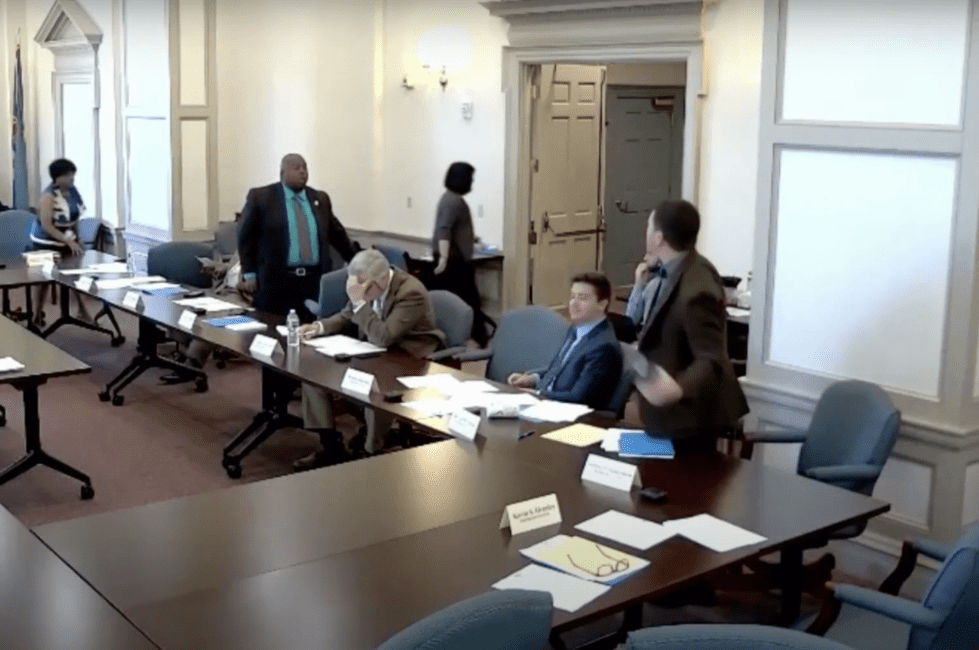 Two Republican lawmakers stormed out of a House committee hearing Wednesday after being asked to limit their questions and public comments were restricted to one minute each.

The committee met to discuss five bills with just an hour allotted for the meeting before lawmakers were due on the House floor for a short session.

Two of those bills – Senate Bill 90 and House Bill 252 – elicited extensive comments and questions from lawmakers.

Senate Bill 90 is a controversial bill that would require landlords to accept tenant applications from Housing Choice Voucher – or Section 8 – recipients.

After a public commenter was cut off before finishing his testimony on HB 252, Mike Ramone, R-Pike Creek, shouted, “This is a farce,” collected his belongings and exited the room.

Thirty minutes later, during discussion on SB 90, Rep. Jeff Spiegelman, R-Clayton, loudly slammed his hand down on the table, yelling, “This is a farce of a committee meeting. I am not going to participate in this committee process. This is absolutely not a public committee.”

Lawmakers were due on the House floor at 2 p.m. for a short session to vote on one resolution to recognize May 22, 2022 as “World Preeclampsia Day,” which raises awareness for pregnancy complications characterized by high blood pressure.

Housing Committee chair Rep. Kendra Johnson, D-Bear, said at the beginning of the hearing that public comments would be limited to one minute each in order to accommodate the committee’s packed agenda.

After Ramone asked a series of questions on HB 252, Johnson asked him to stop and allow other lawmakers to ask questions.

“I don’t want to be rude,” Ramone responded. “But we have five bills here today and we have to go on the floor at 2, and you’re not letting us discuss bills as we are supposed to be doing as legislators before we drop something on our constituents and we don’t know the answers.”

After a representative from the Department of Finance was cut off in the middle of his testimony, Ramone left the meeting in protest.

The commenter was later allowed to return and conclude his remarks.

After asking a number of questions, Johnson cut Spiegelman off.

“Rep. Spiegelman, can you ask one more question? There are two other committee members who would like to ask questions,” Johnson said.

“Madam chair,” Spiegelman responded. “I will ask as many questions as I feel are necessary for this bill.”

“Excuse me, we will not disrespect the chair,” Bolden said.

Spiegelman reiterated that he would ask as many questions as he feels are necessary.

“And we will go on to the next person,” Bolden said. “You’re not going to sit here and be rude to her.”

Spiegelman continued his line of questions.

When he was interrupted again, he slammed his hands down on the table, knocking over a water bottle and shocking many of the attendees.

As he was leaving the room, Spiegelman shouted, “This is absolutely not a public committee.”

“Well good,” Bolden said. “Then get off the committee.”

After the meeting, Spiegelman told Delaware LIVE News that not having the time to publicly vet the bill was “extremely frustrating.”

“The committee system serves as an extremely important gatekeeper role for making sure that bills are ready for primetime – they’re ready for the House floor,” Spiegelman said. “And so the back and forth between members of the committee, the bill sponsor, etcetera, is oftentimes much more beneficial to the public good.”

He said committee leaders should have considered whether putting five bills on the agenda – two of them controversial bills – was an effective strategy, knowing the meeting could only last one hour.

Spiegelman said he understands Johnson was in a tough spot and acknowledged that as the legislative session draws to a close, committees will have to handle more and more bills on tight deadlines.

“I understand where she was coming from,” Spiegelman said. “But to give an hour for five bills, two of which are of real substance – it just isn’t enough time.”

Asked whether he regrets slamming his hands down on the table, Spiegelman said, “No comment.”

Senate Bill 90 was tabled, creating the potential for an even more packed agenda during the committee’s next hearing.