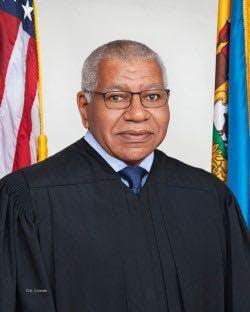 The chief judge of the Delaware Court of Common Pleas will retire in May, the courts announced Tuesday afternoon.

History-making Judge Alex J. Smalls has told Gov. John Carney he will step down effective May 1, 2021.

In 1997, Smalls became the first African American to serve as a chief or president judge in a Delaware state court.

“I am honored and humbled to have been given the opportunity to serve the citizens of Delaware as a  judge for 29 years,” Smalls said in his resignation letter, quoted in a press release from the courts. “My  tenure on the Court has been enriched by the staff and Judges with whom I was fortunate to serve.”

Smalls said he felt it was time for a change.

He was appointed or reappointed by four different governors and has served under  five different Delaware Supreme Court chief justices and is the longest-serving chief judge of any Delaware State Court. He has not announced any specific plans after he retires.

Delaware Supreme Court Chief Justice Collins J. Seitz Jr. said Smalls has had a remarkable career and thanked him for his service.

“He has led one of the state’s busiest courts with great distinction,” Seitz said in a press release. “Litigants and attorneys who appeared before him, and his judicial colleagues, know the chief judge  as a humble, caring and compassionate man.”

He also oversaw and implemented numerous innovations including the creation of drug diversion programs and specialty courts such as the DUI Court. Most recently, he was instrumental in the creation and launch of the Wilmington Community Court program.

Smalls graduated from Morgan State University in Baltimore with a bachelor’s degree in political science and went on to earn his law degree from Rutgers University School of Law.

He began his  public sector career in March 1980 as a deputy attorney general for Delaware in the criminal division, and later joined the City of Wilmington as commissioner of Licenses and  Inspections in 1985. He then became the city’s director of Public Safety from 1985 until joining the  bench in 1991.

Munch your way through day at these new beach restaurants
Bardea owners to open Market Street steakhouse in ’22
UD drumline to escort Biden in D.C. inauguration
Mitch's Mo' Better Chicken: Frying is in this family's DNA