Circus Hollywood is one of the features of the Delaware State Fair, which starts this week.

More than 2,000 pounds of butter that will become art, a Wild West show and a BMX stunt show are some of this year’s additions to the Delaware State Fair.

The 103rd edition of the fair runs July 21-30 at the state fairgrounds in Harrington.

The entertainment lineup goes from A (Adkins, Trace, with the James Barker Band on July 25) to Z (ZZ Top, with Goodbye June on July 27).

Plenty of seats are available for all shows, Aguilar said, noting that tickets are selling best for Sam Hunt (with Roman Alexander on July 21), Nelly (with Justin Champagne on July 23) and Hank Williams Jr. (with Jake Worthington on July 30).

Fairgoers can watch the progress of the butter sculptors every day. They’re creating something that fits this year’s theme of “Summer Nights & Carnival Lights.” Their work is with recycled butter. 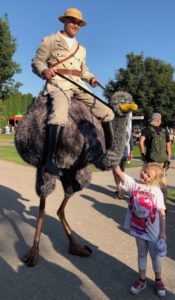 “Tumbleweed Crossing” is the name of the Wild West show, which features family-friendly comedy, stunts and special effects. Showtimes are at 1:30, 4 and 7 p.m. daily.

Robert Castillo’s BMX Freestyle Team is making its fair debut, with shows daily at 1, 4 and 7:30 p.m.

The fair is built to celebrate the state’s agriculture and agricultural heritage, so most of the competitive exhibits are food- and farm-related.

There will also be plenty of livestock: beef cattle, dairy cattle, goats, horses, ponies, rabbits, sheep and swine. But to curb the spread of avian influenza, all live poultry competitions and exhibits have been cancelled.

One new feathered friend will be roaming the grounds, though: Oscar the Awesome Ostrich, along with his person, Safari Sam.

There will be no COVID-19 rules, Aguilar said, noting that fairgoers can choose to wear masks. The pods used last year are gone, so the grandstand will be at full capacity.

The Delaware State Fair was one of the few state fair that opened during the pandemic, partly because the Delaware Division of Public said its controlled points of entrance meant that crowds could be surveyed to be sure they were wearing masks and social distancing.

The parade is returning at 7 each evening, following a two-year hiatus. It’ll feature floats, antique tractors, princesses and queens.

Circus Hollywood is returning with two or three shows daily, along with a camel show and racing pigs, each twice day. The circus also has a petting/feeding zoo.

Almost 50 rides will be included in the Wade Shows midway.

The basic fair admission is $10, with discounts for children.

Although a lot of fair fare is tasty but notoriously not-that-good-for-you, the fair is increasingly offering vegetarian and gluten-free options, he said.

And to be more inclusive, the fair has recently added family restrooms, thanks to lobbying by Camden student Jarrett Butler, and advice for those on the autism spectrum and other disabilities.