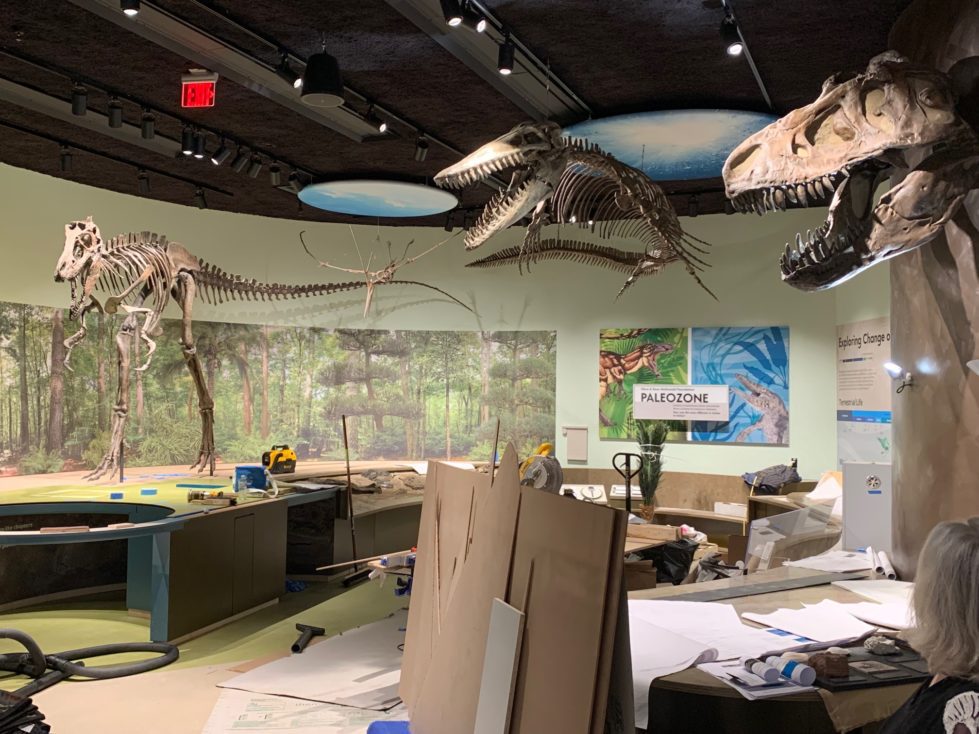 The paleozoic exhibit contains models of dinosaurs and other specimens from the past.

A lot of smiling faces are waiting to see people return to the reimagined Delaware Museum of Nature and Science next month.

Some of them have a lot of really big teeth.

And it’s impossible to tell whether those dinosaurs in the museum’s new Ellice & Rosa McDonald Foundation PaleoZone are happy to see patrons, or simply delighted to see lunch arriving on its own two legs.

Those toothy grins are part of the former Museum of Natural History’s $10.8 million evolution from 1972 specimen-oriented exhibits of, say, rows of shells, into a space that tries to tell the stories of the time and location, emphasizing the connection between man, nature and science.

Exhibits will highlight the paleozoic era, a rainforest, the African savannah, Arctic tundra, the ocean and Delaware ecosystems, from the piedmont in the north to the salt marshes of the south.

After being closed for 17 months, the museum will hold a grand opening weekend Friday, May 20, to Sunday, May 22, for invited guests and then open Monday, May 23, to the general public.

A walk-through this week showed a lot of exhibits with major pieces up but plenty of construction and final touches going on.

The atrium of the Delaware Museum of Nature and Science will include Tree of Life showing how man, animals and nature are connected.

“This has actually been a multi-year long project,” said Jennifer Accord, director of communications. “The Strategic Plan was created in 2014. I learned the new name at my interview in 2015. We started with a master design plan in 2016.

“So this has been going on for quite a while. Every single one of the images and all of the text our scientists were very involved in creating and gathering.”

The entrance will retain the original Delaware Museum of National History name carved into the doorway as a nod to its beginning.

Visitors will walk into a more open space with an atrium that’s home to a specimen-studded tree of life mural highlighting the connections of man and the natural world.

One specimen is a snake, which Accord herself transferred from an old container into this jar.

With all hands on deck, “somebody had to do it,” she said. “I will tell absolutely everybody I did that. I’m very proud.”

Delaware Museum of Nature and Science

Across from the mural will be a new display space that include rotating exhibits from local groups such as the Delaware Mineralogical Society and the University of Delaware.

Guests will be able to choose whether to head to the PaleoZone and arc around the museum to the Regional Journey Gallery, or start first in the Delaware area and do the trip in reverse.

If they head to the Paleozone, they’ll pass the new gift shop and Rest, Relax, Recharge restaurant that will sell packaged food provided by Jamestown Catering.

Papering the wall there is a blown up photo of White Clay Creek State Park trees taken by a staff member.

The PaleoZone includes a reproduction of the skeleton of a dinosaur that Shue-Medill Middle School students hope will become Delaware’s state dinosaur, the Dryptosaurus aquilunguis.

The Drypto, which seems to be running on two legs like a Tyrannosaurus, probably looked more like a bird than a lizard, nearby information says. A meat eater, he appears to have longer arms than the itty-bitty ones of the T. Rex.

An arctic exhibit shows both the summer and the winter season.

Exhibits in that area and most of the others will have lots of fiddly bits that kids can touch or otherwise explore, as well as flip books with more information.

One of the things that designers Reich & Petch of Toronto, Canada, tried to do is comply with parental requests to limit the number of screens, because they felt like their kids use screens most of the day whether they are in school or at home having fun.

In a nook around the corner from the PaleoZone, the Alison K. Bradford Global Journey Gallery starts with a depiction of a rainforest, complete with jaguar waiting to pounce.

Guests also will find an African savanna with an elephant, kudus and even a surprise appearance of … wait for it … poop on a nearby bench.

Throughout the museum, designers have left small models like that or a coiled-up corn snake to engage children.

The tundra exhibit includes a clear plastic dome that kids can duck under so they can look around and imagine what it would be like to live in that environment.

A few more feet down the walkway is the Arctic tundra, both in summer and winter, with a polar bear, walrus and more.

This is the skull of a whale that washed up on Delaware shores and now hangs in the ocean exhibit.

The museum’s ocean exhibit features the skull of a humpback whale that was trucked to the museum after the whale died in Lewes. It spent last summer in Maine being conserved before being hung above the walkway, along with display pieces that show the rest of the whale’s bones.

The Ocean area includes deep water, medium and shallow water areas. One of the few areas in the museum to use video screens will show visitors what it’s like to sink through the ocean from shallow to deep areas. It will include jarred specimens of animals who live in those areas, lighted from beneath as the video hits their depth.

The last exhibit in that area will be the sunken coral garden, which guests see while walking over panes of glass.

“This is seriously the number one thing people ask about,” Accord said. “If this is coming back.”

It also is used by groups training working animals, so they can learn to walk across the glass without fear.

Guests walking into the Delaware ecosystems exhibit will be struck by the number of trees in the space. All of them represent trees that grow in Delaware, from the temperate northern forest to the Southern mixed forest, including the bald cypress, beech and loblolly pine, the Delaware state tree.

Entrances to the regional exhibit will show off the trees, no matter which doorway visitors use.

Some of the trees mask support beams. The trees were built by Dixon Studios in Tucson, Arizona. Mile Galer, who has been helping install the exhibits for the past two months said the the trees begin with a metal rebar base. That’s covered in spray foam which is then carved into tree shapes. Branches start as metal pipes. The structure is covered with fiberglass and sculpting epoxy, and then painted to mimic the trees. The leaves are fashioned from silk.

All of the trees are anchored to the ceiling for safety, he said.

Many exhibits are built into the limbs or the trunks of those trees, where smaller animals or insects can be found, and allowing spaces for children of all sizes to explore.

The museum will not host any traveling exhibits during its first year of being reopened, Accord said.

It already has about a dozen weddings and special events planned and wants to leave that space for rental right now.

The first one will be May 4, but the renters have been warned that the spaces may not be ready, she said.

“We’re just so happy to have people back,” Accord said.

Tickets for opening day are available at delmns.org