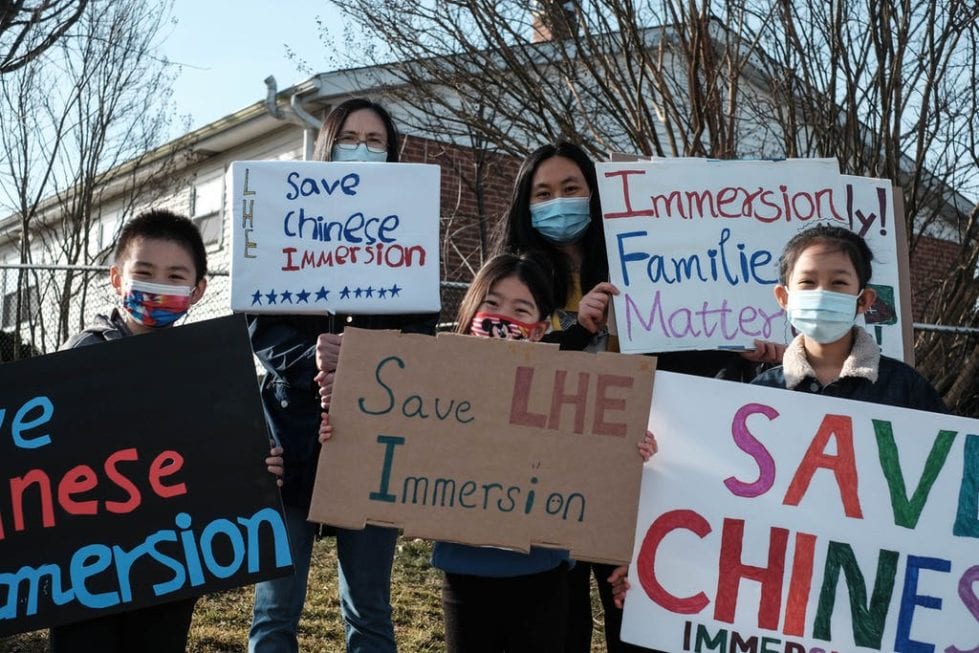 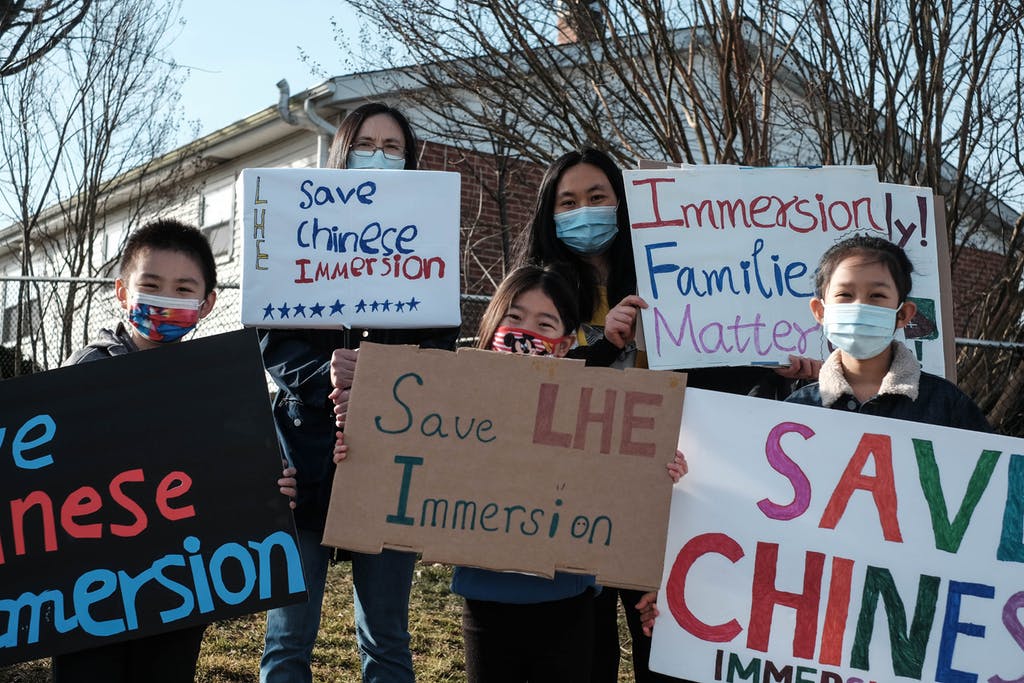 DEL6: From left to right: Jerry Liang, Lin Xiong (mom in back), Jeeya Yau, Chery Gupta (mom in back) and Azalea Gupta. All kids here are enrolled in the program. Photo by Taylor Goebel

Dozens of young children and parents crowded outside Linden Hill Elementary School on a brisk Tuesday morning, donning masks and waving signs that read, “Save Chinese Immersion!” and “We love this immersion program. Don’t stop it!”

It had been just days after families were told the school’s Chinese Immersion program would be canceled after the 2020-2021 academic year.

Red Clay Consolidated School District officials informed the families by email on March 19, a shock to parents who said their children will be displaced as a result of the district’s decision.

“We had no idea the program was in jeopardy,” said Fay Kennish, whose daughter Chelsea is a first grader enrolled in the program. Kennish was planning to keep Chelsea in the program until she graduates high school.

“Our children’s educational pathway has already been laid out for them, so now we’re all kind of uprooted,” she said.

Unlike a typical language course, the Chinese Immersion program runs kindergarten through 12th grade, requiring students to learn and speak Mandarin for half the school day, while immersing them in Chinese culture. Courses like math and science are taught in Mandarin to program participants.

The program began four years ago and currently has about 100 students enrolled, according to Kennish, who created an online petition urging the district to continue the program. Within days, more than 1,000 people included their signatures.

“The school announced that it can no longer sustain the program due to a number of factors,” district officials said in a statement Tuesday, citing a declining interest in the program, a “significant” number of requests to leave the program early and building capacity and class size issues.

Per the statement, families in the program were offered a “choice of educational options” for the next academic year, ensuring students can continue attending Linden Hill regardless of whether they live in the school’s attendance zone. They can also return to their original school or apply to attend another Red Clay school in Fall 2021.

Kennish called some of the district’s reasons for ending the program “shortsighted.” For her daughter, being able to speak a second language is important.

Parents Wen Zhao and George Peart moved from Brandywine School District to Red Clay because of the Chinese Immersion program. They were going to enroll their children, who are currently two years old and seven months old, when they reached kindergarten age.

“We just bought a house in the beginning of February and now, two months later, to hear that they’re getting rid of the program, it’s heartbreaking,” Peart said. “It goes against everything we were planning for.”

Peart, a certified public accountant, said language skills can attract new businesses and talent to Delaware, and they’re important in terms of trade and business, especially considering the growth of China’s economy.

Peart learned Spanish in high school and taught himself Japanese, but he would have spoken both languages more fluently if he’d had a program similar to Chinese Immersion growing up.

“If I had really strengthened that when I was younger, I would be that much better at my current job,” Peart said. “Right now I’m using Google Translate. How good is that? Here we had a chance to build a pipeline of students who are bilingual.”

Kelli Carrubba was also planning to enroll her son Jacob, 3, when he enters the school system. Carrubba said the Chinese Immersion program was setting a better future for her daughter Eleanor, teaching her values Carrubba says she didn’t get to learn in kindergarten.

“It’s more than just a language,” Carrubba said, as her daughters Eleanor and Amelia, 8, held a sign reading, “Embrace Diversity.”

Azalea Gupta, a 7-year-old student in the program, can now speak Mandarin with her mother, Chery.

“She feels awesome when she feels like she can communicate with me,” said Chery, whose first language is Mandarin. “You know that feeling? ‘Finally, I can understand what my mom says when she talks to her family in China.’”

Linden Hill Principal Melissa Brady informed families on March 22 that “the school is going to take a step back to ensure that the school community has a common understanding of the challenges and complexities of sustaining a Chinese Immersion program at Linden Hill.”

Linden Hill plans to hold a listening session for the families later this week, per the statement.

Many families in the program believe learning other languages and cultures is important now more than ever: The announcement to shut down the Chinese Immersion program came two days after a deadly shooting in Georgia that left eight people dead, including six women of Asian descent. The organization Stop AAPI Hate recently reported nearly 3,800 hate incidents against Asian American and Pacific Islander communities between March 2020 and February 2021.

It’s one of the reasons why Linden Hill parents are eager to keep the program running.

“With the climate and everything going on in this country right now, we feel like we need to be building bridges, not knocking them down,” Kennish said. “It’s not acceptable.”