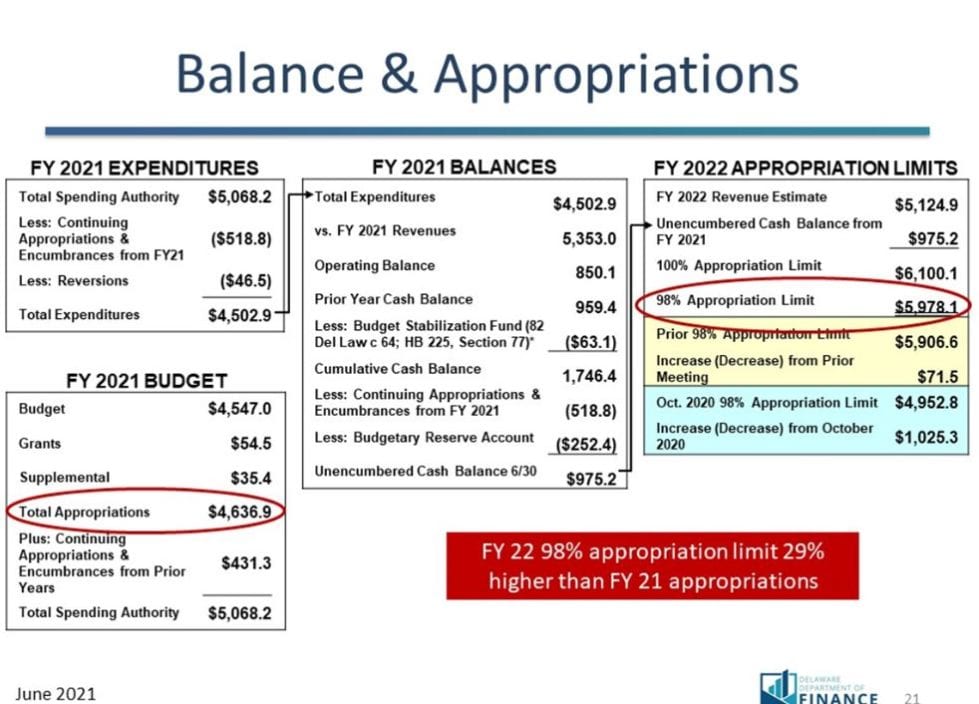 With Delaware’s revenue surplus holding steady at $1.12 billion, state budget bills dropped into the General Assembly Friday include a one-time $1,000 bonus for state employees and $500 bonus for pensioners.

State employee expenses will soar in Fiscal Year 2022, which starts July 1, according to the final expenditure and revenue estimates by members of the Delaware Economic and Financial Advisory Council. It met Friday for the final time before its June 20 deadline of making recommendations to the General Assembly.

The employee expenditures will include raises to $11 an hour for all state workers by Jan. 1, 2022; raises for teachers and paraprofessionals; the one-time bonuses for state employees and pensioners; and money to cover what many called the 27-paycheck year.

The state pays employees every two weeks, but on leap years like 2022 when there are 29 days in February, the first paycheck will fall on Jan. 1. That effectively means the state will have to provide pay for 27 paychecks and is among $71 million added to the state expenditures.

The employee bonuses are detailed in House Bill 251. It will spend $221,121,200 to provide one-time funded projects through the Office of Management and Budget.

The main state budget, detailed in House Bill 250, totals $4.771 billion. It does not include the state’s grants-in-aid bill, which supports non-profits providing state services, and is expected to be $57 million and the bond bill is expected to be a record $894 million, which pays for transportation, capital projects and state infrastructure.

“If there’s any message in this meeting, it’s what what you’re seeing is extraordinary with 18% revenue growth in fiscal year 21,” said Rick Geisenberger, secretary of the Department of Finance. “When you look at next year, you’re looking at minus-4% revenue growth.”

That extraordinary growth included corporate taxes (all of the year’s initial public offerings have been in Delaware, officials said in May); near-record real estate transfer taxes; an influx of COVID-19 spending and stimulus cash; and what officials called “historical amounts of revenue” in personal income tax.

The high payments contrasted sharply with what many thought would be significantly smaller income tax for many reason. Corporate bonuses remained high in 2020. Estimated payments soared, perhaps because people expected to have a bad year and underestimated what they owed and then had to catch up.

And, speculated David Roose of the Department of Finance, many people took capital gains in the market sell-off in March 2020 and may have held on to those gains rather than pay tax because they feared they might need the cash, even if it meant a penalty later. With a better economy than expected, they ponied up.

With fears that Fiscal Year 2022 will not end up as flush, Geisenberger said DEFAC would recommend spending up to the state’s benchmark of $4849.5 million, which House Bill 250 and House Bill 251 go slightly over.

Much of the excess revenue is expected to be plowed back into the a state fund established by Gov. John Carney for the purpose of setting aside revenues for problematic years. The fund helped the state cover its budget last year when COVID-19 trounced revenues.