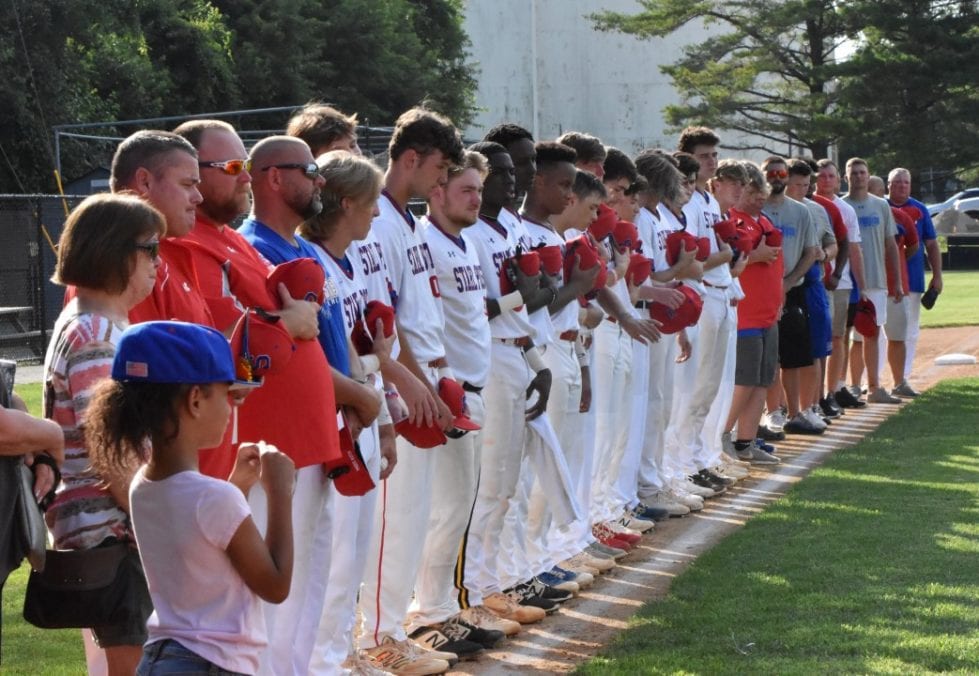 On what started out as a beautiful night for baseball Monday, Stahl post 30 played its first game in over 30-plus years without their longtime coach and manager Bob Anderson.

Bob has graced Wilson field with Stahl Post for over more than three decades as head coach, team manager or a member of team.

Before Monday night’s game against Del Vets, Stahl Post 30 wanted to honor Bob. Bob’s wife, Charlotte Anderson, was accompanied by their two sons Robert Anderson Jr and Matthew Anderson, with many more family members by their side.

Campbell had a plaque made in Bob’s honor that he presented to Charlotte Anderson, recognizing the many years of Bob’s dedication.

“With Bob’s passing we have some big shoes to fill and we promise to do all we can to fill those shoes,” Campbell said.

Then Robert Jr. and Matthew Anderson were asked to throw out the ceremonial first pitches of the game.

Robert Jr. and Matthew said their dad was most proud of the four years in which Stahl Post won the Delaware American Legion state championship “but he always talked about the 2013 team.”

In 2013 Stahl won their first two games in the regional looking very promising to represent the Mid-Atlantic region in the world series, but fell to the eventual world series champions Brooklawn, New Jersey.

“Bob loved baseball and the kids,” Charlotte said. “It was all about the kids.”

It was always easy at the field to tell Bob was well liked and loved by his family and friends.

A special thanks to the Del vets Coach Mike Buono as well as Stahl Post coaching staff and the Anderson family for allowing us to be a part of honoring Bob Anderson.

The game itself ended up being cut short by storms. To check for a make-up game or the rest of the schedule for the Delaware American Legion baseball season, go here.