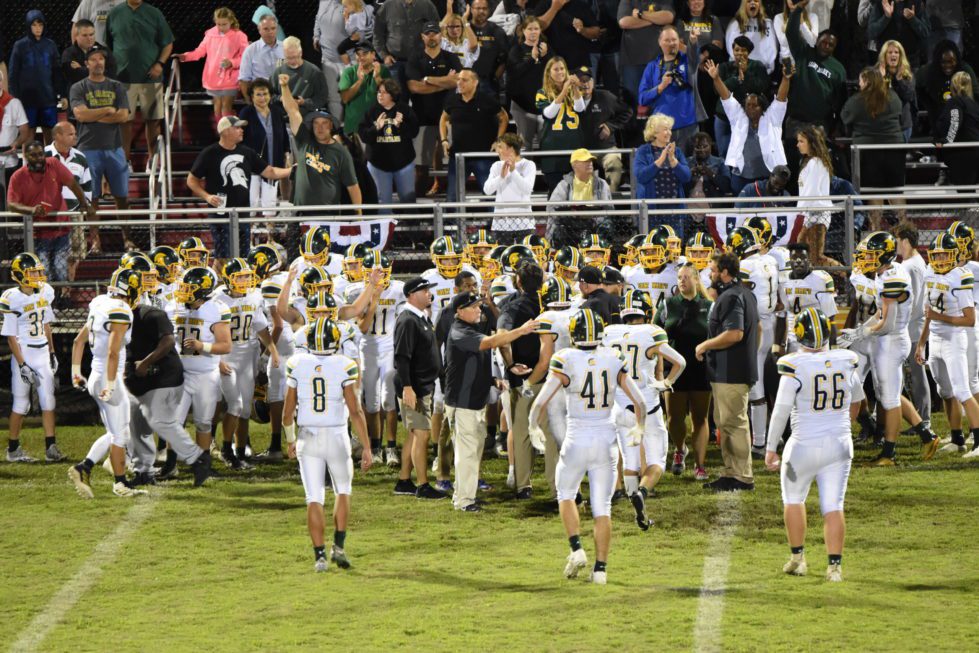 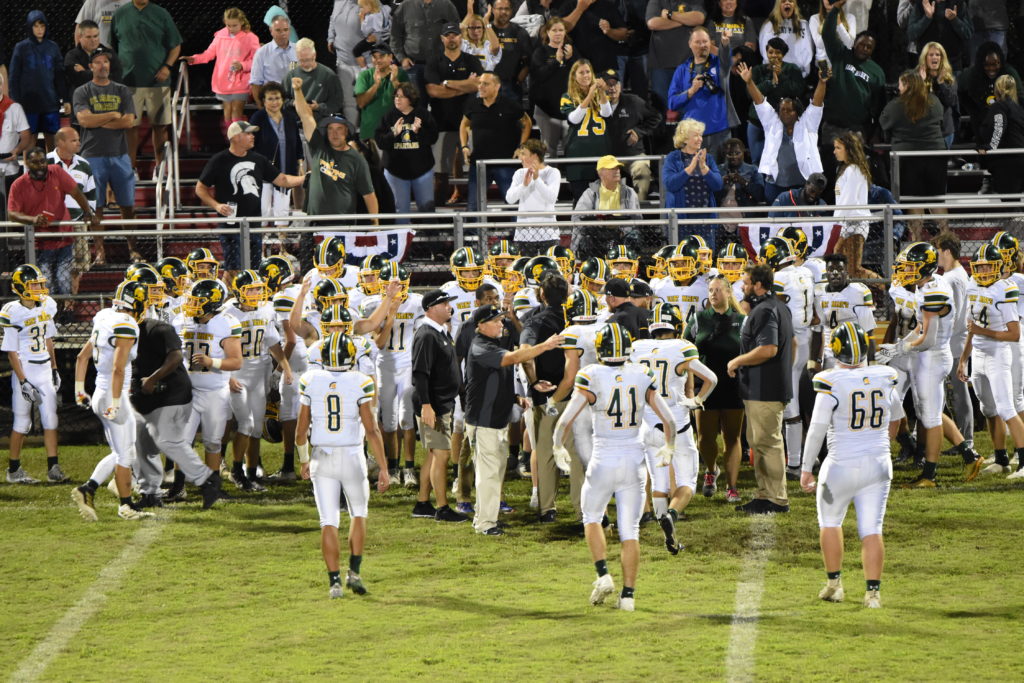 St Marks celebrating after a 21-20 win over Red Lion

RED LION – St. Mark’s used a powerful ground game and some timely defense to escape Red Lion Christian Academy with a 21-20 victory in a Class 2 intradivisional game on Saturday night.

The Spartans threw the ball three times unsuccessfully on their first drive, but after Red Lion lost two linemen for the evening, St. Mark’s found success with the run, particularly inside. They found themselves trailing, however, after Lions quarterback Mac Krauss hooked up with Kyle Manley on a 47-yard touchdown late in the first. The two-play drive took about 30 seconds.

After that, they took to the ground to grind out a 75-yard, 10-play drive that ended with St. Mark’s quarterback Chase Patalano going up the middle three yards for a score. Matt Hanich and Patalano did the work on that drive, with all of the yards gained on the run except for one screen pass to Hanich that went for seven yards.

The Spartans forced a Lions punt from their end zone, taking possession at the Red Lion 30 after a penalty. Donovan Artis and Hanich went to work, with Artis closing it out with a one-yard scoring run.

The Lions tied the score after taking the second-half kickoff. The 80-yard drive included a 14-yard pass to Seth McGroerty on a third and eight, and another third down conversion on a seven-yard run by Breon Simms. Daejon Jones ended the drive with a 48-yard touchdown run around right end, going untouched into the end zone.

A penalty, however, forced Red Lion to kick off from deep in its own territory, and Logan Klein returned the ball 16 yards to the Lions’ 34. Facing a third and five from the Lions’ 29, Patalano completed a pass to Jack Burns at the one, and the quarterback snuck it in on the next play for the eventual winning score. But it wasn’t easy.

Later in the third quarter, the Lions embarked on an 83-yard drive in an attempt to tie the score. The first play of the drive covered 43 of those yards as Krauss hit Jones with a successful screen pass. The other big play came on third down and 22 at the St. Mark’s 36, with Jones catching a pass that went for 29 yards. Jones scored on a run on the next play, the first of the final quarter.

With the capacity crowd cheering them on, the Lions lined up for the extra point. The snap was high, and McGroerty, the holder, attempted to run the ball into the end zone for two points. He was stopped inches short of the goal line, and the Spartans kept the one-point lead.

Shane Caleb blocked a Saint Mark’s punt on the next drive, and he picked up the loose ball and started downfield. A Spartans player was able to catch up to him and poke the ball loose from behind, and St. Mark’s kept possession. The Spartans burned six and a half minutes off the clock before turning it over on downs at the Red Lion 16 with 42 seconds remaining.

An interception by Tahj Johnson sealed the victory.

The Spartans improved to 2-0 and will host Woodbridge next Friday at 7. Red Lion fell to 0-1 and visits Delmar on Friday at 7:30.