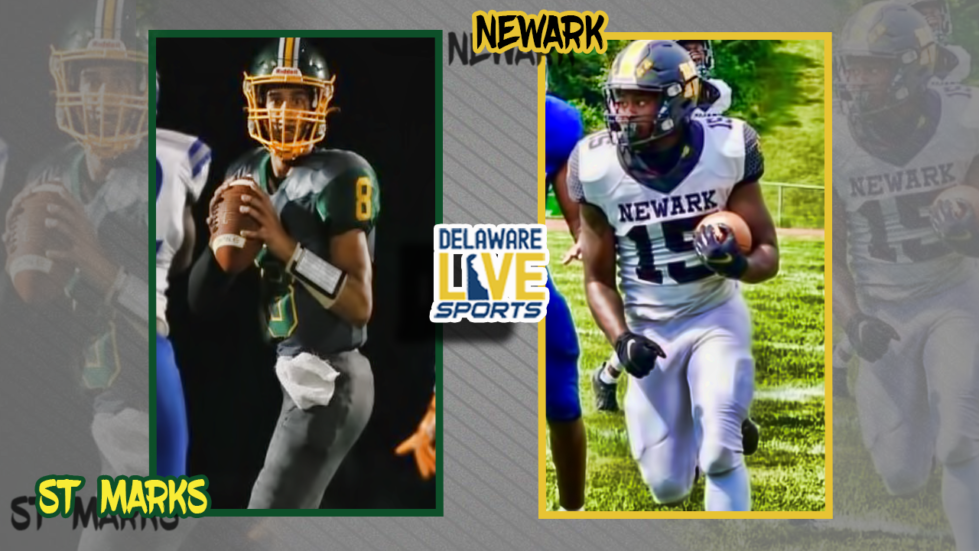 Saint Mark’s football scored early & often against Newark Friday night at  the Graveyard. After receiving the opening kickoff  the Spartans went right to work and never looked back in a 34-6 win.

With less than a minute off the clock the Spartans were Facing a second down and eight when quarterback Chase Patalano hit wide receiver Jack Burns down the right side which originally appeared to be a touchdown, but Burns was ruled to have stepped out at the 2. Donovan Artis finished the drive with a short touchdown.

After an interception by Wes Millman of Saint Mark’s the Spartans would strike again. The Spartans only needed one play to score after the turnover. Tahj Johnson would take a pitch around the left side and scamper in for the touchdown. After a successful extra point St Marks would hold a 14-0 lead with less than three minutes off the clock.

The Yellow Jackets only scoring drive began at their own 20 yard line. The Yellow jackets marched down the field and finally found pay dirt  when Markee Ellerbe ran around the right end and scored. During that drive Newark was able to convert on third down three times as quarterback Damian Wright was able to complete passes to keep the drive alive. The extra point was no good and Saint Mark’s held a 14-6 lead.

The Spartans added to their lead in the middle of the second quarter.  The Spartans’ defense forced a Jackets punt from the back of the end zone. As a result St Marks would take over at Newark 37 yard line. After a few nice runs from Spartans running back Matt Hanich, Patalano found Jabri White open in the corner of the end zone for the touchdown. After another successful point the lead was now 21-6 Spartans.

The Spartans capped off the first half scoring with a quick strike just before halftime. Patalano and Burns connected again with Burns as he spun out of tackles going down the right sideline for a score with just eight seconds to go before the half. Giving St Marks a 28-6 lead after one half.

St Marks would complete the scoring in the third quarter. Artis took a hand off up the middle basically untouched for a 27 yard touchdown run midway through the third quarter. That score would be the last score of the game as St Marks defeated Newark  34-6.