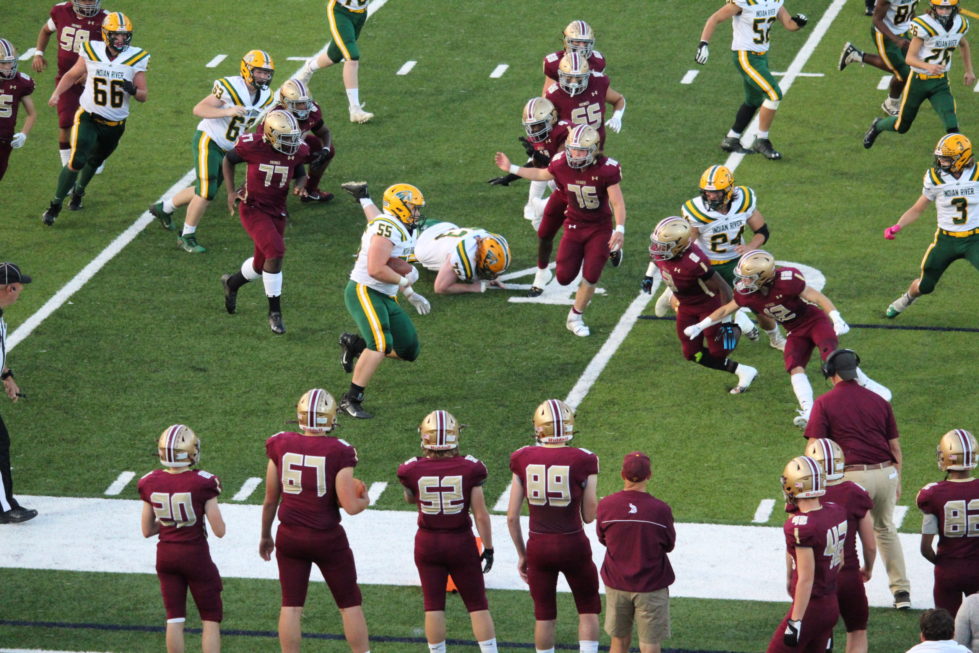 Two goal-line stands, along with a few drive-ending turnovers, helped St. Elizabeth preserve its lead over Indian River as the Vikings remained unbeaten after a 14-7 victory Thursday night at Abessinio Stadium.

The Vikings staked themselves to a 14-0 lead at halftime with two second-quarter touchdowns. Their first score wrapped up an 81-yard drive that began with the recovery of an Indians fumble. Chris Caracter and Quasim Benson did all of the work on that drive, trading handoffs for the first six plays. The first quarter ended with a 27-yard run by Benson to the IR 40. When play resumed in the second, Benson ran six more times, the last of which went for 16 yards around right end for a touchdown.

The Vikings’ next drive began at their own 22 after an IR punt, and the offense went to work again. St. Elizabeth quarterback Brett Smick kept the drive going twice while facing a third and 10 by finding Mike Downes with passes. The first went for 25 yards to the St. E’s 47, and the second was good for 16 yards to the Indians’ 26. He followed that second pass with a floater to Caracter just inside the right sideline in the end zone for a touchdown with 1:54 left in the half.

That would be it for the Vikings’ scoring for the night, however. Indian River took the second-half kickoff and drove all the way to the St. Elizabeth 2, where the Vikings made a tackle on fourth and goal to force a turnover on downs. That drive took nine and a half minutes.

The Vikings went three and out on their drive and were forced to punt from their own end zone. That gave IR possession at the St. E 22, but again, they could not convert a fourth down.

Indian River began a drive in the fourth quarter at the Vikings’ 49, and they moved the ball well, including a fourth down pass from quarterback Ryan Sheerer to running back Hayden Hall that was good for a first down. Another pass to Hall, this time on third and 11, set IR up at the Vikings 5, but the exchange on the next snap was botched, and St. Elizabeth fell on the fumble.

The Vikings, however, fumbled it right back to the Indians, and this time, Dalton Hall covered the six yards to the end zone to cut the Vikings’ lead to 14-7 with 3:09 remaining.

St. Elizabeth recovered the onsides kick, but their offense could not generate any first downs. A muffed punt gave the Indians one last chance starting from the Vikings’ 40. They were able to pick up one first down, but on fourth and nine from the St. Elizabeth 29, Sheerer dropped back and was greeted immediately by Vikings lineman Carl Taylor, who bearhugged Sheerer to the turf. The Vikings were able to run out the clock with a couple of kneel downs.

The Vikings improved to 5-0. They begin a four-game road trip next Friday at 6 p.m. at Dickinson. Indian River (2-2) travels to Polytech next Friday. Kickoff is scheduled for 7 p.m.