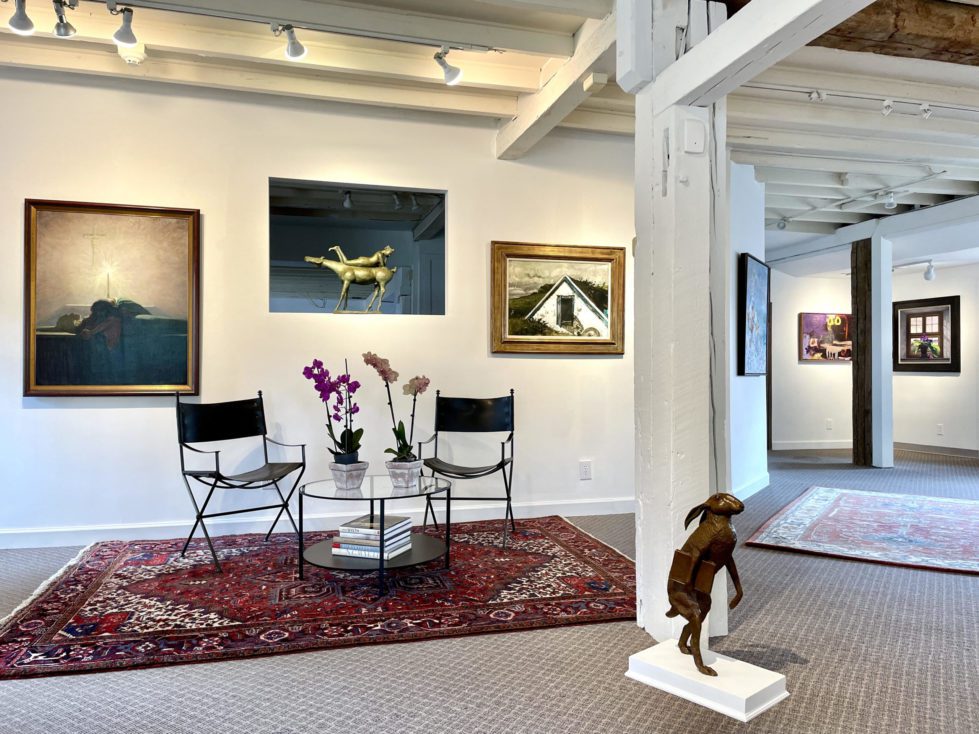 Somerville Manning Gallery’s owner and director rushed to ready its temporary location on Kennett Pike for the 40th anniversary show.

When Somerville Manning Gallery sent out invitations to a “surprise exhibition” for its 4oth anniversary show, owner Vickie Manning was hoping to create a little drama to stir patron interest.

“Be careful what you ask for, right,” said Rebecca Moore, the gallery’s director Thursday.

Mother Nature handed them plenty of drama when the Brandywine River flooded its banks Sept. 2 as storms from the former Hurricane Ida swept through. The water washed away the gallery’s sculpture garden and rose to the top of the second-floor steps of its Breck’s Mill home.

The art inside the gallery was untouched, and most of the art outside can be saved. The building– owned by Hagley Museum & Library — has been deemed sound by structural engineers.

But it has no electricity and is unlikely to for the foreseeable future, making it difficult to host a public art show and necessitating a scramble by Manning and Moore.

“The turmoil from the last two weeks has been surreal,” Manning said.

They’ve settled temporarily in the former Hardcastle Gallery, 10 minutes away in Centerville. That space was filled during the week with contractors rushing to complete projects so the show can be mounted.

Owner Vickie Manning is pleased the anniversary exhibition will open Wednesday, Sept. 22, only a few days beyond its original date.

“We purposely did not do a catalog to keep it all a surprise, which was the intention even before the flood,” Manning said. “Now with the addition of the flood, we have a real surprise.”

Manning had asked artists or owners to submit a piece of work that had never been shown in public before. It didn’t have to be new, but she asked that it never have been shown widely.

Jamie Wyeth is delighted the anniversary show will go on.

“I am so pleased to learn due to Vickie Manning‘s indomitable spirit the gallery is going ahead with their planned 40th anniversary exhibition,” Wyeth said in an email. “I am excited that one of my just completed works will be a part of the exhibition. Onward and upward, Vickie.”

The Somerville Manning situation brought back stressful, but ultimately triumphant, memories for Jackson.

“Us artists work a long time on these paintings in the hopes that people get to appreciate and enjoy them,” said Robert Jackson. “When some disaster occurs, it is wonderful when a gallery steps up and believes ‘the show must go on!’”

Jackson was about to open a show in at New York City gallery in 2012 when Hurricane Sandy hit and the gallery ended up with 6 feet of water in it.

“I was distraught, as this is how I make my living,” he said in a statement. Two weeks later, “we had an opening to the sound of generators and spotlights up and down the street. The turnout was less, but it was tremendously successful and my best opening ever. Those who came out came out to support the gallery and artists. I certainly hope Somerville Manning finds the support and reason to celebrate on this 40th anniversary.”

Evans said she was proud of Manning for soldiering on.

“Art gives us a reason to keep going. It gives us hope and it lifts our spirits,” Evan said. “We need that now more than ever.”

Somerville Manning Gallery was founded by Manning and then-partner Sadie Somerville. The original gallery was at Centerville Center in Greenville for 12 years. Then their lease wasn’t renewed so another store could expand, a traumatizing experience, Manning said.

She wanted to move into a nearby house, but zoning rules wouldn’t allow it. Realtor Leigh Johnstone suggested she consider the second floor of Breck’s Mill. Sculptor Andre Harvey was already there, and he thought that created a great synergy in a gorgeous setting.

Manning was instantly entranced, even though others thought the location was too out of the way.

“I was like, no, I want to be a destination gallery. I want people that want to see the gallery,” she said.

Hagley built the space out for them, and the only thing that the gallery has changed in the 28 years it’s been there was to add two walls. Sadie Somerville left the business about a decade ago, and Moore moved in as director.

Somerville Manning was known partly for the major exhibitions it created with a variety of artists.

They’ve done shows featuring the Wyeths — N.C., his son Andrew, and grandson Jamie — that corresponded with major retrospectives of their work on show at the nearby Brandywine River Museum of Art.

Their annual American Masters show features the Wyeth work as well as artists who were working around the time. They have included paintings from internationally hailed artists such as  John Singer Sargent, Picasso and Mark Rothko.

“So our wheelhouse is really much greater than just our Breck’s Mill showroom,” Manning says.

The flooding at Breck’s Mill during Ida knocked over garden sculpture but didn’t touch the gallery itself.

The Brandywine River has flooded Breck’s Mill before, with water getting into the first floor post office.

Manning’s first hint that the Sept. 2 flood might be different came when she got a call from Hagley’s head of maintenance warning her not to come in for a while. When Manning arrived about 11 a.m., the first thing she noticed was that the garden sculptures were missing.

“Luckily, once the water went down, we realized that almost all of them were actually still on the premises, just not in their original locations,” Moore said.

Two were by Vicki Vinton, who usually works as a painter. Her two 6-foot-tall sculptures out of powder-coated steel were named Joy and Presence. They found one on its side as the waters receded. The other had been pushed down the river under the Rising Sun Lane bridge.

Manning said she has visions of it rising from the water in 1,000 years, like the Statue of Liberty in a “Planet of the Apes” movie. In real life, Manning and Moore plan to retrieve it when it’s safe to do so.

Rikki Saunders’ bronze sculpture of greyhound dogs were knocked over and buried in silt, but can be retrieved. Olivia Musgrave’s bronze horses with Amazons on their backs will need to be cleaned, but not repatina like a Marjorie Tory bronze sculpture of two swans rising into flight.

Hagley is working with the gallery to clean the pieces.

Manning plans to re-open the gallery at Breck’s Mill as soon as possible.

Until then, she will hold the anniversary show at the former Hardcastle site at 5714 Kennett Pike in Frederick’s Country Center. The new owner of Frederick’s, Alan Libadas, has happily allowed them to have a month to month lease and helped facilitate redoing the interior and exterior, Manning and Moore said.

They plant to keep the show open a month. The opening is private, but starting Sept. 22, the show will be open Tuesdays through Saturday from 10 a.m. to 5 p.m.

Moore is struck by the irony of a flood that not only hit in the gallery’s 40th year, but as the anniversary show was going to open.

“This show not only celebrates the 40 years that Vickie and the gallery has been in business, but I think we also wanted to celebrate our relationships with our clients and our artists as well,” Moore said. “Highlighting that in the variation of these major artists that we’ve worked with in the past has really been a pleasant experience.”