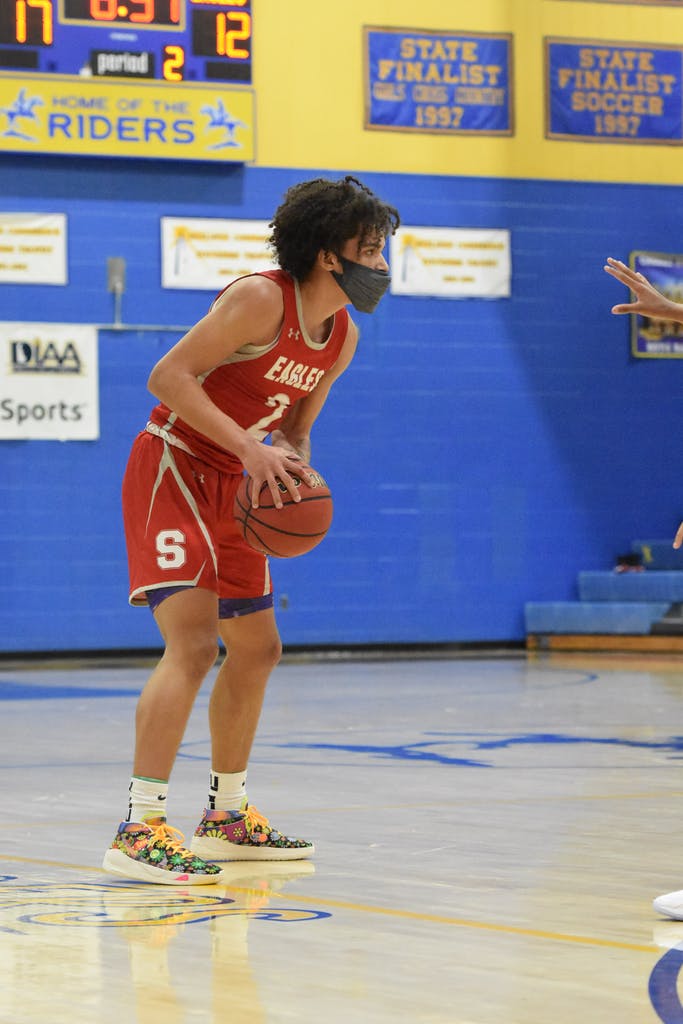 Elijah Credle of Smyrna Credle finished the game with 22 points, 3 three-pointers and went 7-for-8 from the line.

Smyrna’s “Moo” Salako sent an early statement with an authoritative slam to start the game, but it was free-throw shooting that iced the Henlopen conference title for the Eagles Saturday over a very talented Seaford squad from the Henlopen-South. The final score was 59-53.

The game was very close in the first half, with 10 lead changes and four ties. Elijah Credle led all scorers with 12 points in the half, while Seaford’s Brent Ricketts poured in 11. The two teams were tied at the break at 26-all.

Smyrna led 30-28 early in the 3rd quarter when Salako went on a “flush-fest” slamming two shots and completing the “alley-oop” from Credle on three consecutive possessions to put the Eagles in front 36-30. Credle then nailed his 3rd three-pointer of the game to extend the advantage to 39-30, and Smyrna took the largest lead of the game into the final quarter at 43-33.

Seaford made a gallant effort in the 4th quarter. Ricketts swished 2 threes & teammate Tyrese Fortune added another and the comeback was on! Following Ricketts’ 2nd three pointer, the Blue Jays had cut the deficit to 49-46 with 1:28 left in the game.

That’s when Smyrna found its groove at the free-throw line. The Eagles converted all 10 shots from the line in the final 70 seconds with Credle going 6-for-6 and teammate Robert Wiley 4-for-4.

Credle finished the game with 22 points, 3 three-pointers and went 7-for-8 from the line. Moo Salako scored 13 and teammate “Lish” Gregory added 12.

Seaford is the 5th seed in the upcoming state tournament and will face the winner of the opening round match between Sussex Central and Delmarva Christian.

Smyrna is the 6th seed and will meet the winner of an opening round game between St. Marks and Red Lion Christian Academy.