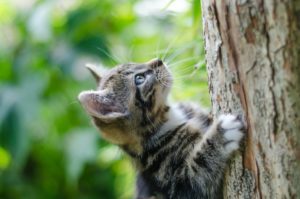 The state is warning people in the Smyrna Landing Road area that a black stray cat in that area has tested positive for rabies.

A stray cat in the Smyrna Landing Road area in Kent County has been diagnosed with rabies.

Two people in the residential neighborhood were potentially exposed.

The Delaware Division of Public Health is warning anyone who lives or spends time in that area who may have interacted with a stray cat to report it to the state or their doctor so they can start post-exposure prophylaxis treatment (PEP).

The state said the cat was a black short-hair one, but the age wasn’t known.

Since Jan. 1, 2022, DPH has performed rabies tests on 118 animals, eight of which were confirmed to be rabid, That includes two raccoons, three foxes and three cats including this positive case.

DPH only announces those rabies cases for which it is possible the animal had unknown contacts with additional humans or pets.

In 2021, DPH performed rabies tests on 188 animals, nineteen of which were confirmed to be rabid, which includes one dog, one deer, one fox, one cow, two skunks, three cats, four raccoons and six bats.

Anyone who thinks they might have been bitten, scratched or have encountered a cat in this area should immediately contact their health care provider or call the DPH Rabies Program at 302-744-4995. An epidemiologist is available 24/7.

Anyone in the area who thinks a cat may have bitten their pet should call their private veterinarian to have their pet examined and treated, and the exposure reported to the Delaware Department of Agriculture.