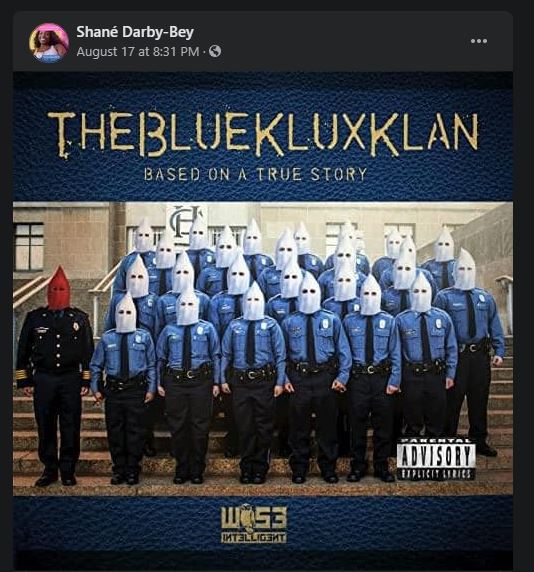 Darby originally posted the graphic on Aug. 17, and, according to comments from a videotape of the council meeting, reposted it Thursday, along with more comments about police. Later in the day, she took it down.

The caption above the graphic reads, “The Blue Klux Klan” and “Based on a true story.”

Darby said earlier this week the post was meant to convey the history of policing in America, one she said is embedded in anti-Blackness.

“The history of policing in our country is embedded in anti-Blackness, it’s embedded in the oppression of Black people,” Darby said. “So when police were established, it transferred from it being KKK members to police officers so the mentality of how they operate is similar to the KKK. A lot of members of the KKK are part of the police department.”

Darby said that policing practices are “embedded in the same anti-Blackness and the same oppression of all Black people and Brown people that this country is founded on, and still embraces today.”

Darby said she didn’t know of any specific members of the Wilmington Police Department who were members of the KKK but said the system as a whole was anti-Black.

Asked whether the Wilmington Police Department, which Darby oversees as a city councilwoman, is a racist organization, Darby said, “Yeah, it’s a system that is racist, that is embedded in racist ideology, so it can’t escape it. The very founding of policing is anti-Black.”

Asked earlier in the week about the post, Mayor Mike Purzycki condemned it and encouraged other council members to do the same.

“I am offended by Shané Darby’s post and utterly disgusted by her comments,” Purzycki said. “The men and women of our outstanding police department do not deserve this kind of treatment. This is just the latest, but most offensive, of a number of race-laced posts made by this council member and it has to stop. I encourage other members of council to renounce her comments.”

“I am disgusted and appalled that someone in a position of leadership would use her platform to spew such disgusting, hateful and inaccurate sentiments.,” Leonard said. “The men and women of police agencies in Delaware, including the members of the Wilmington Police Department, work tirelessly to protect and serve their communities.”

Such rhetoric only further divides police and the communities they serve, he said.

“It’s clear to me that she has no interest in bridging the gap between the police and communities of color,” he said. “Her only goal is to tarnish members of law enforcement with false allegations of racism, and in doing so, all she does is show her ignorance. I call on her to apologize to the men and women of the Wilmington Police Department, however its not within her character to do so, and frankly it would be meaningless.”

On Thursday night, Council members Loretta Walsh and Zanthia Oliver, also Democrats, never named Darby but talked about a council member who had embarrassed the council on social media.

Walsh said she was sure she had embarrassed the council before and has been upset at things other council members did publicly.

Walsh said council members were like police officers in that they are always on duty, even when they are not on the clock.

Walsh said that one of the things that council members needed to remember while trying to help their own districts was to do no harm to the rest of the city.

“This continuation of building bricks between the black and white and brown community of our city has to stop,” Walsh said.

A few minutes later, Oliver said she wanted to say something about the behavior of a council member. Without naming Darby, she  said she hadn’t seen the posts but had gotten a lot of phone calls about them, “and I just don’t like it.”

“I’m in favor of having a conversation with the Wilmington PD or the Fire Department,” she said. “Do I like a lot of the things that the police are doing? No. I sent my emails to the president, who I respect,” referring to Council President Trippi Congo.

Oliver said the city has enough negativity going on with our kids killing each other.

“But to do things publicly to embarrass or hurt another race or color, I disagree with it,” Oliver said.

Congo called on Darby as soon as Oliver stopped speaking. Darby did not address the comments.

She said she had received a donation of 30 book bags and hygiene kits and invited any council members who knew someone who needed either to reach out, and then ceded the floor.

On Friday, however, a post on her Facebook page said police oppress Black and Brown communities and that modern policing started as slave patrols.

Wilmington Police should be held accountable and the Law Enforcement Officers Bill of Rights should be repealed, the post said.

“I said what I said!” the post said. “I am not here to make anyone feel comfortable about this topic.”

The post said she would not be silent and that politics wasn’t going to change her viewpoint about policing.