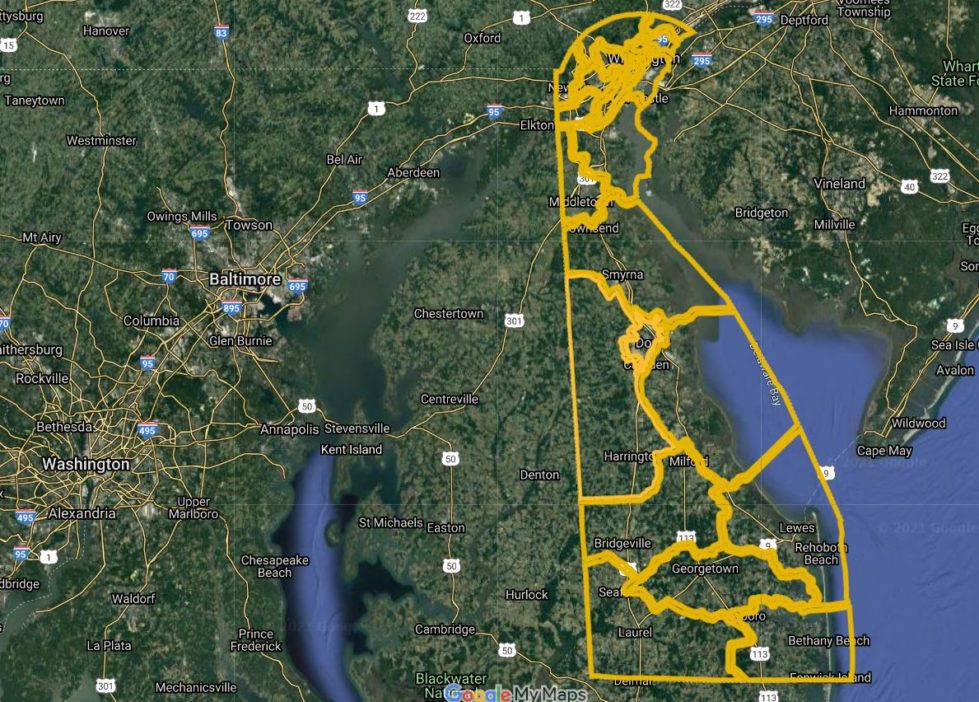 Most Senate districts will change some boundaries , but only slightly.

Democratic leaders in the State Senate have published draft maps of Delaware’s 21 Senate districts and announced a date for the legislature to consider a final redistricting bill.

The Senate will convene in a special session on Nov. 1 to finalize the maps that will define Delaware’s House and Senate districts for the next decade.

That’s just six days before the deadline for both parties to agree on redrawn districts, given that candidates must live in their constituent districts for at least 1 year prior to the Nov. 7, 2022 general election.

Despite speculation that Sussex County would gain a seat in the Senate due to population growth in the coastal region, draft maps show that all districts will more or less remain in their current geographic locations, albeit with some changes to the exact boundaries.

For example, Senate District 19, currently represented by Republican Sen. Brian Pettyjohn, currently spans from Long Neck to Delaware’s border with Maryland. If the draft maps are adopted, that district would only go as far west as Seaford.

Similarly, Senate District 18, represented by Republican Sen. Dave Wilson, would be downsized. That district currently spans from the Delaware Bay near Broadkill Beach to the Maryland border west of Bridgeville. Under the draft maps, Wilson’s district would encompass Milford and follow Route 30 southbound toward the western reaches of Milton. It would maintain its border with Maryland and the areas in between.

Senate District 6, a seat held by Republican Sen. Ernie Lopez, who has announced he will not seek reelection, is the district most speculated to be split up. If the draft maps are adopted, however, that won’t happen. The redrawn district would actually grow a bit, albeit into a sparsely populated area in and around Prime Hook National Wildlife Refuge.

Moving north, Kent County’s only Republican-held districts, 15 and 16, would also remain mostly untouched. Those seats are held by Sen. Dave Lawson in the west, from Harrington to Kenton, and Sen. Colin Bonini in the east, from Slaughter Beach to Little Creek.

Senate District 17, which encompasses Dover, would mostly remain the same. That seat is held by Democratic Sen. Trey Paradee.

As you get closer to Wilmington and population density increases, the districts become smaller. The largest district north of Dover is District 14, held by longtime Democratic Sen. Bruce Ennis. That district will be cut back in size.

The southern reaches of Senate District 14 runs from Leipsic to Smyrna and Clayton. That won’t change, but Ennis will be losing the northeastern part of the district, which currently runs all the way to the Chesapeake and Delaware Canal, to Senate District 12, currently held by Democratic Sen. Nicole Poore.

He’ll pick up a bit of ground near Townsend and north of the canal near Glasgow, but those areas aren’t densely populated.

Most of the districts in and around Wilmington will remain the same with the exception of Senate District 5, currently held by Democratic Sen. Kyle Evans Gay. That district, if the draft maps are adopted, will span east to the Delaware River near Claymont, where it is likely to pick up a lot more Democratic voters.

That district had been held by Republicans for decades before Gay won an upset victory against former Sen. Cathy Cloutier, who was a Brandywine-area household name. It’s unlikely that seat will go back to the GOP any time soon if the draft maps are adopted.

In order to make that adjustment, Senate District 1, held by Democratic Sen. Sarah McBride, will lose a bit of ground but align more closely with population trends.

The House of Representatives is expected to release their draft maps imminently.