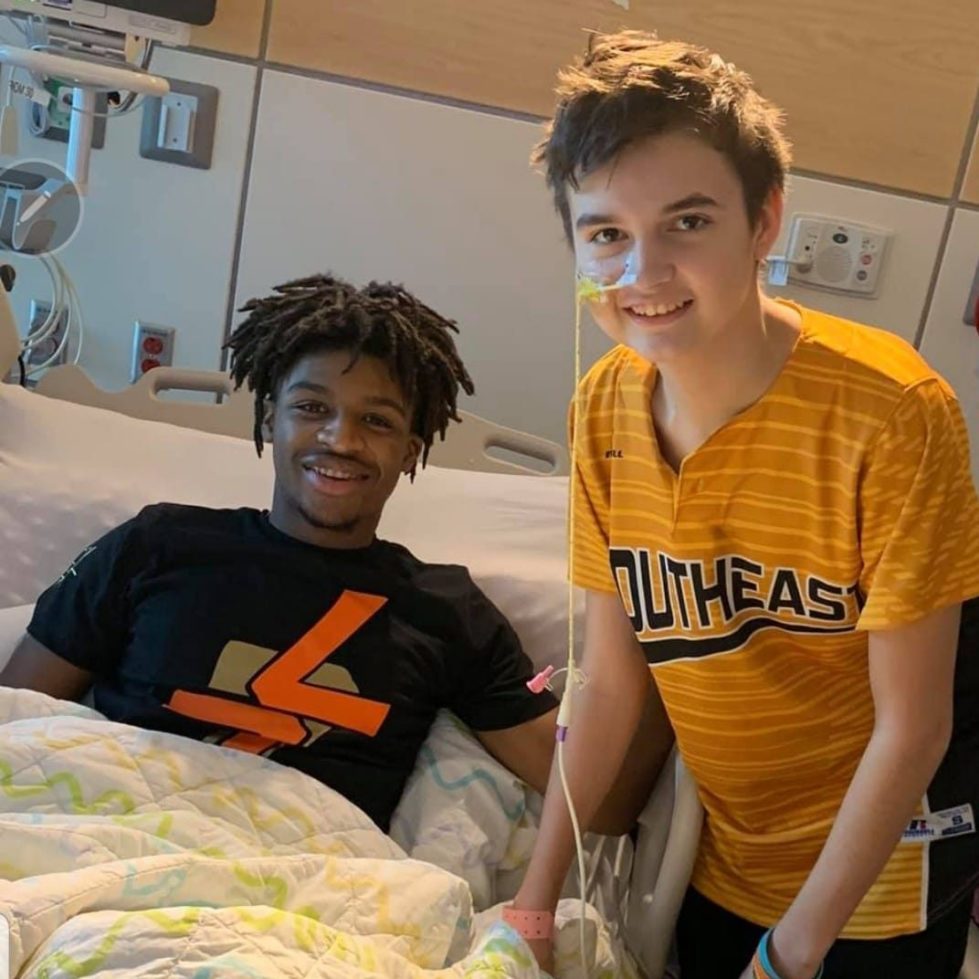 Seaford – At the start of the 2021 football season Seaford Blue Jay wide receiver and defensive back Cole Willey changed his jersey number to the number 4 to honor the memory of his friend the late Troy Haynes Jr.

Haynes wore the same number as an All-State quarterback at Woodbridge High School winning the Division II state championship in 2016 and 2018.

Willey’s friendship was not one of a former teammate or classmate since Haynes was five years older, it was a friendship born of two athletes battling childhood cancer at the same time. At the age of 14 Willey was an active two sport athlete participating in both football and wrestling at Seaford Middle School. In March of 2019 Willey was diagnosed with acute leukemia.

Undergoing chemo therapy, Willey would spend months at A.I. DuPont Children’s Hospital and that is where he would meet Haynes.

“I went to meet him when I heard he was in the same hospital, we really couldn’t get close because we were both sick and going through treatments. So I began texting with him because I knew the heartache and the thoughts he was having since I had been there,” Willey said.

Haynes passed away on September 29, 2019 of Renal Meduallary Carcinoma, just a week after his 19th birthday, but his memory is kept alive at a school just ten miles south of Woodbridge as each week Willey runs onto the field proudly wearing the number 4.

Willey said as he thought about Haynes passing from cancer he was inspired to wear number 4 for the Blue Jays.

“Troy was like a big inspiration for me, I texted him here and there when I could. When I heard he had passed it just hit me really hard. The inspiration behind the number and it’s a big deal in the State of Delaware,” Willey said.

Willey said that Haynes’ death drove him to keep fighting for Troy and his mother Christina.

“I had to beat it for him, I felt like I had to help Christina get through everything. I wanted to beat cancer for Troy,” Willey said.

The youngest of four children living in Seaford, Willey had just completed his eighth grade wrestling season finishing in second place in the 136 pound weight class at the Henlopen Conference Middle School Championships when he learned his life was about to change.

Diagnosed with cancer just months before he was about to begin high school Willey found himself hospitalized away from his Seaford home in Wilmington. His parents Coleman Sr, and Laralyn were by his side making the long trips between home and the hospital while Willey received treatments.

Willey said the relationship with Haynes helped him through the bad and tough times.

“There were some times when it was really bad, texting back and forth with Troy helped me get through the bad times. I actually wanted to go see him when he was in Texas when he was doing treatments and everything, but I never got the chance,” Willey said.

As his freshman year of high school arrived Willey said he really wanted to get back on the field and play even though he was sick because sports are really important to him so it was tough to have to miss an entire year.

“Physically I lost a lot of strength, but I knew I would get back into the gym as soon as I could. Mentally, I had to realize I was not the same athlete that I was before. I had to learn to be a different kind of athlete to contribute to the success of my team,” Willey said.

Having to go from being the quarterback on the football team and captain of the wrestling team in eighth grade to rebuilding his body and regaining his strength was really tough for him. Willey said he blocked out the negative and tried to focus on the positive as he began his comeback.

“I never focused on fear, obviously there were bad times going through the process. Honestly I just felt like I had to beat cancer,” Willey said.

It was his sophomore year that Willey was cleared to compete in football and wrestling. Now as a junior he is enjoying football more now than before. He is starter for the Blue Jays and heading into their final game of the regular season Willey glows when he talks about what the Seaford football team has accomplished so far this season.

With his cancer now in remission as of July of 2021, Willey no longer takes any medicine and has a clean bill of health.

“This is the best team I have ever played for, to bring Seaford back we are 6-2 looking to be 7-2 and back in the playoffs possibly with a home game and to be out there starting after beating cancer is just like the most amazing feeling. Representing 4 really puts everything together,” Willey said.

The Blue Jays will host Dickinson on Thursday night in their season finale. Seaford has already qualified for the Class A state tournament and await their opponent for the first round.

Willey says his journey and battle with cancer helps him to drive himself and his teammates each day.

“I have a chain with the number 4 and it has Troy on it and Fight Like Four, so I always look down at that chain for inspiration and it gives me the strength to do anything I can because he (Troy) was a strong guy. He was a warrior,” Willey said.