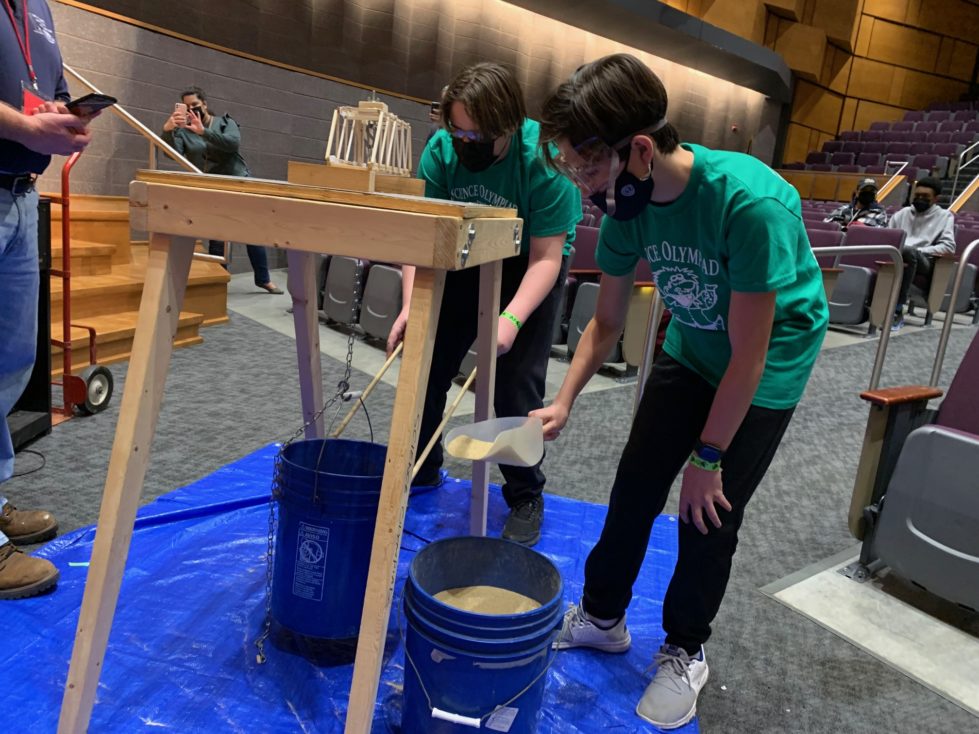 As Chase Martinez filled a bucket hanging from his balsa wood bridge with sand, the structure began making ominous popping sounds and he shoveled faster.

“I thought it was going to crack,” he said.

But, when time was called in the bridges event at the Delaware Science Olympiad Saturday, the bridge hadn’t collapsed before the six-minute deadline.

“That’s the first one I’ve had today that didn’t crack,” proctor Win Bookhart told Chase and his partner Joseph Mlodak.

The sixth- and seventh-graders from St. Mary Magdalene School were two of the 250 students from around Delaware taking part of the 2022 Science Olympiad construction competitions at Cab Calloway School of the Arts.

It was the first time since 2019 that the construction events could be moved indoors.

Held for years at Delaware State University in Dover, Science Olympiad was canceled in 2020 because of the COVID-19 pandemic. In 2021, the construction events were held outdoors where wind and the rough surface of parking lots challenged the builders.

This year, the knowledge tests were taken online and the construction events such as bridges, mousetrap vehicles, storm the castle, the Wright stuff, solar power, sounds of music, it’s about time and ping pong parachute were moved indoors.

Middle and high schools form teams of students who pick several events in which to participate. The contests not only given individual awards, but total points from schools to name school winners, too.

Some of the competitions require students to study fields such as cell biology or Delaware trees and take timed knowledge tests.

The construction events require students to build devices from scratch that must meet specific standards and perform in specific ways. While the bridges are tested for structural integrity, events such as gravity vehicles require them to stop at a precise point.

Chase and Joseph picked the bridges event because it seemed like fun.

“Once when I was in, like fourth or fifth grade, we built a bridge in class,” Chase said. “I really liked building it. So I just wanted to do it again.”

He and Joseph were surprised to be told by Bookhart that they had actually over-engineered their bridge. Bookhart pointed out several pieces on the bridge that he thought were redundant and made the bridge weigh more than it needed to.

It only had to hold until they hit 33 pounds in the bucket swinging from the bridge. While it’s admirable to get to 41 pounds, their ultimate score would have been higher with a lighter bridge.

Over in the gym, Tower Hill junior Ben Jordan and senior Ben Miao were tweaking their gravity vehicle to try to get their car as close as possible to the spot it was supposed to stop on.

Jordan has participated in Science Olympiad before.

“It’s a lot of fun because you are really pushing the limits on, like the accuracy thing,” he said. “It’s very easy to get close but it gets really hard to get super close.”

This is the first time Miao participated in Science Olympiad. He got involved, he said, because he took a physics class this year.

Cab junior Shay Wilson and senior Pinky Huang were two of the few young women competitors visible that day. They stood in the corner of the gym waiting for their chance to shoot off a rocket that contained a parachute anchored by a ping pong ball.

Huang thinks fewer women participate because there are fewer women in STEM classes and science fields. She plans to go into international business, but really likes science, she says.

Wilson plans to be a wildlife veterinarian.

She said she liked the experience of working with different materials, dealing with a topic she was unfamiliar with, and having to be able to adapt to perform.

State director Gordon Lipscy said Saturday’s events were expected to have 21 teams from 15 middle schools and 41 teams from about 30 schools.

That’s about half of the number participating before COVID and he hopes next year to begin building back to the one-day event for only middle and only high schools.

They all ended in a giant assembly in which winners were announced. The top 10 students in each contest walked to the stage to get medals, and schools could loudly celebrate their places in the overall rankings.

“I can’t wait to get back indoors and have medal ceremonies,” Lipscy said.