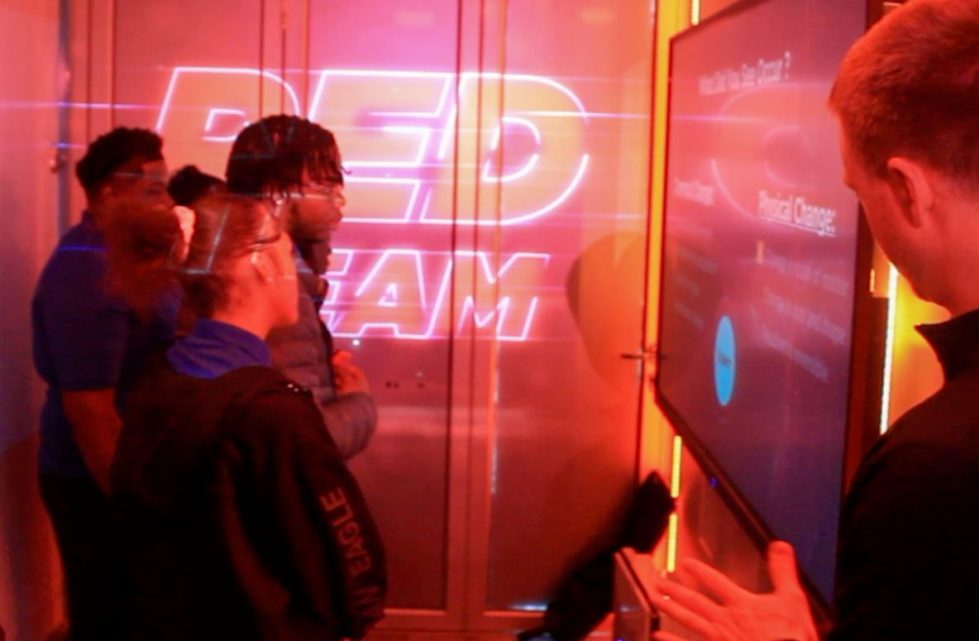 Teams compete in the Learning Undefeated Drop Anywhere Lab at the Warehouse to identify physical or chemical changes. Photo by Jarek Rutz.

Drones, video games and basketball all in one place.

That wasn’t just a middle school boy’s dream, but a day of STEM fun at The Warehouse in Wilmington.

Learning Undefeated’s Drop Anywhere Lab — a traveling science laboratory housed in a shipping container — was set up on the basketball courts.

It’s a big box: about 20-feet-by-5-feet, and it holds groups of about seven people.

When a group entered the box, the window’s blinds were pulled down, the room was pitch black and the action began.

The group broke up into teams designated red, blue and yellow. On three of the four walls, a projector displayed a game in which each group had to slap the projected button on the wall to answer the question: chemical change or physical change?

The screens might show a video of ice melting, butter browning or powder being mixed into a glass of water. A team had one minute to say if a chemical change or physical change was occurring.

At the same time, the teams were presented with a list of about 10 criteria that indicate a chemical or physical reaction.

Once the team selected an answer, a spokesperson would pop up in the video game to explain the correct answer.

The competition was capped off by a “speed round” during which the three groups had 15 seconds to answer the prompt. The teams took turns answering questions for about two minutes.

The students had a blast at the event, even if they aren’t – yet – interested in a STEM career.

“I love hands-on activities and as you interact with others while learning,” said ninth-grader Amaris Johnson. “The information really builds its way into your brain easier.”

“STEM isn’t my first choice,” said freshman Neasia Bailey. “But I think it’s important to learn and try new things and have different experiences, even if it’s not something I’m going to pursue in the future.”

11th-grader Aliyah Pattison isn’t sure what major she’ll pursue when she goes to college, but thinks it’s important to explore different fields.

“When you get to college it’s important to know all types of fields so when you meet people you have some background of what they’re learning,” she said.

DWS Drone School showed off its drones to alert students to its drone and virtual reality classes.

The lab is one of three that Learning Undefeated uses.

“It’s hands-on, but it’s something that they can’t get anywhere else in a classroom setting,” said Kristin Diamantides of Learning Undefeated. “We work with school districts and teachers to see how we can teach specific topics that students need help in.”

A basketball competition called the Market Access Shootout that was meant to teach students how to get products to the market.

Layups were worth 20% of market access, free throws were 40% and three-pointers were 80%.

“It’s supposed to demonstrate when you release new products, you have to get the market coverage and try to get it to three different levels – local, regional and global,” said Jessica Bitondo, quality assurance investigator at AstraZeneca, which sponsored the event.

At another station, DWS Drone School set up shop to inform students about their piloting school and its scholarships.

Visitors could see drones, handmade and manufactured, being flown.

The drones are legally limited to flying 400 feet above their takeoff point, but most drones today can reach at least 1,000 feet of altitude and are well equipped to handle inclement climates, according to Edwina Bell, director of teen engagement at the school.

She said that her school offers flying lessons as well as training in operating and using virtual reality machines.

“We know that virtual reality and drones are becoming more popular, and there’s a severe shortage of people who know how to operate drones or virtual reality,” she said.

A construction station got hands moving as people competed to build a structure out of 10 gum dots and 12 toothpicks that could hold the weight of 20 children’s books for at least five seconds.

There were no limitations to how wide the structures should be, but they had to be at least a toothpick tall.

Students tried their hands at building a support for school books out of gumdrops and toothpicks.

Only one student was able to successfully hold the weight in the first two hours of the event.

In a giant Jenga game, students first would roll a giant die. The number they landed on was the number of blocks they had to take out of the wooden structure.

The game is designed to force students to think critically while keeping the laws of gravity and physics at the forefront of their decision-making,  said Jessica Jordan of The Carlin Collaborative, a project management company.

It’s the way a construction project manager has to think, she said.

“There are always unforeseen obstacles in the way of getting a project completed, and the project manager is responsible for making it all work,” she said.

Learning Undefeated typically puts on about nine of these events every year, said Janeé Pelletier, vice president of communications and events for the nonprofit.

“It’s really important to us to show students that STEM is fun,” she said. “There are fantastic STEM jobs for these kids here in Delaware and our job is to make them aware of all the great, high-paying opportunities for them in their own backyard.”