Salesianum celebrates after their victory over Sussex Central

Conor Campbell threw five touchdown passes as the new-look offense and a suffocating defense led Salesianum to a 42-13 victory over Sussex Central on Friday night at Abessinio Stadium. With the win, the Sals improved to 2-0.

The defending state champion Golden Knights – who posted a shutout win in week 0 – struggled to get their offense untracked in the face of an unrelenting Sallies defense. Central was forced to punt several times from deep in its own territory, giving the Sals offensive opportunities they would not waste. 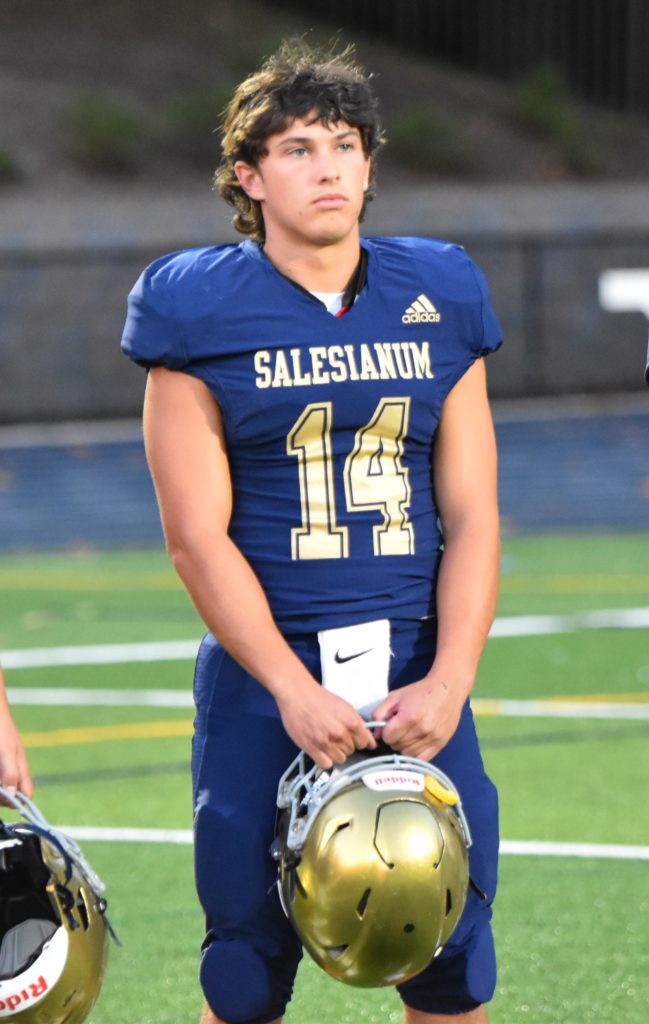 Campbell and Micah Wing connected with three and a half minutes to go in the first on a 20-yard go route, and Wing went untouched into the end zone. He wasn’t done scoring, however, as he was credited with a sack of Central quarterback Zimir Gardner in the end zone late in the first for a safety that added two points to the Salesianum lead.

After the free kick, the Sals struck again, needing just one play. Campbell found Nate Ray in stride over the middle, and Ray ran the ball the last 30 yards for a 45-yard score. The extra point was no good, and the Sals led, 15-0 after one.

Kristopher Shields scored on a nine-yard rush on the first play of the second quarter, but the Golden Knights just couldn’t make enough stops on the Sals’ offense. A Central punt midway through the second gave the Sals’ possession on the Knights’ 39, and Campbell connected with Sam Dumas on first down for a touchdown. In the final minute of the half, Cooper Brown scored the home team’s lone rushing touchdown of the night for a 28-6 halftime lead.

The Sals’ defense continued to live in the Sussex Central backfield throughout the second half, although the Golden Knights did strike once. Trazmeer Willis caught a 10-yard touchdown pass from Gardner halfway through the third.

But the Sals would score twice in the second half, both on big plays. Wing caught a ball in stride and took it in from 51 yards late in the third, and Dumas caught his second TD pass early in the fourth for the final margin.

The Sals will host St. Georges Tech on Friday at 7 p.m. at Abessinio Stadium, while Sussex Central (1-1) will travel to Hodgson on Saturday for a noon kickoff.

Firefly fans start to flow through gates about 7:30 p.m.
A special chance to get (maybe subsidized) health insurance
DIAA lacked quorum for mask vote, but approves new football playoff structure
Here's where to find pop-up testing the week of Jan.3