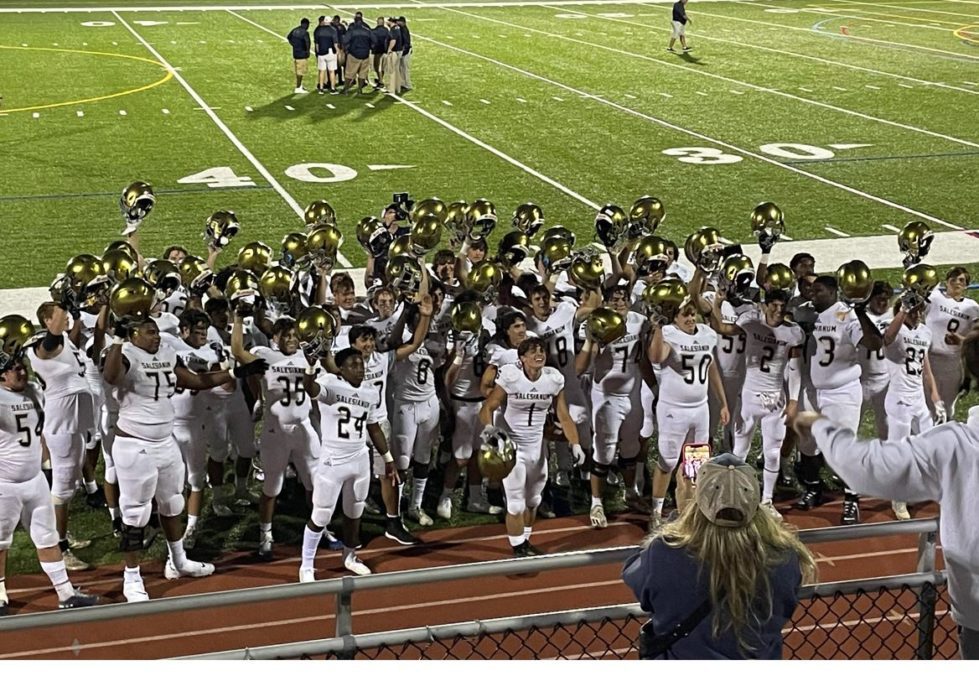 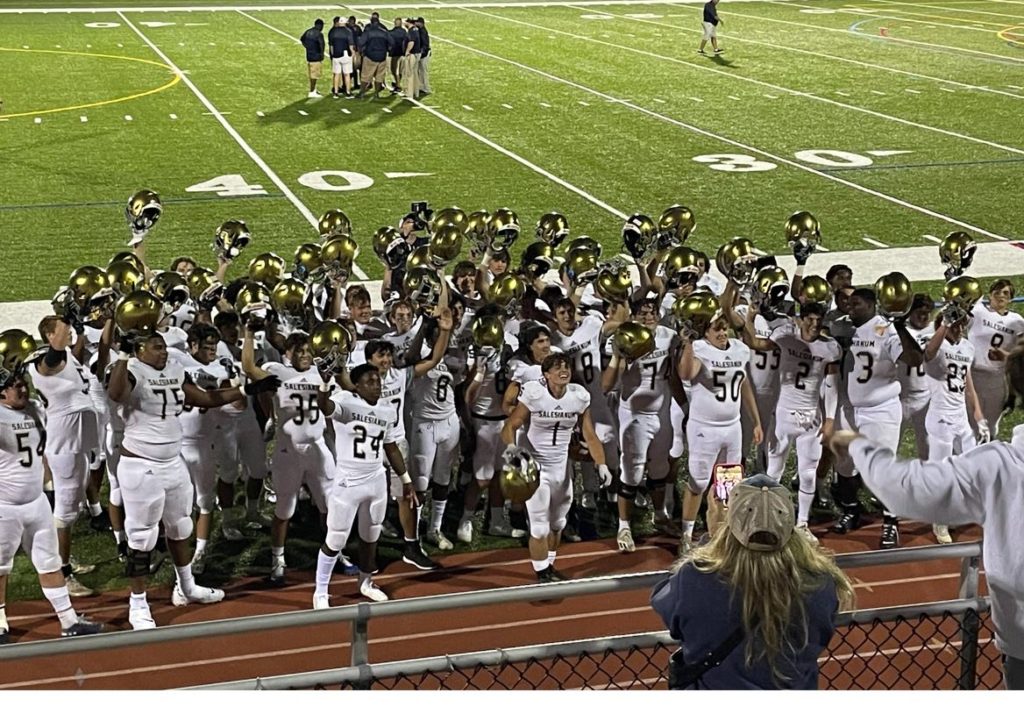 Salesianum School won its first football game of the season.

Lewes – Salesianum School made its first trip to Cape Henlopen High School in 29 years Thursday night,  jumping out to a 28-6 halftime lead and then hung on for a 28-20 victory.

Conor Campbell got his first start at quarterback for Salesianum in their new-look, mostly shotgun spread formation offense.

“We have a lot of changes this year,” said  Salesianum Head Coach Bill DiNardo. “We’re running more spread more open look and trying to use some of the skill that we have. I thought our kids did a great job as well as our offensive coordinator Scott Cook.”

Campbell rushed for 54 yards with a touchdown and threw for 55 yards and a pair of touchdowns on the night.

“This win was huge, we knew Cape was going to be a good team coming in and they were really good, but we found a way to win together,” Campbell said.

The Sals put the first scoring drive of the game together midway through the first quarter,  taking over at the Cape 41-yard line after the Vikings’ fourth down conversion failed.

A pass interference penalty put the ball at the Cape 25-yard line. The Sals mixed some runs with a Campbell pass to Lukas Ryan to advance to inside the two-yard line. Cooper Brown ended the drive with a one-yard run. James Collins added the extra point and Salesianum took a 7-0 lead with 4:05 left in the first quarter.

Late in the first quarter the Salesianum defense held the Vikings again, taking over at midfield. The Sals went on a six-play, 51-yard scoring drive capped off by two-yard touchdown run by Campbell. Collins converted the extra point and Salesianum led 14-0 with 11:56 to play in the first half.

Cape Henlopen responded with a kick return to the Sals 41-yard line by Chancler Johnson. The Vikings offense sputtered in the drive they faced a third and 24 when a Sals defender was penalized for targeting, keeping the Cape drive alive.

Three plays later Thomas Messick took a pitch around left end breaking two tackles on his way to a 17-yard touchdown run. The Vikings were unable to handle the snap on the PAT and the attempt failed leaving Salesianum with a 14-6 lead with 8:29 to play in the first half.

Salesianum would add two more scores before the end of the first half with Campbell connecting with Ryan Rzucidlo on a 14-yard pass. Later, Campbell used his feet on a 26-yard scramble racing to the right corner of the end zone, giving Salesianum a 28-6 lead at halftime.

After a scoreless third quarter, the Vikings came alive scoring twice in the fourth quarter.

On the ensuing kickoff the Vikings special teams forced a fumble, giving Cape Henlopen the ball at the Sals 15-yard line. On the first play of the series, quarterback Hank D’Ambrogi scrambled up the middle for a 15-yard touchdown run. Barnes converted on the conversion run closing the score to 28-20 with 7:48 left in the game.

Cape Henlopen forced Salesianum to punt on the ensuing possession with 4:28 left in the game. Sals punter Aiden Montgomery booted a beauty, dropping the punt inside the Cape Henlopen 20 to the 13-yard line.

Jaiden Mason sealed the victory with an interception.

“The first half we showed a great deal of balance,” DiNardo said. “I was a little disappointed in the second half. We got beat up, we were cramping, we were on our fifth running back for goodness sake, but overall I thought we did a good job.”

Cape Henlopen drops to 0-1 and will travel to Woodbridge next Friday night. Salesianum moves to 1-0 and will host defending state champion Sussex Central Friday.