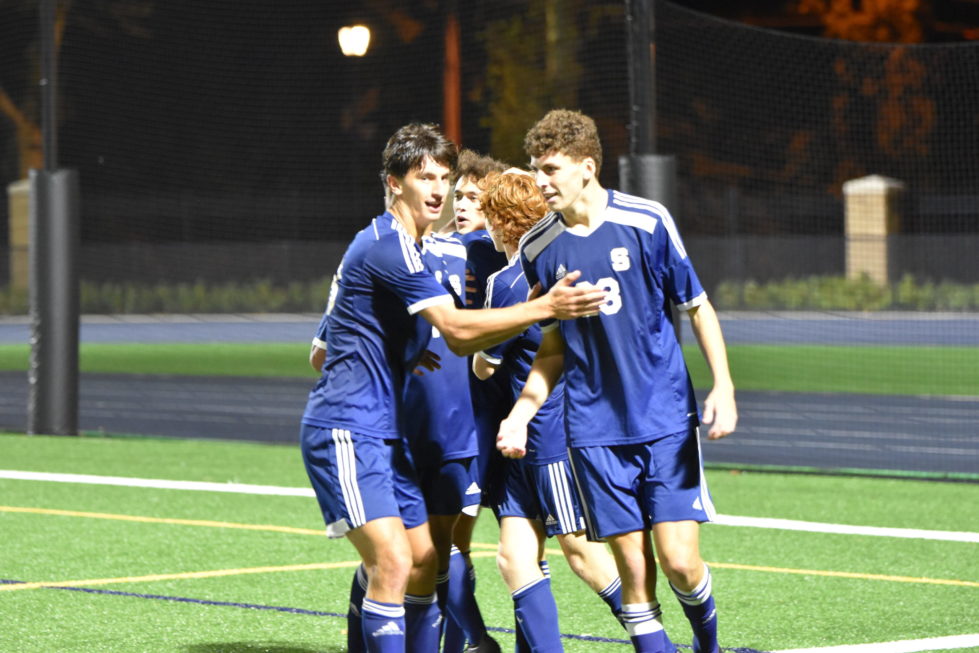 The Appoquinimink Jaguars Boys’ soccer team visited Abessinio Stadium Saturday night for a rematch of last season’s division one state finals. The Jags won the state title last year after beating Salesianum on penalty kicks to earn their first boys’ soccer state title. The Appo soccer team came into the night’s match up having played only 2 matches resulting in a 1 win and 1 loss while Sallies came in with a 4-1 record. The first two minutes of the game, the Jags dominated possession moving left to right and right to left but were unable to secure any real type of scoring chance. Once Sallies gained possession, they immediately targeted Sallies forward Jake Ross who made a nice move through the Jag defenders. After a few deflections, the ball landed at Noah Holgado’s feet. Holgado blasted a right footed shot from 25 yards out which knuckled right through the Appo keeper’s hands, giving Sallies an early 1-0 lead. Five minutes later Ross would strike again as he found himself with the ball at his feet about 10 yards away from the goal. Ross would take a right footed shot that would ricochet off an Appo defender and go right past the keeper for Sallies’ 2 goal of the game in the first 7 minutes of the match.

Sallies patience on the attack was evident as the half continued. Their willingness to play the ball back and side to side as they maintained possession eventually would lead to yet another Jake Ross goal. #23 for Sallies found himself with the ball about 20 yards out and would actually take it even deeper in the corner giving himself a more difficult angle for a shot. The angle proved to be no problem for the Sallies striker as he placed a right footed shot past the right side of the Appo keeper and inside netting for his second goal of the game putting Sallies up 3-0 at the 22 minute mark of the half. Sallies 3rd goal would prompt a goalkeeper change for the Jags as the freshman Riley Buzby took over in goal for the rest of the contest.

The Jags would subsequently go on the attack for the remainder of the half. Despite being down by 3 goals they continued to push forward and would create scoring opportunities of their own. Their first breakthrough came with 2 minutes to go in the half as a Jag player was fouled just outside the penalty box giving the Jags a free kick at the top of the 18 yard box. #5 for Appo, Thomas Hastings, would send the free kick into the right corner of the Sallies net past the keeper giving the defending champs their first goal of the game. Halftime score 3-1 Salesianum.

Appoquinimink’s intensity level at the end of the first half looked to be a good sign for the Jags but they were unable to carry any of that momentum into the 2nd half. After some forward pressure by the Jags in the opening minutes a through ball was played up the middle of the field to Jake Ross on Sallies first real offensive possession and Ross would not disappoint taking a shot from about 15 yards out with his left foot just as the Appo keeper came out to cut the angle. The Appo keeper was unable to get a touch on the ball as it rolled into the back of the net giving Ross his third goal of the game and Sallies a 4-1 lead. The Jaguars never showed signs of giving up but Sallies was just too much on this night. Sallies would score again with 22 minutes left to go as midfielder Reese Peddrick would lay a ball off  for Noah Holgado just inside the 18 yard box. Holgado sent a right footed blast through the crowd and into the back of the net giving the Jaguar keeper no time to react. The match would end with Sallies winning 5-1. The Jaguars drop to 1-2 while Sallies improves to 5-1 with a showdown looming with St. Benedict’s Prep next Saturday night.