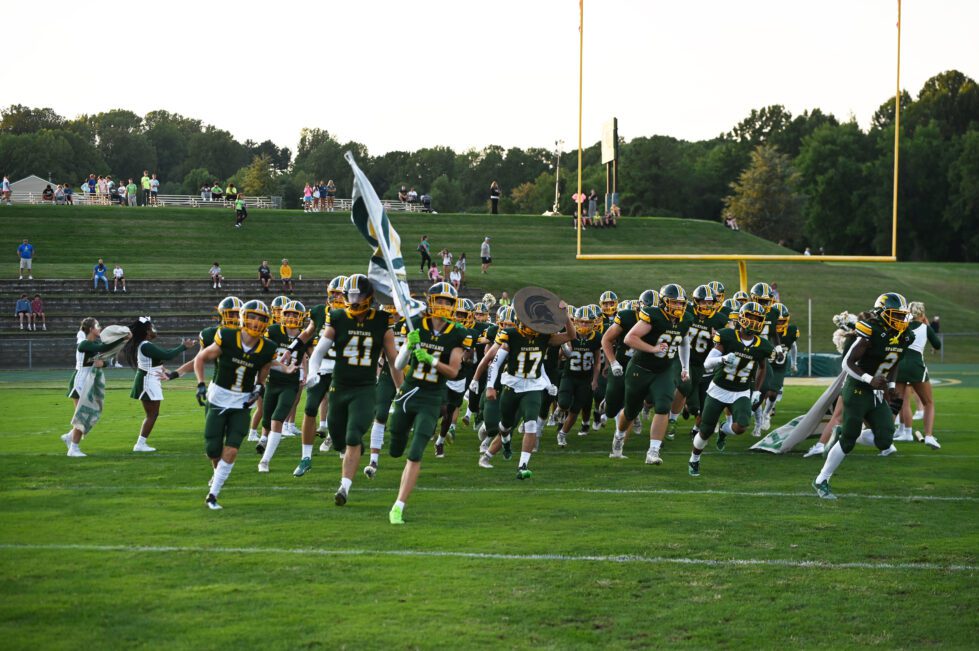 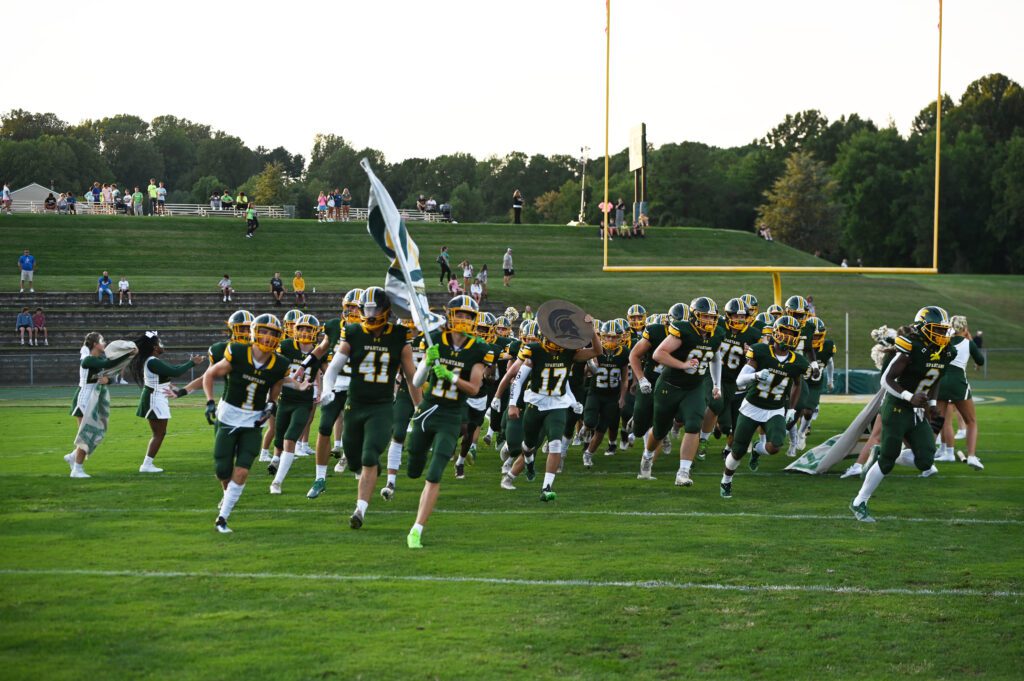 Saint Marks football team running out on the field, photo by Nick Halliday

The parking lots were filled, the crowd was at capacity, and much to the delight of the home fans, the Spartans delivered an impressive 48-0 win over Red Lion Christian Academy in a class 2A game.

Last year these two teams were separated by a single point in a game not decided until late in the 4th quarter. This time St. Marks served notice early, scoring on each of its first 3 possessions on runs of 35 yards and 12 yards by Donovan Artis and an 8 yard run from  T-J Martin. The Spartans enjoyed great field position on the second drive of the opening quarter at the Lions’ 22 yard line and converted a 4th and 14 to set up Martin’s TD. Defensively, All State lineman Luke Watson, Aidan Zellman and Jake O’Donoghue pressured Lion QB Evan Buddinger and throttled the run-game to gain a 21-0 lead after one.

The two defenses dominated the 2nd quarter after Matt Hanich scored at the 11:14 mark to give the Spartans four TD’s on four consecutive drives. That touchdown was set up by the defense as T-J Martin blitzed off the corner, deflected a pass, and Mas Paoli returned the “pick” 43 yards to the 2 yard line.

Red Lion would answer on a drive that featured some nice pass plays from freshman Buttinger to Seth McGroerty for 17 yards, Kyle Manley for 40 yards and a 21-yard reception by Jacque Wilson to the Spartan 24, but the drive stalled and Sam Crossan was called on to attempt a 47-yard field goal. His kick came up a little short and the Lions came away empty on their best scoring opportunity of the night. The first half came to a close with St. Marks leading 28-0.

Early in the 3rd quarter, Chase Patalano connected with Tahj Johnson on a 50-yard score. At that point, Patalano had 157 yards passing as he gave way to sophomore James Campbell, who was the “signal caller” the remainder of the game. Campbell found Logan Klein for an 8 yard score to put the Spartans up 41-0, starting the running-clock with 5:45 to go in the third quarter. Keigan Barnes completed the scoring on a 1-yard run to make the final 48-0.

The Delaware Live – 302 Sports player of the game was Jake O’Donoghue who recorded 6 sacks and caught a pass for 5 yards. As a team, the Spartans sacked Buttinger 8 times and flushed him from the pocket on several occasions. The Lions freshman QB showed exceptional poise under fire and passed for 100 yards in the contest. His future looks bright. As for the Saint Marks defense, what a performance! The unit limited Red Lion to 5 yards net rushing, excluding the yards lost via sacks, plus intercepted 3 passes.

Saint Marks gained nearly 200 yards in the win. Artis led the rushing attack with over 60 yards and 2 touchdowns. The Spartans improved to 2-0 and will travel to Woodbridge on the 16th. Red Lion (0-1) will host Delmar (0-1) in its home opener, also on the 16th.