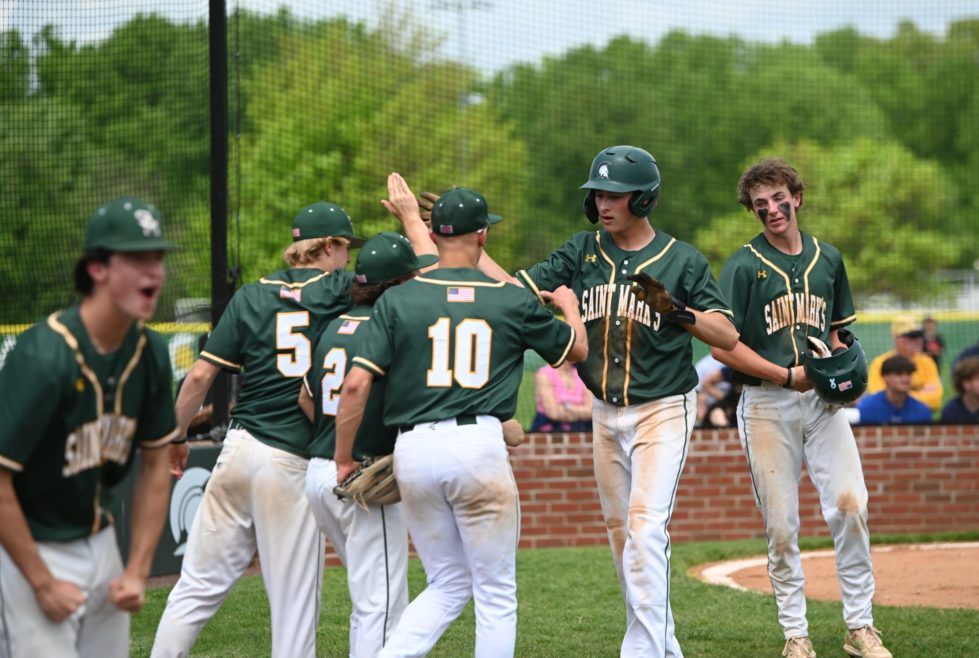 Saint Mark’s baseball was able to edge Salesianum in a high scoring affair. The game was originally scheduled on May 4th, but had been postponed twice. Salesianum won the game they faced each other earlier in the season at Salesianum 7-4 which had Spartans looking for revenge.

The Sals got on the board first in the top of the second inning scoring four runs. Brandon Baffone and Ryan Rzucidlo left off the inning with back to back singles. Saint Mark’s starting pitcher Garrett Quinn walked the next batter to load the bases. With the bases loaded, he hit the next batter then walked the following batter forcing two runners to cross the plate.  After the walk Ryan James  hit a line drive single to center field driving in two more runs for 4-0 lead.

The Spartans answered right back in the bottom of the second scoring three runs of their own. Hayden Fauerbach reached safely after being hit by a pitch from Salesianum Starter  Zach Czarknecki. Sallies then committed two errors in a row, which Fauerbach was able to cross home plate safely, scoring the first run for the Spartans. With two outs in the inning James Baffone crushed a ball to center field that resulted in a double driving in two runs to make the score 4-3.

Salesainum added another run in the top of the third on an RBI single by Rzucidlo. However the Spartans wouldn’t go away. Tyler Satterfield hit a lead off single followed by a double by Kyle Reader putting runners on second and third base. Satterfield was able to score on an error, while Reader was knocked in on an RBI single by Fauerbach to tie the game at 5-5.

Saint Mark’s was able to keep Salesianum off the board in the top of the fourth inning. The Spartans however kept things rolling. They scored another run to take their first lead of the game. Czarnecki surrendered a hit to Wenger followed by two walks which loaded the bases for the Spartans. Wenger was knocked in on a sacrifice fly by Tyler Satterfield giving the Spartans a 6-5 lead.

Saint Mark’s did not hold on to that lead for too long. Rzucidlo reached on a walk to start the fifth inning off. Nate McBride laid down a bunt to sacrifice Rzucidlo over, but was able to reach base safely. Quinn Bartkowski again laid down a sacrifice bunt, but was able to reach safely as Rzucidlo scored on the fielder’s choice. Czarnecki helped himself out with a sacrifice fly that scored McBride. John Dunion capped off the three run inning with an RBI single that scored Bartkowski as Salesianum regained the lead 8-6.

Saint Mark’s added a run in the bottom of the fifth bringing the score to 8-7. Heading into the seventh inning Salesianum led by one run, but was looking for an insurance run to give them a two run cushion. Aiden Tesche delivered for the Sals. Tesche crushed a ball to left field as he slid in safely at second for a double. He was eventually sacrificed in to give Salesianum a 9-7 lead heading into the bottom of the seventh.

Sallies seemed confident that the 2 run lead would give them a good chance to come into Saint Mark’s and walk away with the victory. However, that lead was not enough. Saint Mark’s fought back all game every time they were down. In the bottom of the seventh with their backs against the wall that didn’t change.

Zach Frame led off the inning as he got things started with a single. After that hit Saint Mark’s just watched as the Sallies pitching unfolded. They hit two batters and walked the other three batters pushing the winning runs across the plate. Saint Mark’s completed the comeback victory getting three runs in the inning for the 10-9 victory.

Neither team’s starter factored into the victory as each team needed to go to their bullpens. Steven Mann got the victory for the Spartans throwing two innings allowing one hit while striking out one.