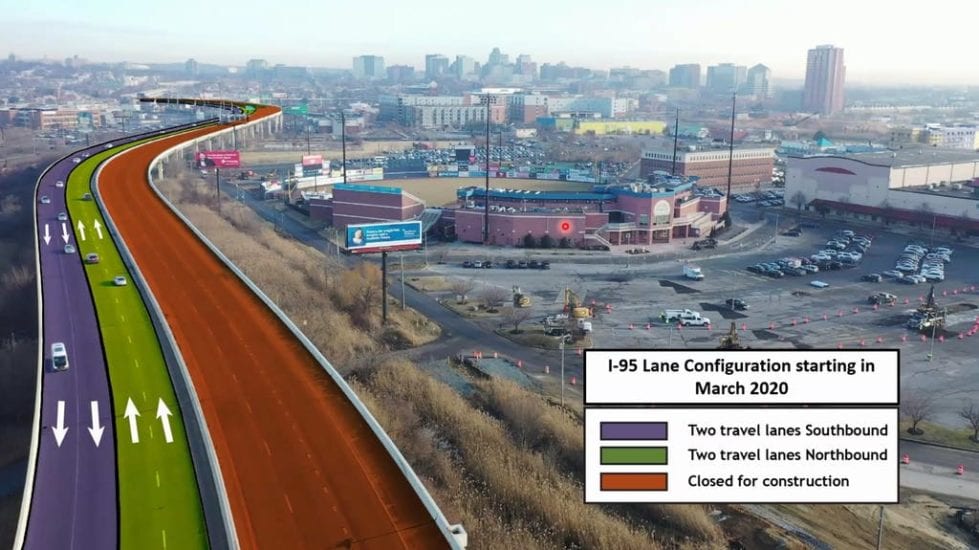 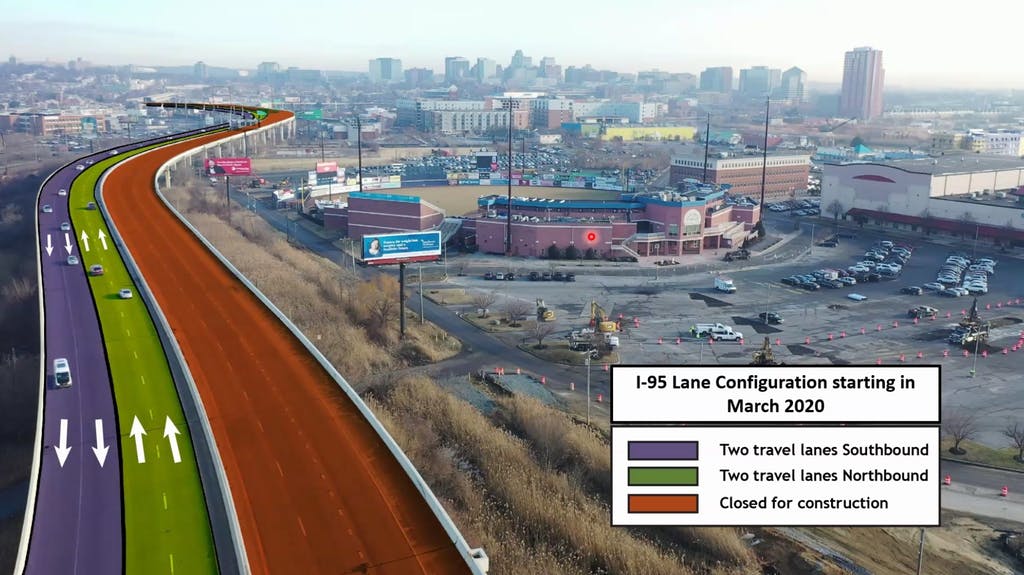 How Restore the Corridor will start. (DelDOT image)

After years of planning, the $200 million project to revamp Interstate 95 in Wilmington begins Feb. 12 with safety measures. Actual construction is due to start March 1.

The project – two years of significant closures downtown and three years to wrap it all up on five miles of roadways, 19 bridges and 11 on- and off-ramps – involves multiple efforts to reduce congestion, including changes on buses and trains and being on top of traffic when President Biden is in town.

That was the news from a virtual Delaware Department of Transportation public hearing Thursday that drew more 400 participants.

Lane closures start Feb. 12 when a contractor installs new lane stripes, guide signs and safety barriers. Those safety measures will take the whole weekend, including nighttime closures that weekend on I-95 south to remove signs that span the width of the road.

“We’re going to repair everything in that corridor, including all the on- and off-ramps into Wilmington,” said Bill Geschrei, a project manager from Whitman, Requardt and Associates.

The work is intended to keep I-95 rolling for 30 years, and in many ways more safely.

To reduce the impact on drivers, “the department has worked hard over the past few years to complete dozens of projects in and around the city,” said C.R. McLeod, DelDOT’s director of community relations.

That said, work on the Route 141/I-95 interchange – Delaware’s busiest – still has another year to be completed, he said. The 141 project also extends onto surface streets. 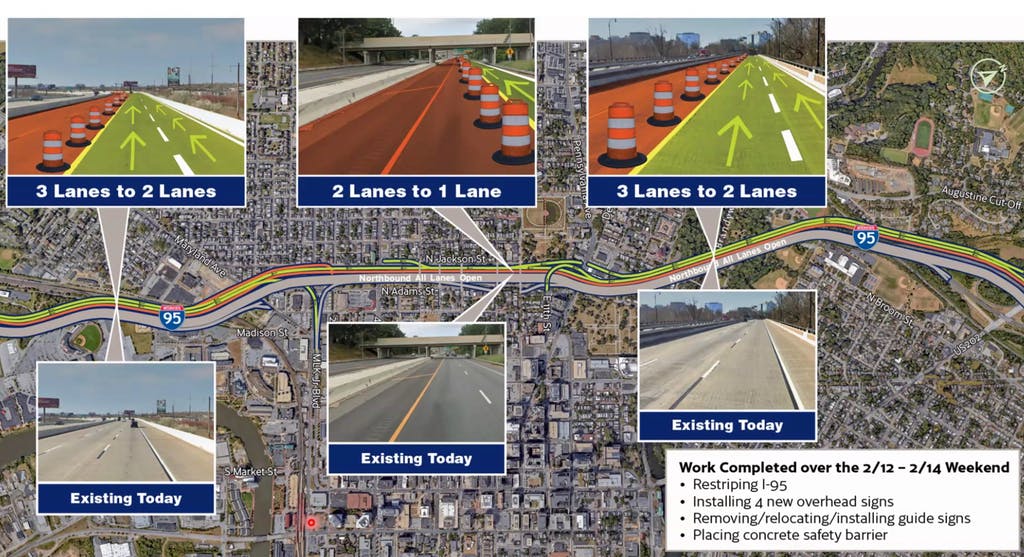 Work planned in mid-February for Restore the Corridor. (DelDOT image)

McLeod said that White House is well aware of Restore the Corridor, and multiple agencies will be involved in routing motorcades to the Riverfront, the Queen, Biden’s Greenville home and other Delaware spots he’s known to frequent.

The project is using various types of technology and some under-the-radar actions to make the work run smoother for consumers.

Donnie Arant of Kiewit Infrastructure said the company intends to meet or beat the project schedule.

Route 5 will use Fourth Street to and from the Wilmington Transit Center.

Route 11 will have reduced rush-hour trips and increased midday trips, with short-turn at Matson Run.

Route 14 will serve Dunleith, the Delaware Health and Social Services Hospital and Baylor Women’s Correctional Institution on all trips. Cherry Lane, Probation and Parole, Lukens Drive, Riveredge Industrial Park and Steel Drive will be served by the Route 28 extension.

Route 40 will use Route 13 to serve Christiana Mall.

Routes 54 and 55 will not go to Wilmington from Christiana Mall.

SEPTA on Jan. 24 restored service to the Fairplay and Newark stations, said Kathleen Grier, of Delaware Commute Solutions. “Train will be the FASTEST option,” her PowerPoint slide said. SEPTA has also service from Wilmington, she said.

What you want to know

Questions raised during the session covered many aspects of the project.

Officials have suggested staggered schedules to downtown businesses and encouraged working from home, but they did not report any businesses saying that they’re changing.

DelDOT hopes that more traffic enters and exits the city from I-495 and Route 13 but anticipates other roads to be popular, such as Concord Pike/Avenue, leading to Baynard Boulevard.

DelDOT has taken over control of 200 traffic signals in the city, and retiming those signals when needed could improve flow.

“We are pushing people to use the main alternative routes,” said Neil Leary of Whitman, Requardt and Associates, referring to I-495 and Route 13. “495 has excess capacity.”

During construction, tow trucks will be on-site during morning and evening rush (6-9 a.m. and 3-6 p.m.) and on-call at other times, Leary said. Safety barriers to handle contraflow traffic will have gaps that can be used by first responders. Playbooks have also been developed to handle shooting victims.

When asked why this project is starting in mid-winter, the answer was that this start time allows for other stages that rely on warmer weather – such as hydro-demolition and asphalt installation – to occur in warmer weather.

DelDOT already has a relationship with Waze, McLeod said, and it’s alerted Apple about the project, so their digital maps will be updated.

For the latest on Restore the Corridor, there’s a website, an app, a guide for getting around and at least one more outreach meeting, in February. Consumers can also reach out by texting #77.