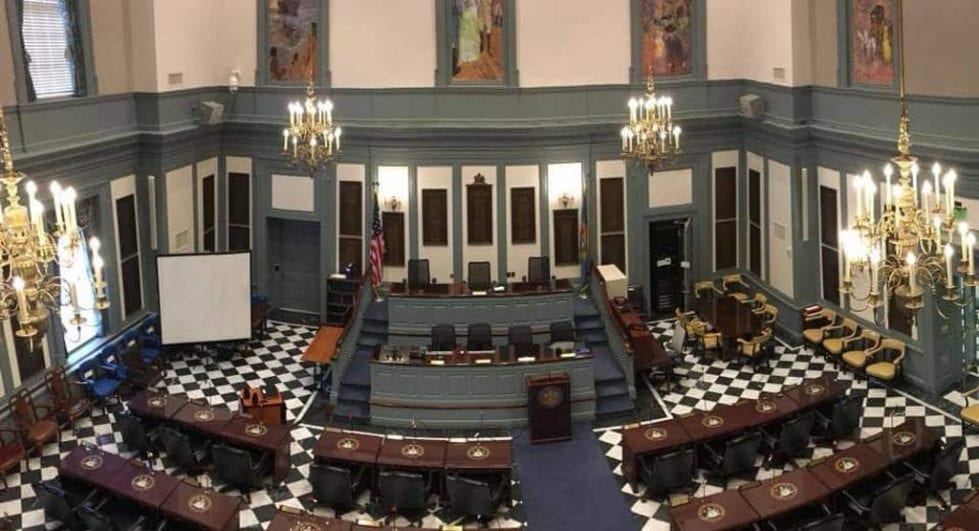 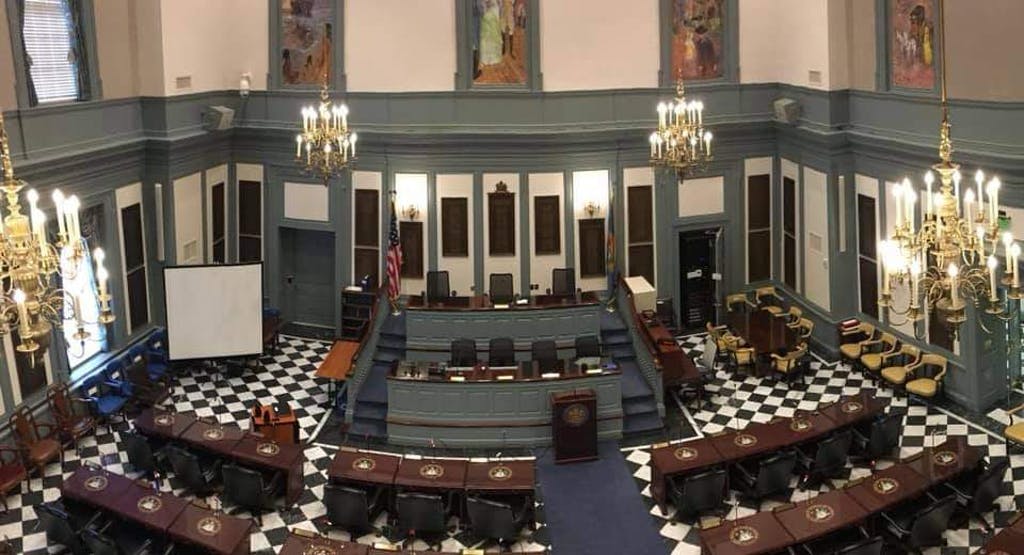 Republican legislators want a return now to Legislative Hall instead of virtual meetings.

Republicans in the Delaware General Assembly are calling for a return to in-person sessions and committee hearings.

They cite last week’s contentious Senate committee hearings on two gun bills as a reason to allow face-to-face interactions and say because COVID-19 vaccination rates are rising, in-person meetings could be done safely.

It has been more than a year since the General Assembly stopped meeting at Legislative Hall in Dover to help curtail the spread of COVID-19, and state statistics say 35% of Delawareans have at least one vaccine shot, the Republicans point out.

“I found that meeting to be disturbing,” said State Senate Minority Whip Brian Pettyjohn, R-Georgetown, in a press release. He sits on the committee.

“Citizens testifying before us were given one-minute to provide testimony, were often cut off in mid-sentence, and were not allowed to engage members of the committee.  Proponents of virtual meetings say they allow greater transparency and participation,” he said. “That’s not without merit, yet the dark flipside of virtual meetings is that they allow legislators to wield more control.”

He said the virtual meetings allow the General Assembly to keep citizens at arm’s length and distance themselves from emotional testimony that could not be denied were they in the same room.

“As it is, committee chairs don’t even have to look at citizens because they have the option of cutting off their video feed.” he said. “Virtual meetings facilitate the discourteous treatment of citizens.  That is unacceptable at any time, but even more so when there is no reason we cannot meet in-person.”

The Senate’s Democratic leadership — President Pro Tempore Dave Sokola, D-Newark, Majority Leader Bryan Townsend, D-Bear/Newark and Majority Whip Elizabeth “Tizzy” Lockman, D-Wilmington — said in a press release that they too are all eager to return to in-person meetings in Legislative Hall when it is safe to do so.

The legislature is currently on its Easter Break and will return to session April 20. This year’s session ends June 30.

The Republicans said that Delaware’s work to safeguard the public from COVID-19 has meant that 177,694 people have been fully vaccinated, while another 160,985 people have partial protection from a first dose of a two-shot vaccine.  In addition, nearly 91,000 Delawareans have some acquired immunity because they’ve had the virus.

State House Minority Whip Tim Dukes, R-Laurel, said the time has come for lawmakers to return, especially as those 16 years old and older can now sign up for and receive vaccines.

“It seems appropriate for the legislature to set a hard date to again meet where the members of the public can witness our proceedings and impact the process by testifying and meeting with their elected officials,” Duke said in the press release.

The General Assembly now is majority Democratic and the Senate has a supermajority, meaning Democrats can vote through legislation there without a single Republican vote. There has been bipartisan legislation that members of both parties have helped pass, and one measure introduced by a Democrat — a personal income tax hike by Rep. John Kowalko, D-Newark, failed. But by and large, the Democrats can have their way with legislation.

State Senate Minority Leader Gerald Hocker, R-Ocean View, pointed out that House and Senate Republicans had asked for contentious legislation to be set aside until citizens could attend face-to-face meetings.

“That lasted only a few weeks before Senate Democrats started seeing the current situation as a prime opportunity to fast-track their Progressive agenda,” he said. “They already passed the $15 an hour minimum wage hike, and two major gun rights infringement bills though our chamber, with more on the horizon.  I think Democrats see virtual meetings as an ideal environment in which they can limit and control citizen participation as they pass one contentious bill after another.”

“There are large meeting spaces in and around Dover that can accommodate the House and Senate committee meetings and floor action, allowing that public to participate, while observing social distancing, mask-wearing, and other prudent practices,” he said. “The ballrooms at Dover Downs would be perfect for this, but there are other large indoor spaces that could equally be put to use.”

“There is no health-related, technical, or logistical barrier to meeting in-person that cannot be addressed and overcome in the next few weeks,” Pettyjohn said.  “If we do not set a hard date to resume action, I believe it will be due to reasons that have nothing to do with public safety and everything to do with controlling public debate.”

Sokola, Townsend and Lockman said the Republican suggestions “that we cannot or should not continue our work before that happens flies in the face of what Delawareans demanded at the ballot box last fall.”

Their press release said Delawareans have been asked to make dramatic changes in how they conduct business, and they’ve adapted time and again.

“They deserve the same nimbleness from their elected representatives,” the press release said.

“Our virtual legislative session has resulted in unprecedented public involvement as evidenced by last week’s Senate Judiciary Committee, which may have been the most well-attended committee meeting in the history of the Delaware General Assembly,” the press release said. “More than 800 people were able to attend that meeting – four times the fire code occupancy limit of the largest room in Legislative Hall.

“Public comment was strictly held to one minute per person for people on both sides of the debate, specifically so we could hear from as many people as possible.”

Thousands of people also communicated with legislators on gun safety issues by email, by telephone and in person over the last several years, the release said.

“Each and every one of those Delawareans had a chance to participate in the legislative process without anyone having their health or safety put at risk by someone who refuses to admit COVID-19 is real, refuses to be vaccinated, or refuses to take the most basic precaution to protect themselves and their neighbors,” the release said.

In a separate press release issued after 5:30 p.m., House Speaker Pete Schwartzkopf, D-Rehoboth, and House Majority Leader Valerie Longhurst, D-Bear  said they Short and Dukes had thanked them March 29 on tentative plans for a phased-in return to in-person legislative session this year.

“In public, they try to score political deals and claim they’re being railroaded,” the release said.

“It’s especially frustrating because they know they can call us anytime and discuss concerns they have rather than sending statements to the media. “

Their release said that less than 20 percent of Delawareans have been fully vaccinated and that they will continue to follow the science to protect staff, lawmakers and the public.