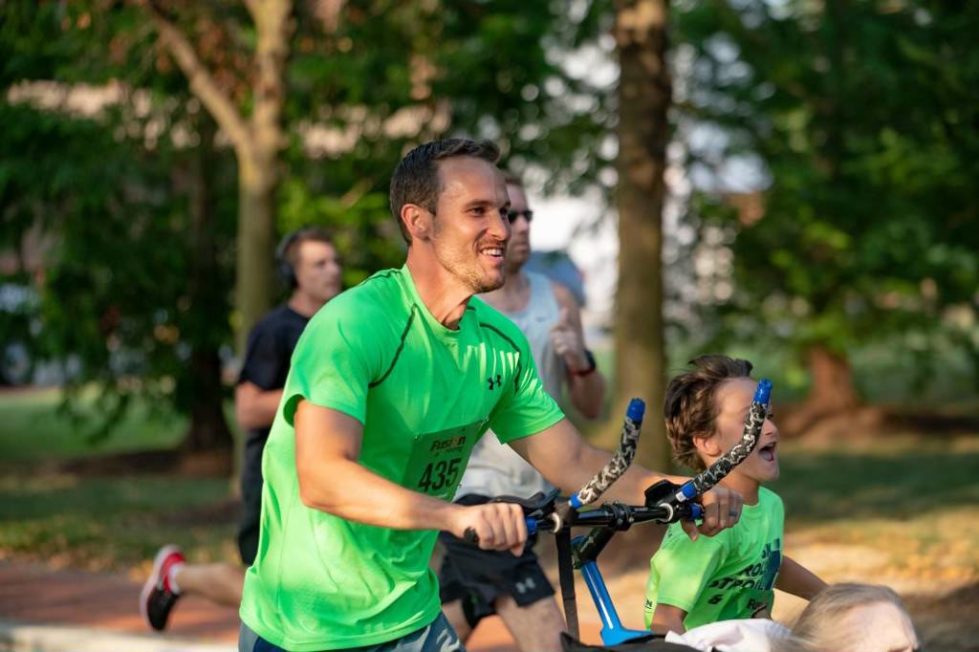 A Delaware state representative will run 48 miles in 48 hours to raise awareness and money for veterans.

Starting at noon Friday, Rep. Mike Smith, a Republican from Pike Creek, will run four miles every four hours for two days alongside his friend Dave Henninger. The challenge will end Sunday at noon.

They’ll do it all on the track at St. Marks High School, and they’re hoping others will join them.

“People can go on and donate to one of the causes or they can actually run with us, whether for one leg or four miles,” Smith said. “They can run the whole thing with us, though nobody has signed up for that because they’re all smart.”

Smith said that like many Delawareans, he picked up a hobby during the early days of the COVID-19 lockdown.

“I really got back into fitness,” he said. “My then-9-year-old wanted to bike around everywhere, so I ran with him in order to keep an eye on him and whatnot.”

One day a constituent sent Smith a book to read called “Living with a SEAL: 31 Days Training with the Toughest Man on the Planet,” authored by Jesse Itzler, a businessman and co-owner of the NBA’s Atlanta Hawks.

The book chronicles Itzler’s month of living and extreme-fitness-training with a retired Navy SEAL and ultramarathon runner, David Goggins.

After reading the book, Smith decided to look a bit more into Goggins, who he learned participates in an annual challenge called 4x4x48 — or to outsiders, the “Goggins Challenge.”

Goggins does the challenge to raise money for the families of Navy SEALS who have died in combat.

“A friend of mine, Dave Henninger and I, decided that this would be one of our fitness goals for the year, and we wanted to use it as an opportunity to also support veterans,” Smith said. “It’s really a way of trying to help yourself physically and mentally while pushing your limits, and also trying to support the local community.”

Smith is raising funds for Blue Hens Veterans and Friends, the student veteran organization at the University of Delaware; 22in22: Bringing Hope to Heroes, a group aimed at stopping soldier suicide; and the Hockessin Fourth of July Fireworks.

“I don’t know anyone who’s a patriot or wants to be patriotic and doesn’t think that the Fourth of July fireworks display is … the greatest gathering of community that there is,” Smith said.

He acknowledges that the challenge will be difficult, but he said that however painful it is, it will still pale in comparison to the suffering faced by many veterans and their families on a daily basis.

Rep. Mike Smith after running the Disney Half Marathon/Facebook @ILikeMikeSmith

While Smith has never done the challenge before, he has been preparing in other ways.

“I’ve done overnight training where I’ve done four legs every four hours,” he said. “And then — this is gonna sound strange — but I did some sleep deprivation training.”

Last weekend, Smith ran in a Spartan Super, a 6-mile obstacle course race, on zero hours of sleep. Just 24 hours later, he ran a Disney Half Marathon on just four hours of sleep.

“I’ve tried different ways to prepare my body and my mind on what it’s going to be like,” he said.

Smith also has a podcast called “Mic’d Up with Mike Smith” available on Apple Music and Spotify. His co-host plans to run alongside them for one of the legs and interview participants for the show.

“We’re really just to try to build a sense of community,” he said. “It seems like times continue to get more tumultuous and this is just a way to shed some light on the sacrifices of our veterans so that we’re able to live with our freedoms.”

Click here to participate in the challenge or donate to the cause.