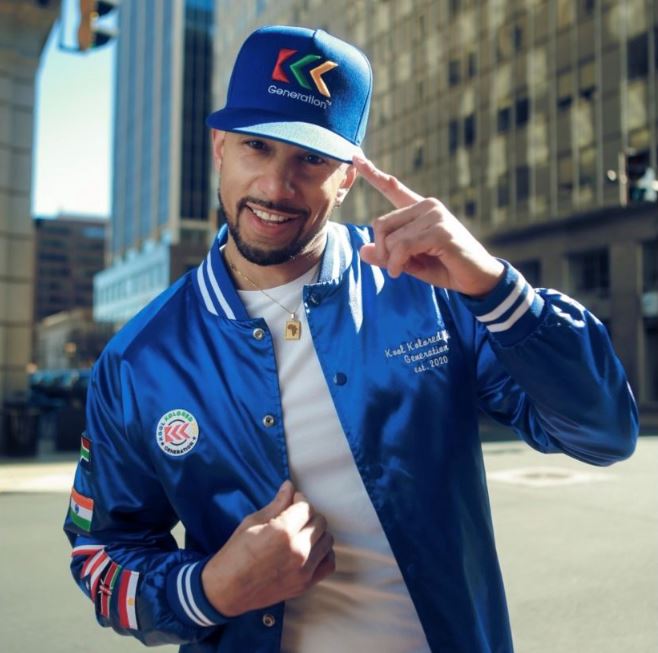 Randall Law is here to drop some knowledge.

Law is trying to do just that one graphic tee, satin jacket and snapback at a time.

His bold, visionary graphics feel contemporary, cool and most necessary.

Some of his designs put a today-spin on ’90s hip-hop nostalgia; others pay homage to cultural Black icons like national youth poet laureate Amanda Gorman, Vice President Kamala Harris and Malcolm X. The collection’s thesis statement is to empower kids and grown-ups of color throughout the country, to start a generational ripple-effect of change, and to flip the script on the acronym “KKK.”

The idea of Kool Kolored Kid has been with Law, in multiple iterations, since he was a 21-year-old actor and film festival production assistant living in L.A.

A creative kid growing up in South Bridge, Law fell in love with theater at age 10. His mother saw the passion in Law, so she helped guide him from art school to art school until his talents landed him at the prestigious New York Conservatory for Dramatic Arts.

“That got me a spot on ‘All My Children,’ I got to meet Rhianna, and, most important, I got a two-year internship with Shirley Faison,” Law says.

Faison, mother to Donald of “Scrubs” and “Clueless” fame, is a stalwart in the entertainment industry.

“She is a beacon of the theater world,” Law says. “She showed me the ropes with auditioning, how not to be stereotyped and type-cast into certain commercials … she really opened the door for me.”

When he graduated the conservatory, Law high-tailed it to L.A. He scored some work in a few independent films, continued his theater work and booked the high-profile, viral “Yes We Can” commercial for Barack Obama’s inaugural run for president. He also picked up some behind-the-camera work, as a lead production assistant for a few of L.A.’s most influential film festivals.

“We were sitting around at the L.A. Film Festival on a break and asking each other, ‘If you could name a band just for shock value, what would it be?’” Law remembers. “My answer was, ‘KKK: Kool Kolored Kid.’ And everyone was like, nah, you can’t do that one.’”

Law pocketed the name for a rainy day. That rainy day came a few years later, when he had relocated back to Delaware.

“The acting wasn’t hitting like I wanted it to, so I thought I’d take a breather, regroup, go back to Delaware for a while, see family,” Law says. “And then I saw just this dopest Gap commercial where the kids were every skin tone you can imagine. So then I thought, ‘That’s it. A kid’s clothing line called Kool Kolored Kid.’”

But at the time, Law says he was feeling a little down on his luck and depressed.

“I could act here in Delaware, but not to the level and opportunity I had in L.A.,” he says. “So I don’t think I was in a place then to have my ‘Yes’ moment with KKK Generation.’”

That moment came while watching a documentary on Netflix about the KKK.

“That’s when everything just aligned, man. It hit me like a ton of bricks to the point that I was tearing up,” Law says. “Kool Kolored Kid was going to be a clothing line, but with this change-making mission and aspect. After that, the ideas were like a faucet. I just couldn’t turn them off. I still can’t.”

Since that “Yes” moment, KKKGen has become Law’s main hustle, although he does keep a robust creative freelancing business and serves as brand ambassador for Lexus.

“My creative process is weird,” he says with a laugh. “One day I was listing to an Ed Sheeran album and his cover art spoke to me, it influenced my ‘X’ logo shirts. The ‘Kool in the 90s’ series features a pair of sneakers because I was thinking, ‘What does it look like for a ‘kool kolored kid’ to just be standing in their moment, in their individuality?”

In two years, KKKGen has grown to include satin jackets, like the “I’m Speaking” one that National Miss Juneteenth Saniya Gay draped over her shoulders as she traveled the country on speaking engagements.

“That collaboration, with a young voice who is speaking across the generational divide, was something that meant so much to me,” Law says.

There’s something else traveling the country, too: Law’s mission.

“I have been tracking these sales, and Kool Kolored Kid has been hitting in Texas, Arkansas, Tennessee, North Dakota, Maine, Florida, Minnesota, L.A. and more,” he says. “It’s been wild.”

Law’s efforts recently paid dividends with a grant from CitiTrends’s Black History Makers Awards. Kool Kolored Kid was one of ten national winners from an applicant pool of 7,000-plus. He’s also tight-lipped about some other news.

“Let’s just say there are some things in motion that can only help further elevate the brand, but I can’t talk about it quite yet,” he says.

While Law’s designs are slick, art-forward and cool enough to be your go-to summer fit, it’s not about the tangible product for Law.

“What moves me is giving, caring, hoping; dreams coming alive; systemic change; and that kid—maybe a special ed kid, maybe the only Black kid on a soccer field, maybe the only little brown girl in ballet—who feels visible and valued. That’s what’s up. That’s what we’re trying to do.”

Check out Law’s work at koolkkidgeneration.com

COVID numbers skitter around as vaccinations rise to 69.3% of eligible
Republican react to Carney's State of the State: Where's the beef, John?
State to open vaccinations April 6 to 16 and older; VA expands to all vets, families
Lewes man flies flag below black pants to honor U.S. soldiers