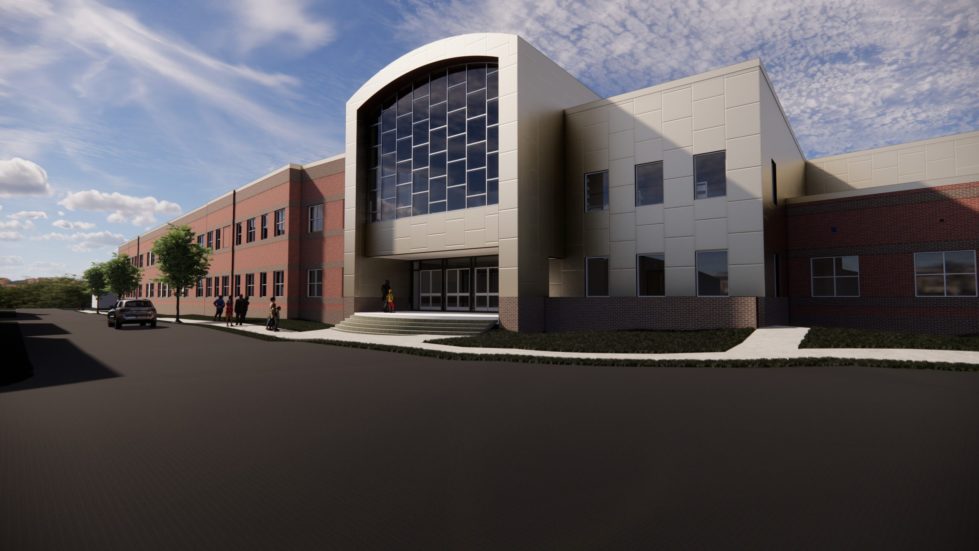 This artist rendering shows how the city plans to rebuild Bancroft Elementary School.

The city of Wilmington will pour $50 million into residential redevelopment, starting in the city’s historic east side.

That will include a new state-funded, state-of-the-art Bancroft School with classes and programming for students in first through eighth grade, as well as new athletic fields and after-hours programming.

The first $30 million of the city’s projects will be spent in an area bounded by Walnut to Church Streets and from Fourth Street to 11th Street, said a press release from the city. It was to get the $27 million in 2021 and the rest in 2022.

“What we’re trying to do is improve the neighborhoods that so many people remind me have been neglected for decades,” Mayor Mike Purzycki said in a short video accompanying the press release. “There are a lot of things you can do to improve people’s lives. One thing we can do is improve the environment where our kids grow up so kids walk around and don’t internalize all the decrepit buildings and all the fallen down infrastructure.”

The city will invest in construction, full rehabilitation of existing homes, facades, systems and roof improvements for current homeowners, and the demolition of dilapidated and vacant properties, the mayor said on his Facebook page.

Part of the city’s plan is to engage the owners of the several hundred vacant properties to either improve or sell the properties so they can be converted to productive living units. The city will use every tool available to encourage positive decision-making by landlord investors, the press release said.

“We’re going to help folks who’ve lived in their homes for 30 and 40 years but no longer can afford to keep them up,” Purzycki said in the video. “We’re going to tear down the old vacant homes that just plague the community. It’s got to be a little depressing to be there because you can see house after house is in terrible shape.”

Wilmington’s Neighborhood Stabilization Program will be paid for out of the city’s $55.6 million from the American Rescue Plan, a federal program designed to help communities recover from the COVID-19 pandemic.

It’s a once-in-a-lifetime opportunity to fix some of the city’s most pressing problems, the press release pointed out.

Officials have said that the money will be used for neighborhood revitalization, reducing gun violence, improving education, increasing access to capital for budding entrepreneurs, training City residents for employment, and stabilizing the government’s financial condition.

Wilmington’s Neighborhood Stabilization Program will include rehabbing homes like the ones pictured here on Bennett Street.

Improvements to east side neighborhoods will include 290 new and brighter streetlights to improve public safety, through a partnership with Delmarva Power.

Additional crime-reduction strategies will be announced in the coming weeks, but rebuilding neighborhoods is one effective method in reducing violence, the press release said.

The city and City Council have allotted another $4 million to fund workforce development by providing skills training and employment internships as well as an additional $5 million community investment to assist nonprofits in restoring programming for individuals, children and families, and to launch community-based efforts to curb gun violence.

The total neighborhood appropriations announced Wednesday are the largest amount of funding ever committed by Wilmington to its neighborhoods and their residents, the press release said.

City officials say they will use every tool available to encourage positive decision-making by landlord investors and make meaningful changes like this rendering of a corner shop shows.

UPDATED: An earlier version of this article incorrectly stated that Gov. John Carney plans to build a new high school in Wilmington.