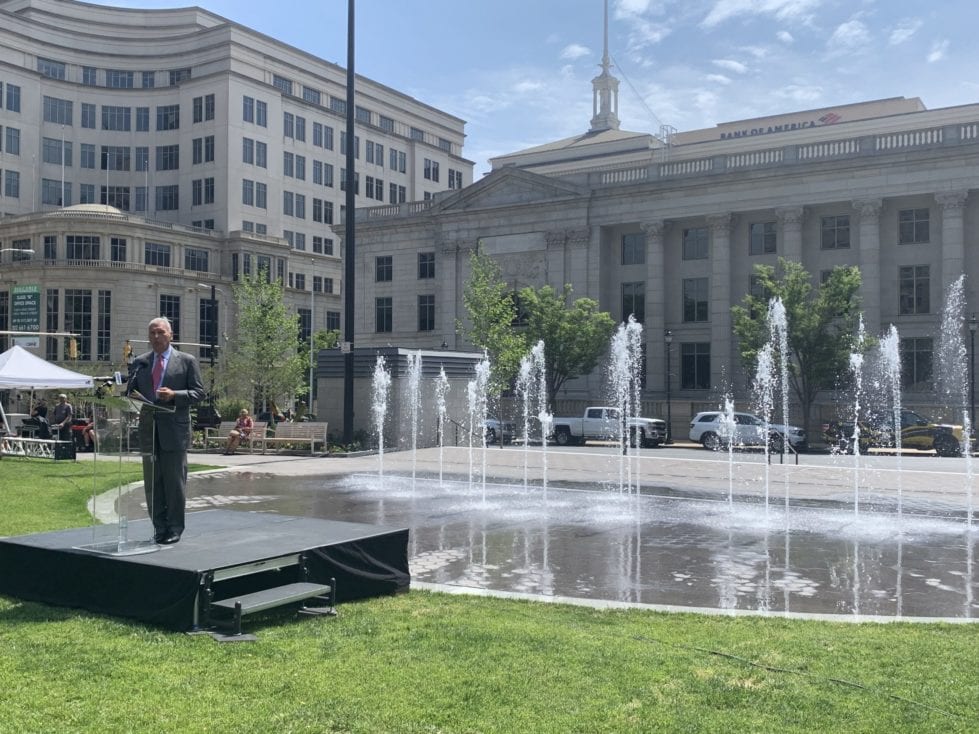 As Wilmington officials celebrated the continued refurbishment of Rodney Square, Mayor Mike Purzycki said future changes may include the return of the statue of Declaration of Independence signer Caesar Rodney.

“One of these days we might find a statue back here,” Purzycki said at the end of his remarks Wednesday. “Don’t ask! We’re going to get everybody together and think about how we’re going to do this. Whatever we do here, it’s going to be because we build a consensus around that decision. Hopefully, we’ll be able to have some real productive talks about that.”

The mayor’s comments came as the the city and members of the Rodney Square Conservancy marked about the addition of a new splash pad fountain, as well as the return of the sunny weather Farmer’s Market, Food Truck Wednesdays and outdoor dining tables and tents along Market Street.

The fountains are part of a $4 million in renovations and sprucing up of the square named for Rodney, who is said to have traveled back to Philadelphia in 1776, even though he was sick and in pain, so he could vote for and sign the Declaration of Independence.

The statue of Rodney astride a galloping horse and a statue of Christopher Columbus were removed from their pedestal in June 2020 after the death of George Floyd in Minneapolis led to an explosion of demonstrations, riots and national discussion over race and social justice. Statues of Confederal and Colonial figures were targeted by protesters who said they represented racism and slavery.

Rodney was a slave owner, and a number of other things in the state are named for him, including a Dover school system.

Purzycki ordered the removal of the statues with no fanfare, and issued a statement saying they were going into storage until there could be a discussion about their public display.

The mayor said he noticed when he was campaigning for mayor five years ago how tired and neglected the city’s center square looked. Then, it was bustling bus riders and one side was always covered in buses and bus passengers because it was a hub.

He said he thought then that the condition of the square didn’t say much about how the city thought about itself, and he committed himself at that time to making sure it was beautifully restored, along with other city parks and community centers.

Purzycki said the city, conservancy and private contributors plan to spend another $5 million-plus to finish Rodney Square, which has included new plantings around the property.

“It’s so good to see something happen and you can put your arms around it and say, ‘This is what we did,’” Purzycki said on beautiful early summer day.

One of the first things that the city and state did after Purzycki was elected was to dismantle the bus hub that had been at Rodney Square, spreading the stops around the city and forcing hundreds of bus riders to walk extra blocks to get home or to work. Protest efforts to block or combat that change failed.

A new Wilmington bus transit center opened in May 2020 near the Biden Train Station.

Purzycki said his favorite picture of Rodney Square was emailed to him a few days ago by someone who lives in a building overlooking the park. It showed kids playing in the water.

“So someone asked me, ‘Do you expect to have kids,’ and I said no. I want kids to be here,” Purzycki said. “I want the kids to come here to this park, and says this is ours, too, and it’s not just the business community. This belongs to all of us.

“I want the kids in the community to come to downtown, to come here, to go to the riverfront. We’re in this together and that was a great image.”