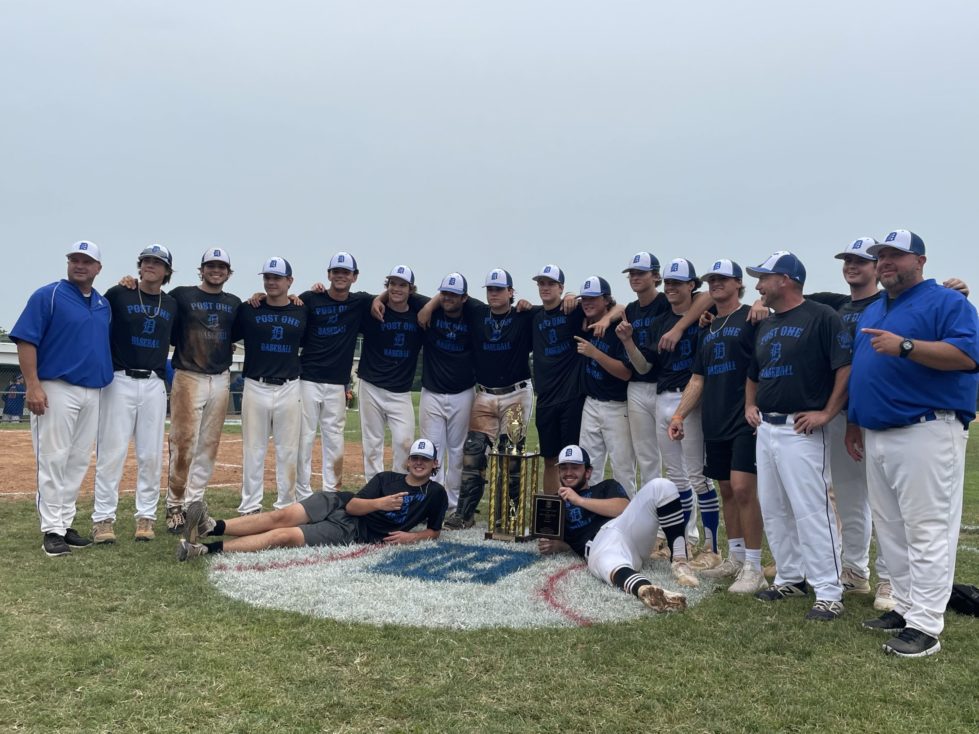 Stahl Post 30 came into the game needing to beat Post One twice in order to win the American Legion baseball championship. On Tuesday, Post One handed Stahl post a 15-3 loss. Stahl then went on to beat Del Vets yesterday 6-5 to advance to the finals and face off with Post one again.

Stahl Post 30 was ready for the challenge. Stahl would get the scoring started in the bottom of the 2nd inning as Dante Claudio and Wesley Mah each had RBI singles giving Stahl a early 2-0 lead. Post One would answer with a run of their own as Garrett Quinn led off the inning with a single. He would then be knocked in on a Braeden Scherer sacrifice fly bringing the score to 2-1

The bats however were hot for Stahl as they would send 10 batters to the plate in the 3rd inning which was highlighted by a 2 run homerun by Sam Devard who drove a curveball out over the left field fence at St Marks. Brandon Grygo would also come up big in the inning as he capped off the scoring with a 2 run double as Stahl totaled 5 hits driving in 6 runs in the inning giving them a 8-1 lead after 3.

In the 4th it was the bats from Stahl striking again. Jake fallers would lead off with a double followed by a single from Soloman Devard and a walk from Sam Devard. All 3 would eventually score in the inning giving Stahl an 11-1 lead after 4 innings.

On the mound for Stahl Post 30 Payton Brannock threw a gem. Brannock had great control throughout the game and did a great job of mixing his pitches which kept the Post One batters off balance all day. He was able to draw double digit flyouts and never allowed any real solid hits. Payton pitched all 5 innings of the game only allowing 1 hit and 1 run with 2 k’s.

The 11-1 win for Stahl Post would force a second game to decide the state champs.

In game 2 the tides would change. Post One came out and jumped on top in the bottom of the 1st inning. Jackson Tyer started things off with a single followed by 2 RBI doubles by Braeden Scherer and Ben Anderson giving Post One an early 2-0 lead. Post would tack on another run in the 2nd inning as Jack Szczerba drew a leadoff walk and eventually was knocked by a Garrett Quinn single giving them a 3-0 after 2.

Ben Anderson hit a double in the 1st inning

Post would break things open in the 5th inning as all 5 of the first hitters of the inning would score. The inning was highlighted by Scherer knocking in 2 more runs with his 2nd double of the game. Jameson Summerill, Anderson, and Szczerba would add singles and Kevin Williams laid down a great bunt as 9 batters went to the plate for Post One giving them a 8-0 lead. Post One would add 2 more runs in the top of the 7th giving Scherer a 10 run lead.

Scherer was doing it at the plate and on the mound. Braeden ended the game at the plate 2-4 with 3RBI’s and 3 runs scored. On the mound he was dominant. He took a no hitter into the 6th inning before finally giving up his first hit. He was in control the whole game. Scherer threw a complete game with 8k’s allowing only 1 hit over 7 innings.

Braedon Scherer took a no hitter into the 6th inning

Post One will now advance to play in the Mid-Atlantic regional tournament in Asheboro, North Carolina. Their first game is scheduled for Wednesday August 4th at 9:30am

Interview with Coach Brian Ratasiewicz & Braedan Scherer from Post One

Student mask mandate extended; testing programs set for December
What to do, expect when you go hunting for a COVID-19 vaccine in Delaware
Photos: Highlands parade, party at art museum
Lawmakers work to ensure low-income, disabled get relief checks